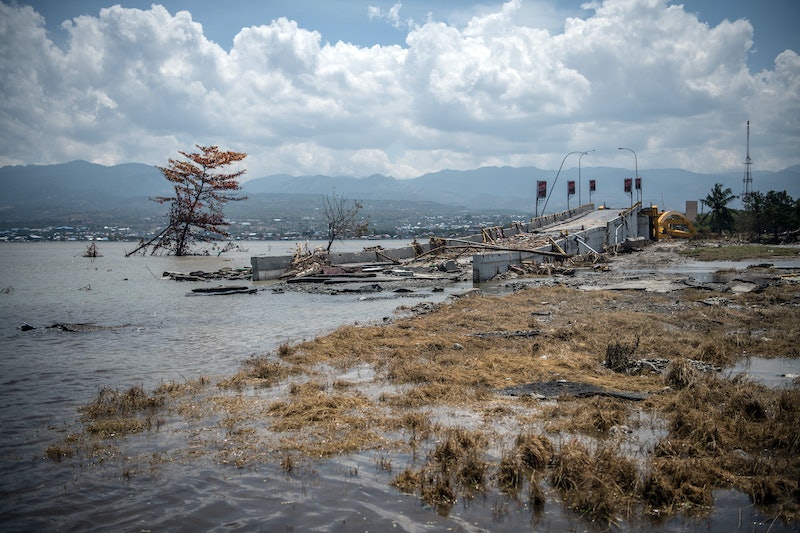 Hundreds are dead and many more are injured or missing after a tsunami struck parts of Indonesia on Saturday. The water arrived at night after the Krakatoa volcano erupted and caused underwater landslides. This video of the tsunami in Indonesia shows how it struck without warning. A rock band was giving a concert when the wave came ashore and crashed into the stage.

The video has been shared widely online and is short. The group Seventeen is on stage at the Tanjung Lesung beach resort, and then all of a sudden water comes crashing through the back of the stage and towards the audience. The tsunami hits the band first and the crowd starts to run for safety.

No warning went off about the tsunami, Sutopo Purwo Nugroho, the head of public relations at Indonesia's National Disaster Mitigation Agency told CNN. "We used to know that a tsunami happens after an earthquake. There was no quake last night. That is why there was no warning," Nugroho told the network. "We need multi-hazard early warning system."

Several members of the band were killed, according to the BBC. The singer, Riefian Fajarsyah, posted an emotional Instagram video telling of the deaths of the bassist and road manager. Other band members and his wife remain missing. "The rest are thankfully safe although suffering from injuries and broken bones. Please pray so my wife Dylan, Andi and Herman and Ujang can be found soon," Fajarsyah said in the video.

At least 222 people were killed. Another 843 people have been injured and 28 are still missing, according what Nugroho told CNN. Also 558 houses were destroyed, while nine hotels, 60 restaurants and 350 boats were damaged. The tsunami affected parts of both Java and Sumatra.

Oystein Lund Andersen, a Norwegian volcano photographer, was staying at a beach hotel where the tsunami struck. He told the BBC that he saw the wave coming becuase he was on the beach to take pictures of the eruption. He ran to the hotel and woke up his family before the big wave hit. "We and other people at the hotel went straight to the forest (on higher ground) next to the hotel," Andersen told the BBC. "And we're still up on the hill now."

While there was no warning before the tsunami on Saturday, siren "started ringing all of a sudden, without any activation from the authorities" on Sunday, Nugroho told the BBC. "There was possibly a technical error that made the sirens ring. Lots of people ran to save themselves," Nugroho said. "Tsunami shelters are now packed."

Saturday's tsunami is not the largest this year in Indonesia. In September, some 2,000 people died after a powerful earthquake near the island of Sulawesi. Relief efforts continued into October. The largest tsunami affecting Indonesia was in 2004 when more than 200,000 people died in 13 countries. No major improvements have been made to the tsunami warning system since then, Nugroho told CNN.

Relief efforts are underway on Sunday, with the Red Cross and Red Crescent dispatching 20 workers to assist the government with logistics and the rescue of any survivors.