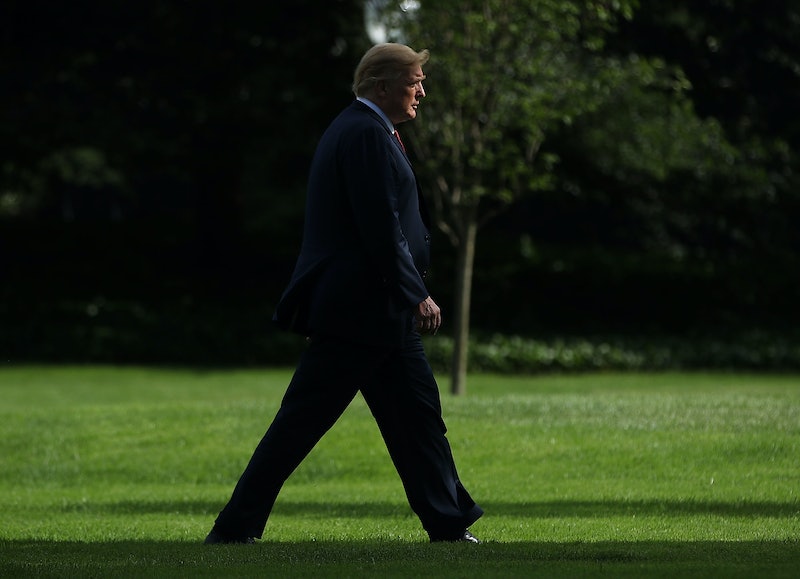 After authorities confirmed that at least five people were killed in a shooting at the Capital Gazette in Annapolis, Maryland, various lawmakers — including the president — shared their condolences. But it didn't seem like that President Trump had anything else to say about it besides a tweet on Thursday afternoon. In response to reporters' questions at the White House about the Capital Gazette shooting, Trump simply ignored them and walked away.

In an NBC News' clip, Trump is seen walking away from the media as reporters ask questions such as, "Can you please talk to us about the dead reporters in Annapolis?" and "Do you have any words of condolences for the families, Mr. President?"

Another reporter is heard asking, "Why are you walking away?" One more shouted, "Why don't you come and talk to us about that?"

In the video, Trump does not say a single word. He waves a few times and briefly glances at the crowd until he disappears into the White House. It was a visual that seemed to shock many. POLITICO investigative reporter Josh Meyer retweeted the video and said, "Every journalist, and those who support us, should retweet this. I can't think of a single other President in my lifetime who would have acted like this. Perhaps he fears questions about whether his anti-media rhetoric played a role?"

Shortly before the video of Trump walking away from the press was revealed, the president shared a brief message on the incident on his Twitter. "Prior to departing Wisconsin, I was briefed on the shooting at Capital Gazette in Annapolis, Maryland. My thoughts and prayers are with the victims and their families. Thank you to all of the First Responders who are currently on the scene," Trump wrote.

The NBC News video elicited expressions of concern and shock from thousands, including members of the media. Booking producer for MSNBC's Morning Joe, Michael Del Moro tweeted, "This is a bit difficult to watch." Columnist for the Boston Globe, Michael Cohen said, "I watched this video live and it took all my self-control not to hurl something at the television. Five journalists killed in a newsroom and the president of the United States can't even be bothered to speak to reporters about it."

But perhaps the most recurring comment was related to the many remarks Trump made about the press time and again. Ever since he won the election, the president of the United States has repeatedly criticized the media, including describing journalists as "the enemy of the people."

In 2017, Trump delivered a speech at the Conservative Political Action Conference and proudly boasted, "A few days ago I called the fake news the enemy of the people, and they are — they are the enemy of the people." In other bizarre instances, Trump has shared images of networks like CNN getting physically attacked in a wrestling match.

The non-profit organization Vote Vets retweeted the video with comments saying, "Reporters put their lives on the line, getting wounded and dying, covering us when we went to war. They, the five who died today, and all the rest are not 'enemies of the people,' as Trump called them. Below is a person who is too weak to face up to those big words, today."

Whatever reason the president had for not responding to the many questions posed by an understandably worried press, many observers interpreted Trump's reaction, or supposed lack thereof, as a display of callous indifference. Just one look at the Twitter responses to the NBC News clip show that people are not only stunned by Trump walking away — they're furious.