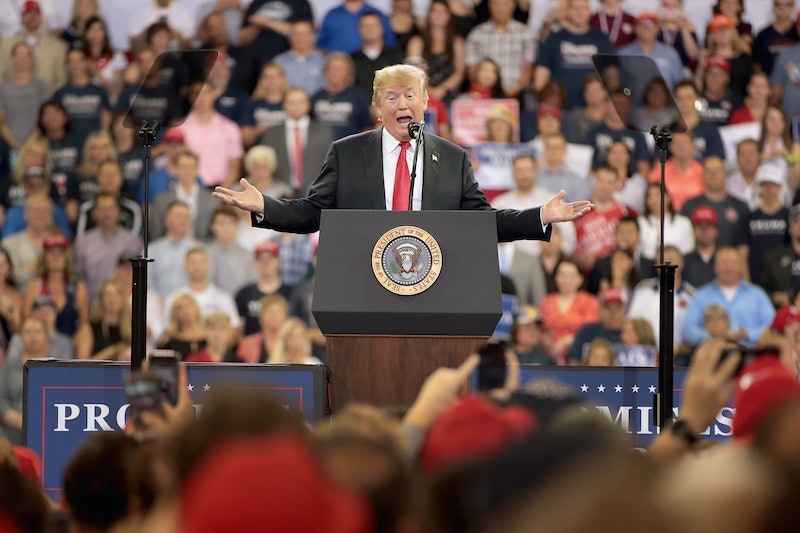 Taken during a Wednesday night rally in Duluth, Minnesota, video of Trump mocking a protestor quickly began to circulate online, proving the president hasn't really changed in certain ways since the days of his presidential campaign. Throughout his campaign and the duration of his first term as president, Trump has racked up a long list of insults against citizens, protestors and reporters alike. The source of this latest protestor's anger wasn't completely clear in the video, but Trump's response was the same.

According to The Hill, at least two protestors interrupted Trump's rally in Minnesota. The rally came following the announcement of his intention to put an end to the family separation policy that has enraged a large portion of the American public, as well as countless immigration rights and international human rights organizations.

The Hill reports that the activists held up signs, disrupting the rally. One of the posters seemed to be a photo of Trump with another person, though the other person was unidentifiable from the videos. As the protestors were escorted out of the rally, Trump said to the crowd, "Was that a man or a woman? Because he needs a haircut more than I do."

The Hill reports that the crowd cheered to his comments, slowly merging into chants of "U-S-A". Though Trump's sentiments at the rally on Wednesday were focused on his friendship with North Korea, as well as his disgust with John McCain and his assurance that border security was still a top priority, his response to the protestor was a tired story.

The New York Times has kept a thorough record of the number of people, groups, and institutions Trump has insulted on Twitter during the course of his presidential campaign and time in office. As of June 10, 2018, the number is up to 472, including such notable individuals as Ted Cruz, Samantha Bee, David Brooks, Seth Meyers, Snoop Dogg, Meryl Streep, and Oprah Winfrey, to name a few.

But an insult on Twitter is nothing compared to the level of criticism he received on the campaign trail in 2015 for his imitation of a disabled reporter, Serge Kovaleski.

Of the mockery, Trump defended himself to The Washington Post by claiming he couldn't even remember what the reporter looked like, or had any awareness of the reporter's condition. “I have no idea who this reporter, Serge Kovalski [sic] is, what he looks like or his level of intelligence. I don’t know if he is J.J. Watt or Muhammad Ali in his prime — or somebody of less athletic or physical ability,” Trump said, which didn't seem to answer the question of why he would insult anyone to begin with.

In the above video, Trump took on protestors at a Phoenix rally in a similar manner. "That's OK," he said, "I wonder if the Mexican government sent them." At another rally, Trump threw out a group of protestors in Burlington, Vermont, without even allowing them to get their coats.

Trump also has a long history of insulting women who have called him out for his policy or alleged behavior in the past. According to The Cut, Trump said of fellow Republican candidate Carly Fiorina during his campaign, “Look at that face! Would anyone vote for that? Can you imagine that, the face of our next president?! I mean, she’s a woman, and I’m not supposed to say bad things, but really, folks, come on. Are we serious?”