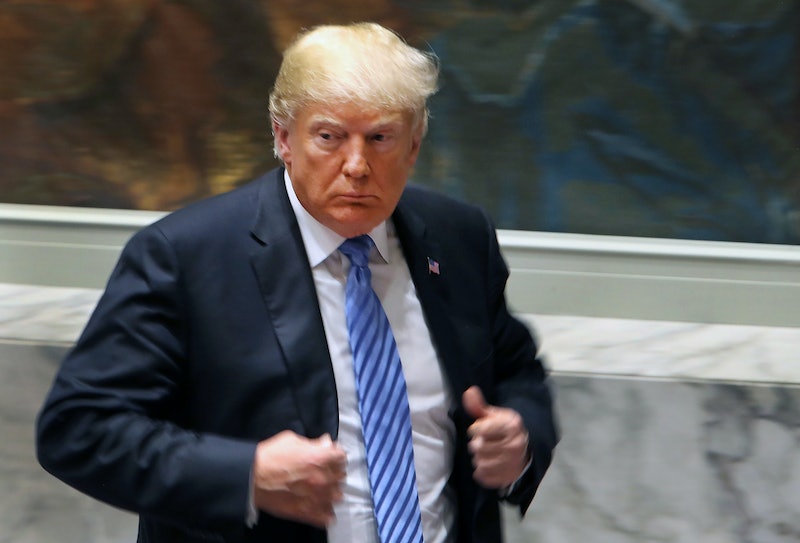 On Wednesday, President Trump held a rare solo press conference in which he answered questions on a range of topics. At one point, while calling on a Kurdish journalist, Trump referred to him as "Mr. Kurd" in a remark that caught many on Twitter completely off guard.

"Yes, please, Mr. Kurd, go ahead," Trump said with a slight smile. The reporter then posed a question about "the U.S. relationship with the Kurds, post-ISIS."

"We're trying to get along really well," Trump said. "We do get along great with the Kurds. We're trying to help them a lot." Trump added that Kurdish soldiers fought alongside U.S. troops against ISIS: "They fought with us. They died with us — they died."

He had called on the reporter just moments earlier in the press conference, during which Trump asked if he was Kurdish and remarked that Kurds — an ethnic group in parts of Iran, Iraq, Syria, and Turkey — are "great people, great fighters."

The Wednesday conference elicited disbelief as Trump had several noteworthy moments. In one instance of attempting to show Democrats as unfair and biased, Trump said, "If we brought George Washington here, and we said we have George Washington, the Democrats would vote against him. And he may have had a bad past, who knows."

It was during the same conference that Trump expressed delight at the reporter's ethnic background. "Good, good," he said of Kurdish people, "I like 'em a lot."

Of course, the president's descriptor for the journalist caught the attention of Twitter users. For some, it was perhaps simply too outlandish or unbelievable to imagine the president of the United States referring to a journalist by his or her ethnic background.

Others dreaded the social media outcome of it. As it so happens with Trump's various comments, jokes, speeches, and verbal as well as written gaffes, such snippets become temporary memes. Trends, if you will. This particular person, Media Matters' editor Parker Molloy, simply tweeted, "Dammit, 'Mr. Kurd' is going to trend now, isn't it?"

For others, the president's title for the reporter forced them to tweet about the conference they otherwise claimed they wouldn't discuss online. CNN's Brian Ries tweeted, "I promised myself I wouldn't live tweet Trump's press conference but he just called this guy 'Mr. Kurd' and wow."

A New York Times reporter, Michael Grynbaum, tweeted that he met with the reporter. "I just spoke with 'Mr. Kurd.' His name is Rahim Rashidi, he works for Kurdistan TV, and he is thrilled. 'I love it,' he said of Trump. 'He made me happy by this sentence.'"

But the disbelief continued. Perhaps the reason for this incredulity was that presidents normally do not refer to a reporter's ethnicity while fielding their questions.

Some even pitched Trump's descriptor as a possible TV show.

Whether some agreed with the title or not, it was clear that Trump's manner of addressing the reporting was instantly a trending topic on Twitter.

More like this
'Heartstopper’s Kit Connor Quits Twitter Amid “Queerbaiting” Accusations
By Sam Ramsden
Camilla Paid Tribute To The Queen In A Heartfelt Video Message
By El Hunt and Sam Ramsden
How To Follow The New Royal Family Social Media Accounts
By Sam Ramsden
Elton John, Sir David Attenborough & More Celebrities React To The Death Of Queen Elizabeth II
By Sam Ramsden and Jake Viswanath
Get Even More From Bustle — Sign Up For The Newsletter