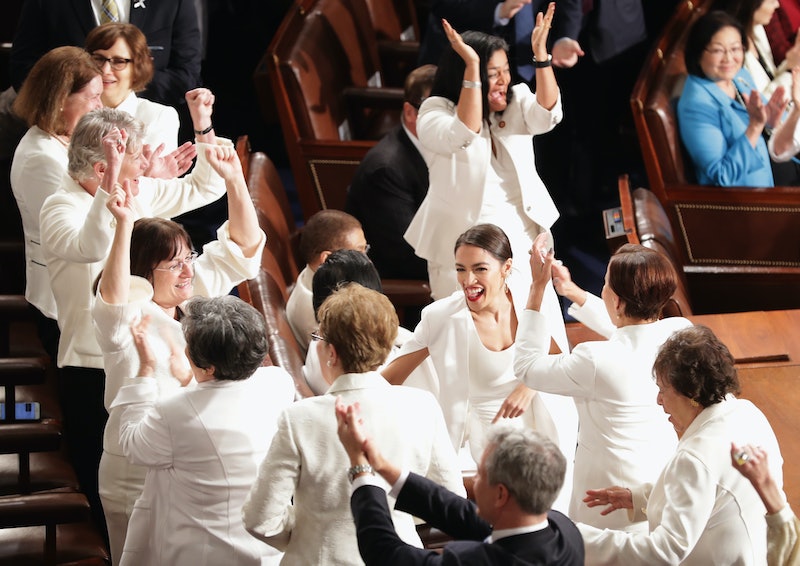 President Trump gave a few shoutouts to women during his 2019 State of the Union — including that there are reportedly more women in the workforce than ever, as well as the fact that there are currently more women in Congress than ever before. It was one of the first moments of his speech that the entire room could get behind. Videos of women standing during Trump's State of the Union capture the importance of the moment — and the importance of their work in the 119th Congress.

After arguing for the importance of a border wall, Trump switched to a subject that both parties could get behind. Trump said, according to a transcript of his speech from Vox:

As we work to defend our people’s safety, we must also ensure our economic resurgence continues at a rapid pace. No one has benefitted more from our thriving economy than women, who have filled 58 percent of the new jobs created in the last year.

Many people in the room stood and applauded, including the women lawmakers who were wearing suffragette white, even if some of them did so reluctantly, as the video clip below shows. Then Trump said,

And that's when he dropped the news that made the room collectively cheer. He said, according to the transcript:

And exactly one century after the Congress passed the constitutional amendment giving women the right to vote, we also have more women serving in the Congress than ever before.

After clapping, the crowd erupted into chants of "USA! USA!," and this time the women joined in, according to video from CSPAN:

Although Trump is correct that women — millennial women, specifically — are getting jobs at the highest rate since 2000, there's little evidence that it has anything to do with his policies, as Bloomberg reported in January. Rather, Bloomberg noted that the trend of more women joining the workforce is likely due to a couple things: a cultural shift that has led to more women getting college degrees, and the fact that women joining the economy are delaying having kids or weddings.

The Women's Initiative at the Center for American Progress criticized Trump's point about women's employment on Twitter, writing:

Almost 4.1 million employed women work multiple jobs to make ends meet and meanwhile, workers' wages are still stagnant. Women are a key part of the economy, but the Trump administration's policies continue to leave them behind.

Trump is also correct that there are more women in Congress than ever before, and the room agreed that that's a great thing. But prior to the State of the Union, a number of Congress members noted that the women of Congress were wearing white as a message to the administration, which they believe isn't actually helping women.

Rep. Brenda Lawrence, a leader of the Democratic Women's Working Group, said at a press conference, according to The Hill: "Today we stand together wearing white in solidarity with the women of the suffrage movement who refused to take no for an answer. To an administration that has closed its eyes to women, we will be seen."

More women in Congress — the room agreed that that's worth cheering for. Whether it's President Trump who deserves the cheering, or the women who did the work to win their record-breaking number of seats — the consensus on that is far from unanimous.