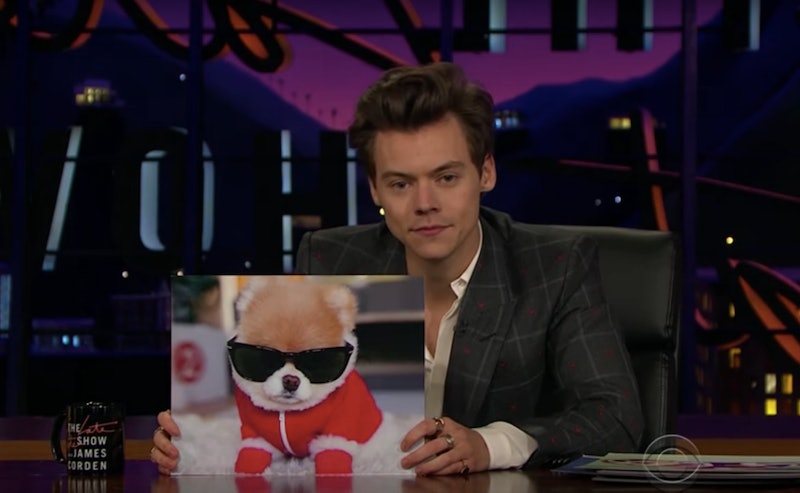 As if the bromance between Harry Styles and James Corden couldn't get any more adorable, this happened: On Tuesday night, Harry Styles hosted The Late Late Show after Corden's wife, Jules, went into labor and gave birth to a baby girl. And even though Styles is a musician, not a late night host and was clearly totally out of his element taking over Corden's duties, he actually did a pretty impressive job — especially since he agreed to do it with just two and a half hours' notice and went straight to the studio from the hospital, where he'd been visiting their new baby.

Styles kicked off the evening with a monologue exactly how Corden does, even talking about American politics and events like the Alabama Senate election. Since it was such a last minute thing, there's a very good chance that the monologue was written for Corden and his delivery, and yet Styles still managed to pull it off. He was incredibly proud of himself when he told a joke about Roy Moore that he said he came up with himself — until he quickly and quietly admitted that he didn't.

The monologue wasn't the only segment of the show where he killed it, though — the whole thing was actually really impressive.

In fact, it's hard to decide what the best part of the episode was. Was it Styles dancing along to the band? Was it when he started talking about dogs in sunglasses? Was it his adorable giggles as he laughed at his own jokes? It's impossible to choose just one moment.

And according to Twitter, this is exactly how most of Styles' fans feel. There are some who were offended by his joke about deportation (he joked that Trump had Corden deported back to the U.K.), but there are far more people are freaking out about his surprise hosting gig. It seems like the majority of his fans are seriously impressed with how well he did.

As part of his hosting duties, Styles was also responsible for interviewing guests Owen Wilson, Jane Krakowski, and Joel Edgerton. And even though he's usually the one answering the questions instead of asking them, he passed that part with flying colors, as well. The topics were wide ranging — Krakowski talked about Elf on a Shelf and Wilson talked about racing Usain Bolt — and it seemed like this was something Styles had been doing his entire life.

This is the second time this week that Styles and Corden are making headlines. On Monday night, the Christmas edition of Corden's popular segment Carpool Karaoke included a smooch between him and Styles that left so many fans jealous — something that the singer also referenced in his monologue, because how could he not? The moment is pretty unforgettable, and people are still talking about it.

As far as the newest addition of Corden's family goes, it seems like both mom and baby are doing well. No word on what name he and his wife have chosen, but according to his tweet on the subject, everybody is happy and healthy.

Styles is a true friend for stepping in like that. After all, Corden left him some pretty big shoes to fill in his absence. But Styles truly stepped up to the plate on this one.

If Corden ever needs to take time off of the show again, he knows exactly who to call. At this point, it's pretty obvious that Styles needs his own late night show. Who could ever get tired of watching him talk about dogs wearing sunglasses?

More like this
Why Harry Styles & Olivia Wilde Make A Great Couple, According To Astrology
By Nina Kahn
'Grey's Anatomy's New Intern Got Advice From Dr. Bailey Herself
By Grace Wehniainen
Paul Mescal, Man Of Mystery
By Samantha Leach and Heather Hazzan
Nicola Coughlan’s Description Of Meeting Olivia Colman Is Just So Nicola Coughlan
By Sam Ramsden
Get Even More From Bustle — Sign Up For The Newsletter