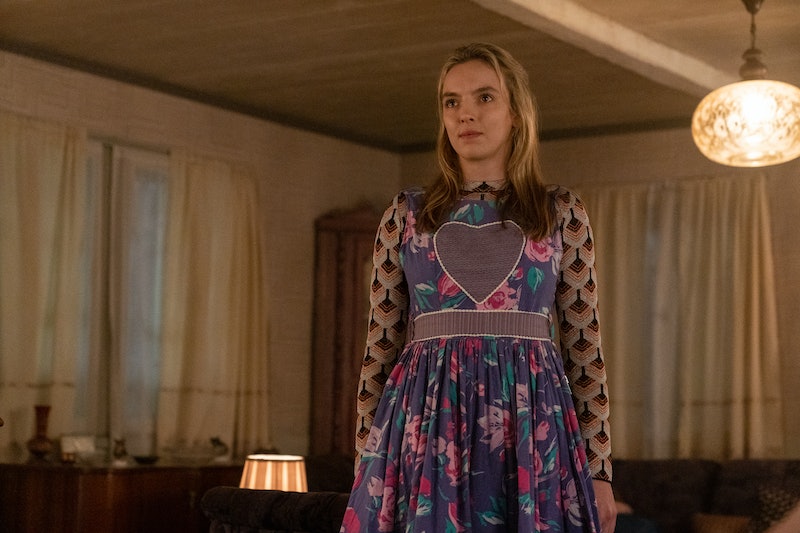 “You were bad from the beginning,” Villanelle’s mother tells her on the most recent episode of BBC America’s Killing Eve. “You didn’t cry as a baby.” Their dead-of-night showdown marks the end of the orphaned assassin's impromptu trip to Russia to reconnect with her family. She’s already been surprised to discover her brother still lives with their mother, who is remarried, and she learns she has a quirky young half-brother with an Elton John obsession. It’s not that Villanelle's mother abandoned everyone, it seems; Villanelle (née Oksana) was singularly unwanted. “You ruined me,” her mother accuses, pleading with her daughter to leave.

Since the end of Season 2, Villanelle has been persistently asking questions about her roots. "Knowledge is power," she's said in the past. In Russia, she finally meets people who call her Oksana, the name she had from before the orphanage. But Villanelle's mother isn't eager for a reunion. Rather than apologize for relinquishing Oksana, she tries to justify it. “You took everything from me,” she says. “He would do anything for you because you had a darkness.”

According to her mother’s version of events, Oksana was less a child than a competitor. Villanelle contests the account — “Please? Some bullsh*t myth to make you feel better?” — but doesn't seem to be confused by who "He" could be. It feels likely “he” is Villanelle’s father, in which case she seems to remember him — not necessarily his identity, but the role he played in her early life.

Villanelle doesn’t deny the control she wielded within their family; she just wants her mother to acknowledge the similarities between the two of them. “I am my mother’s daughter,” she tells her, begging for validation. When it’s refused, Villanelle kills her and burns down her home. But in a surprising act of compassion, she spares her brothers’ lives; for the youngest she leaves enough cash to go see his idol perform. Villanelle isn't jealous that they weren’t left at the orphanage, too. She’s here to liberate them from the cold shadow of their mother’s neglect. In other words, their mother's own darkness.

“He thought you would do something to us — to me,” Villanelle’s mother insists without much explanation, pitching her abandonment of Oksana as a bid to save herself from her daughter's darkness. But something doesn't quite add up. “You took him,” she accuses. “You could control him.” But if this account of Villanelle's power over "him" is accurate, would such a person be able to relinquish Oksana as fully as her mother was able to foresake her? It seems possible that the unnamed figure hovering over their argument — father or not — could have yearned to stay close, possibly even inserting himself into the new life of Villanelle. Who is Villanelle's father? As Season 3 wears on, we might be about to find out.