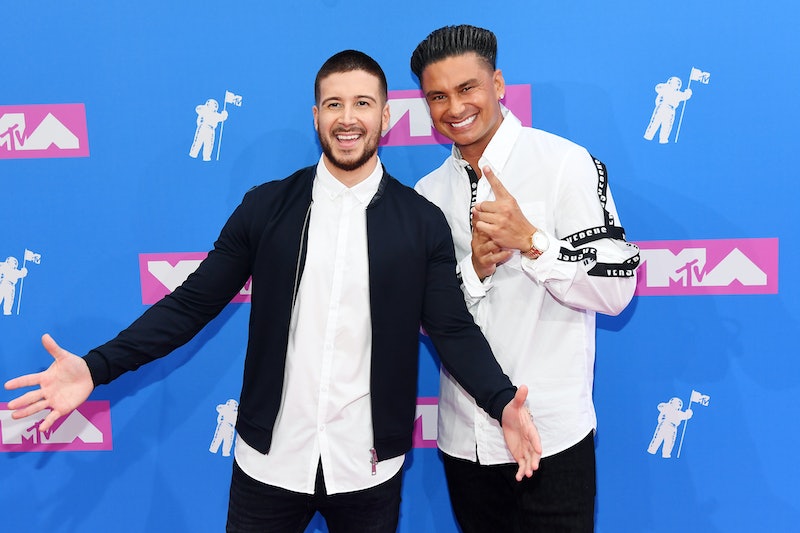 No, this is not a carbohydrate-induced fever dream. This pair of beloved gymming, tanning, and laundering reality television personalities are going to star in a Bachelor-meets-VH1 celebrity dating shows of the 2000s -meets-Jersey Shore dating competition series. Aw, yeah. Finding love on national television alongside your best buddy on a show, yeah. Channeling the halcyon days of '00s VH1 dating shows, yeah.

DJ Pauly D and Vinny met about a decade ago while filming the first season of Jersey Shore, and their friendship has been shining like Pauly D's impressive collection of diamond necklaces ever since. They were two of the eight housemates picked to stay in a beach house on the Jersey Shore, work at a T-shirt store on the Jersey Shore boardwalk, and party their brains out at the various Jersey Shore nightclubs. The show ran for six glorious seasons and spawned multiple spinoffs. In 2018, two beautiful seasons of the reunion series Jersey Shore: Family Vacation happened.

And now we are about to get another Jersey Shore spinoff. Double Shot at Love with DJ Pauly D & Vinny is the duo’s first dating competition show, but it is not Pauly D’s first relationship-focused reality series rodeo. In 2016, the Jersey Shore DJ was on E!’s Famously Single, a program that plopped a bunch of single celebrities in a house where they could try to work out their own romance stuff. It was there where he struck up a relationship with singer Aubrey O’Day and became famously un-single. O'Day and Pauly D would go on to appear on Marriage Boot Camp, and the couple broke up in July 2017.

May Double Shot at Love with DJ Pauly D & Vinny never not be fresh to death.