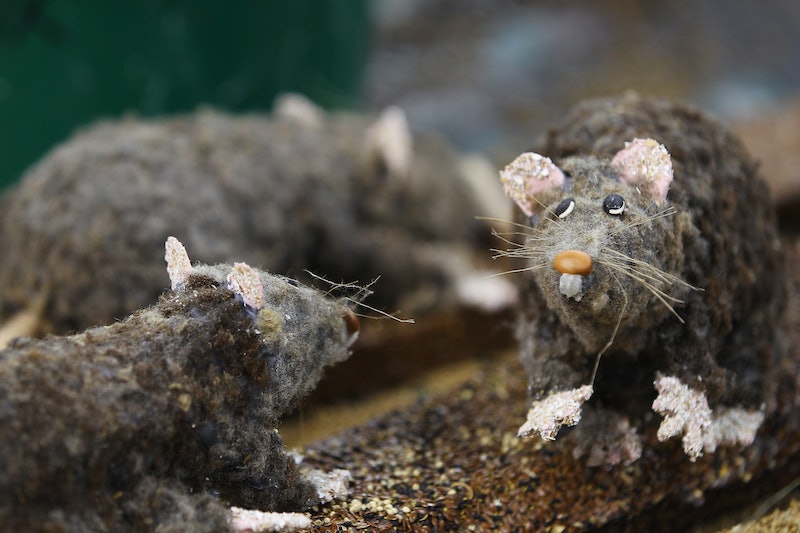 Typically, I’m really grossed out by rats. I cannot overstate how much they usually make my skin crawl. They rummage through the trash, carry diseases, and have long, creepy tails, but the viral shower rat may have changed my attitude towards rats (for now). But as it turns out, 2018’s most lovable rodent isn’t at all what it seemed, and in fact, is more than any of us could have imagined. Since the original video went viral late in Jan., numerous reports surfaced that the "shower rat" is actually an animal called a pacarana, a slow-moving rodent from South America that can weigh up to a whopping 30 pounds. (For context, that's roughly the weight of an 18-month-old human infant.) Pacaranas are more or less in the same family as a rat, but let’s be real, if you saw a 30 pound rat in the subway, you’d probably (definitely) be slightly mortified.

DJ Jose Correa claims to have posted the original viral video of the supposed rat that appeared to be showering like a human. “I’ve never seen anything like it,” Correa said to UK’s Metro. “It went on for about 30 seconds, and then he ran off. I think he just wanted to give himself a good clean.” Correa said he saw the rodent right before getting into a public shower in Peru.

In the video, the pacarana appears to be covered in soap, which it's washing off like a human. Dallas Krentzel, a biologist at the University of Chicago, told Newsweek that pacaranas shouldn’t be covered in soap because it’s “unsafe and potentially inhumane.” Correa denied putting the soap on the animal in Metro. “I care a lot about animals, so I wanted to protect his privacy. I would never want to hurt him. So I just filmed him and let him go,” he said.

But why do pacaranas move like that in the first place? Krentzel explained to Newsweek, “It makes sense that this animal could wash itself like a human because it needs that forelimb mobility for foraging and food processing,” he said.

Most of the internet was shocked by the pacarana’s human-like movement, but the pacarana's movements recorded by DJ Jose Correa isn’t unique, according to video of other pacaranas in the wild. Facebook user David Sobrá posted videos of pacaranas using very similar (humanoid) motions as the pacarana formerly known as shower rat. In Spanish, Sobrá explains that he doesn't think "the goal was to hurt the pacarana, but rather wash it like all of us wash our dogs, cats, ferrets with soap."

Despite the controversy over whether the soap was hurting the pacarana, most people were surprised to learn that the animal wasn't a rat at all. Of course, Twitter’s reaction to how big pacaranas are was actually priceless.

Seriously, who expected this rodent to be that ginormous? I know I didn’t.

The pacarana formerly known as shower rat joins other viral rats that will live on forever in hashtag form. Remember #PizzaRat? It was seen carrying an entire slice of pizza in a New York subway. It clearly was taking it back to feed its rat family, so #PizzaRat gets nothing but respect around these parts. #PizzaRat was seen scurrying about in 2015, but it’s clear the rat community has become a little more health conscious since then. In late 2017 #AvocadoRat, #Pizzarat’s gluten free cousin, was also spotted in a New York City subway, in Brooklyn. (Go figure.) Is it just me or does it seem like the famous rat community is a thriving example of cooperative food sharing and good hygiene? Although this rat didn’t get a hashtag, a rat seen crawling over cookies on display at a mall food court inspired enough Chef Ratatouille jokes to last a lifetime. Jury is out on whether or not viral pacaranas will similarly pick up steam.