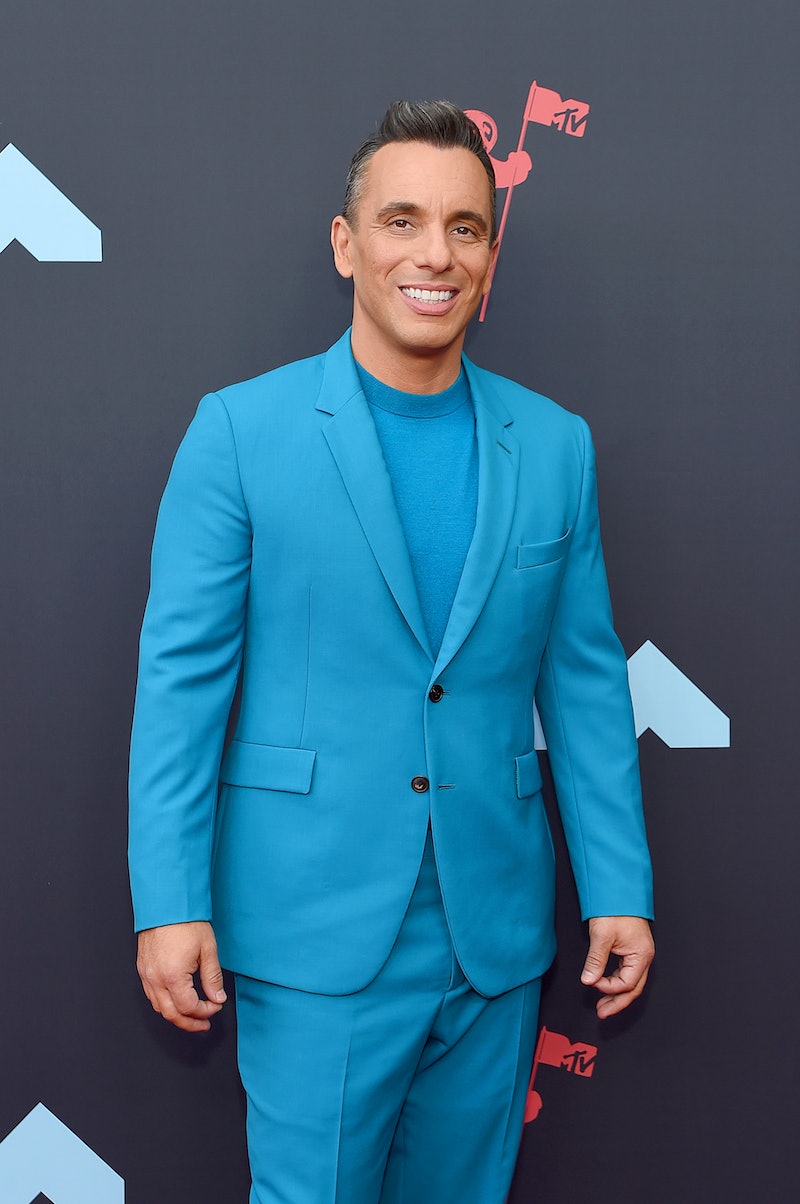 This year's MTV VMAs host may have started the 2019 show on the wrong foot, as far as Twitter is concerned. VMAs host Sebastian Maniscalco joked about viewers being "triggered" during his opening monologue and viewers were not having it at all. Maniscalco's opener started out innocent enough with lots of references to the VMAs' move to New Jersey (this year's show is happening in Prudential Center in Newark, New Jersey). But then things went south.

Maniscalco told the audience, "This is happening for the first time. MTV, what they're doing is they noticed we're living in ultra-sensitive times, so if you feel triggered, or if you feel offended by anything I'm saying up here or anything the musical artists are doing — they're providing a safe space backstage. You'll get some stress balls and a blankie." He continued the joke by saying that Lil Nas X's horses, which are mentioned in his hit song "Old Town Road" (the now-famous lyric goes, "I got the horses in the back"), are in the back — backstage that is — and they will serve as "emotional support animals" for those who wish to occupy the "safe space." Maniscalco is known for his observational humor, but the tone wasn't appreciated by viewers.

To say the joke didn't go over well on Twitter is an understatement. Many VMAs viewers voiced their disapproval of the joke, as well as their disappointment that "triggered" jokes are still something being made in 2019.

Several people on Twitter thought the joke was old school in a negative way and should be retired immediately.

Some took issue with other parts of Maniscalco's opening monologue, which included condescending references to influencers in Los Angeles taking photos in front of walls and riding Bird scooters, as well everyone getting a trophy for participation.

One Twitter user thought Maniscalco's jokes unfairly took aim at millennials, which is the target demographic for the award show.

But there were some folks on social media who really seemed to enjoy Maniscalco's opener, seeing it as a "hot take."

So far, Maniscalco hasn't received the best Twitter reviews as host of this year's VMAs. The comedian isn't very well-known by the MTV audience, but he is successful in comedy. He was named Comedian of the Year by Billboard in 2018. Maniscalco also made Forbes' list of the world’s highest-paid comedians in 2017 and 2018. His memoir, Stay Hungry, became a National Best-Seller right after it was released in 2018.

And already, many viewers tweeted who they hope to see as host one day, from Megan Thee Stallion and Jonathan Van Ness to Kelly Clarkson and Lizzo. Although this year's host is already chosen, perhaps there's a chance for one of those folks to take the mantle next year.

As the award show goes on, there haven't been any other jokes — or appearances — by Maniscalco so far, so hopefully that "triggered" joke can stay in the past, where Twitter users prefer it to be.