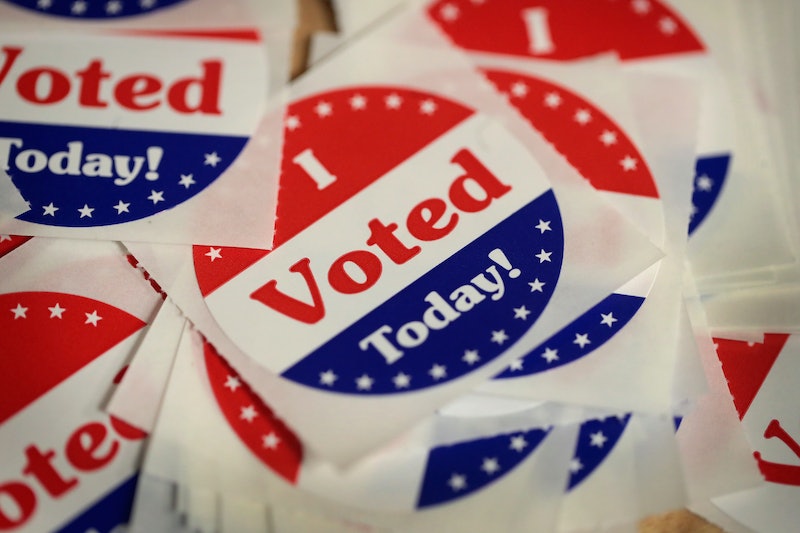 As the midterm elections approach, Donald Trump has sent a clear message that his administration will not tolerate voter fraud. Notably, though, the president has focused a good deal of attention on something that doesn't really seem to be a problem in the United States. In fact, voter fraud statistics suggest Trump's statements about it create a skewed perception of how much the issue actually affects American elections.

Over the past two years, Trump has repeatedly expressed concern about voter fraud — and recently promised to ensure that any offenders face severe penalties. For example, on Monday, the president tweeted:

Law Enforcement has been strongly notified to watch closely for any ILLEGAL VOTING which may take place in Tuesday’s Election (or Early Voting). Anyone caught will be subject to the Maximum Criminal Penalties allowed by law. Thank you!

Moreover, as the Washington Post reported on Nov. 5, while chatting with reporters on his way to a rally in Ohio, Trump again indicated that he believes voter fraud is pervasive and problematic. "There are a lot of people — a lot of people — my opinion, and based on proof — that try and get in illegally and actually vote illegally," he said. "So we just want to let them know that there will be prosecutions at the highest level.”

While the president seems convinced that voter fraud could potentially significantly impact Tuesday's midterms, research reveals that this is quite unlikely. The Brennan Center for Justice, a nonpartisan organization dedicated to protecting the rule of the law, reported in January 2017 that voter fraud is "vanishingly rare, and does not happen on a scale even close to that necessary to 'rig' an election." The organization also cited a host of studies and court rulings that had come to the same conclusion.

For example, the Center's own comprehensive study on the issue from 2007 found that most reported cases of voter fraud are not actually due to fraud, but, rather, result from things like clerical errors. Moreover, the study also found that, in the American elections it examined, voter fraud occurred at a rate between between 0.0003 percent and 0.0025 percent. As the Center described, these findings mean that an American is more likely to be struck by lighting than to misrepresent their identity at the ballot box.

Similarly, after analyzing the 2016 election, the Washington Post found that there were only four documented cases of voter fraud in the entire general election. As the paper described, that reflects 0.000002 percent of the ballots cast (if they were counted, which they weren't because they were fraudulent).

While Trump and his administration seem to be perpetuating a message that voter fraud is a significant problem in the United States, research suggests otherwise. It remains to be seen whether the president will continue to express concerns about potential fraud as the polls open on Tuesday.