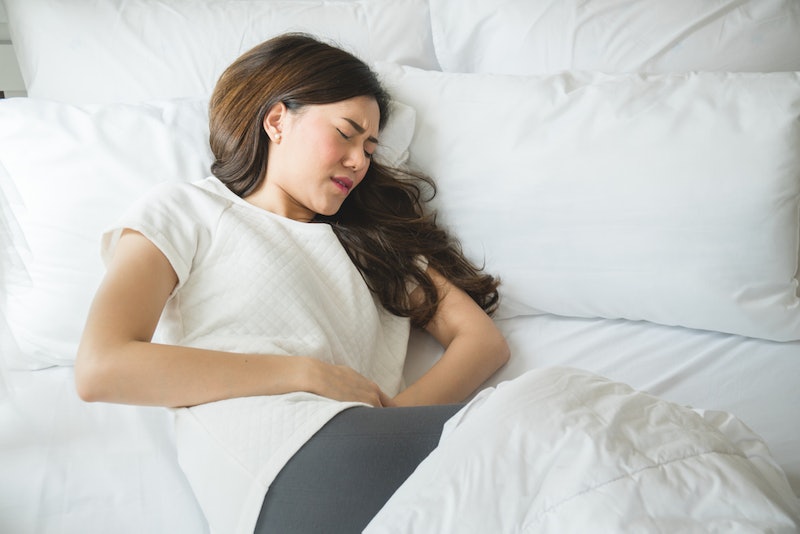 If you happen to experience pelvic pain, you're not alone. Vulvodynia, a syndrome that causes pain and discomfort around the vulva and vaginal areas, can be a frustrating diagnosis; doctors still don't know what's behind it in the majority of cases, and the National Vulvodynia Association explains that the name itself means "chronic vulvar pain without an identifiable cause." The pain can be localized or generalized, and might be triggered by everything from allergies and infections to past trauma. However, for the estimated 15 percent of women who'll experience unexplained chronic vulvar pain in their lives, there might now be an effective treatment — and it was originally designed to treat the chronic pain disorder fibromyalgia.

A new study from researchers at Rutgers, published in the American Journal of Obstetrics and Gynecology, examined whether fibromyalgia medication could help the sexual dysfunction of women who have vulvodynia. "Women with vulvodynia experience difficulties across all domains of sexual function (sexual arousal, orgasm, satisfaction, pain)," the study says. Gabapentin, the medication they studied, is an anti-seizure medication that can help with nerve pain in people with chronic pain issues, including fibromyalgia and shingles.

This was the first study to see if Gabapentin might be effective for painful sex related to vulvodynia, and it found that it did relieve symptoms, though not to the degree of people without the disorder. Out of a collection of 230 women, 89 were randomly assigned Gabapentin while the others were given a placebo. The ones on Gabapentin showed more sexual desire, arousal and satisfaction and less pain than the ones who just took placebos. The most improvement, the study said, was in women who had high levels of muscle pain, "which suggests that the effect of gabapentin may be on reducing muscle pain."

"Gabapentin be considered for treatment in women who have significant muscle tightness and spasm in the pelvic region,” lead study author Gloria Bachmann said in a press release.

Fibromyalgia, the chronic pain condition Gabapentin is formulated to treat, is vastly more common in women; between 80 and 90 percent of people with fibromyalgia are female, says Healthline. Lady Gaga is one of the most famous people who have it, and documented her struggles with it in documentary Five Foot Two.

Many women with fibromyalgia also have vulvodynia, explains Adrienne Dellwo for Verywell Health. "Researchers don't know exactly why vulvodynia is common in [fibromyalgia]," she writes. "However, a prominent theory is that they all share a common underlying mechanism — central sensitization. In central sensitization, the central nervous system (brain and spinal cord) become hypersensitive to unpleasant stimuli." It's possible that both fibromyalgia and vulvodynia have their roots in a seriously over-sensitized nervous system that sends constant pain signals.

A study in 2012 found that women with vulvodynia are more likely than other women to have other chronic pain conditions, but scientists are still attempting to understand why. However, the Gabapentin experiment shows a lot of promise. For one, it suggests a strong link between the causes of fibromyalgia and vulvodynia in women. For another, it offers hope for treatment.

There are limits to the potential application, however. The study didn't find that Gabapentin helped with orgasms or lubrication. The drug also didn't completely banish pain in the women who took it. It's a step forward, though. If you do experience vulvodynia, it's definitely worth discussing Gabapentin with your GP to see if it might help you out — particularly if you have other chronic pain conditions as well.

More like this
How To Protect Your Digital Privacy If You Need An Abortion Post Roe v. Wade
By Kaitlyn Wylde
I'm 42 & I've Never Had Sex. Is It Too Late?
By Sophia Benoit
5 Crystals For Anxiety
By Megan McCarty
5 Crystals To Manifest Better Sleep
By Megan McCarty
Get Even More From Bustle — Sign Up For The Newsletter