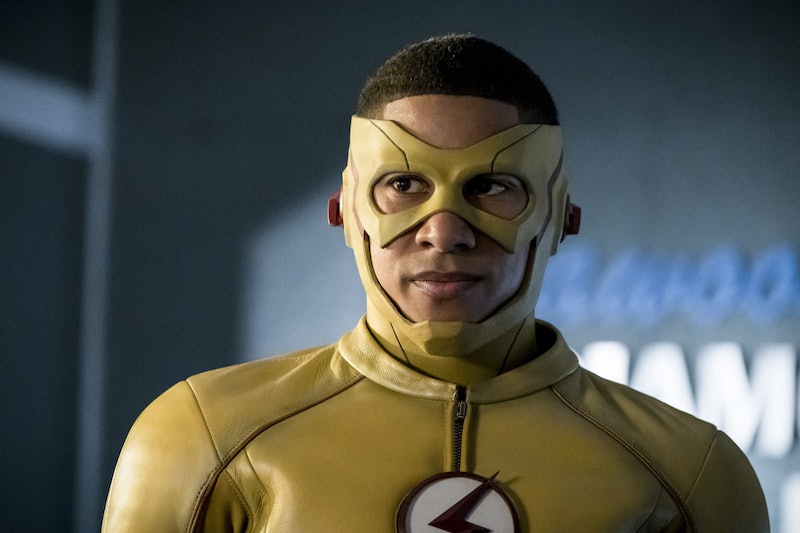 Things took a turn for the worst on The Flash's "The Wrath of Savitar," and Barry's chances of saving Iris from Savitar are only getting smaller. This week, Team Flash suffered a huge blow — and I mean huge — when Savitar successfully got into Wally's head and used him to escape from his future prison. After using Julian to communicate with Savitar, Barry figured out where his future self had imprisoned Savitar: inside the Speed Force. Unfortunately, Wally was already being manipulated by Savitar. He accidentally set Savitar free from the Speed Force by giving him the rest of the Philosopher's Stone and was forced to take Savitar's place in the Speed Force before Barry could stop him. Wally is stuck in the Speed Force on The Flash, and Savitar's prophecy is slowly coming true.

In The Flash's mid-season finale, Savitar predicted the fall of Team Flash, telling Barry, "One shall betray you. One shall fall. One will suffer a fate worse than death." In "The Wrath of Savitar," at least two thirds of that prophecy came true. First, Caitlin revealed herself as the one who betrayed them. It turns out, she kept a small piece of the Philosopher's Stone because she wanted to see if she could use it to get rid of her powers. It turns out that her betrayal was actually a good thing, as Savitar needed the entire stone to escape from his Speed Force prison, but Caitlin still betrayed the team by keeping it a secret.

But it's Wally's fate that really shocked fans. Wally suffered a fate worse than death in "The Wrath of Savitar" when he was sucked into the Speed Force. And it was all part of Savitar's master plan — remember, Savitar is the one who gave Wally his speed in the first place. He needed a speedster fast enough to take his place in the Speed Force and allow him to go free, and Wally played right into his hands. With Wally now stuck in the Speed Force, not only does it look like Savitar's prophecy is coming true, without Wally's speed, Barry doesn't have a plan to save Iris from Savitar.

Let's hope Barry finds a way to get Wally out of the Speed Force before Savitar strikes again.