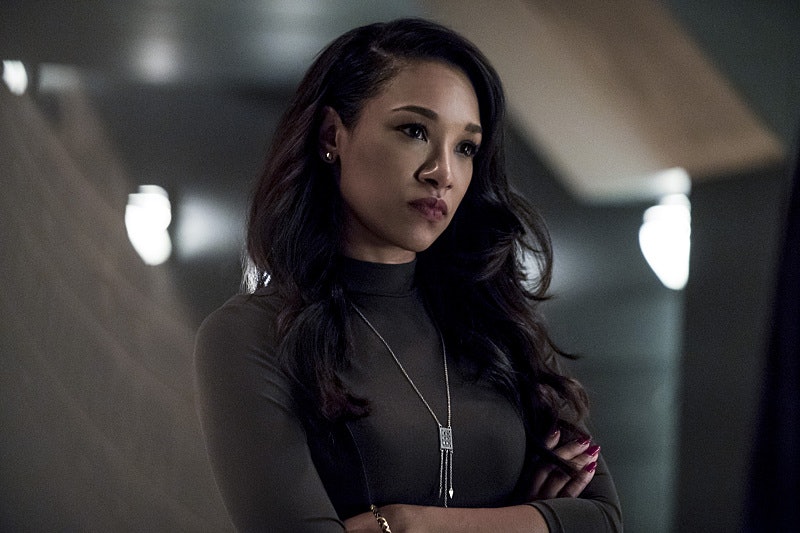 A death is coming to Team Flash. At least, that's what Savitar told Barry and the team on The Flash's mid-season finale, "The Present." Caught by Barry, with a little help from Jay Garrick and Kid Flash, Savitar delivered an ominous prophecy. In a room full of Team Flash — Cisco, Iris, Caitlin, Wally, Joe, HR, and Jay — Savitar promised that one of them would die in the future. And, when Barry accidentally traveled to the future while trying to defeat Savitar, he saw Savitar kill Iris in front of a future him. So, is Iris going to die on The Flash ? Let's hope not.

Before we get into Iris' odds of surviving the season, let's back up a bit. After teaming up with Jay to capture Alchemy and Savitar, Barry was able to talk to the God of Motion without actually facing him physically. In their conversation, Savitar revealed that he has come to take back what Barry took from him — the two are supposedly enemies in the future, and Savitar has come back in time for revenge (not unlike Reverse Flash). But Savitar didn't just monologue about his evil plan: he delivered a prophecy. Speaking to Barry about Team Flash, Savitar said this: "One shall betray you. One shall fall. One will suffer fate far worse than death."

After Savitar delivered his creepy prophecy, Barry and Jay decided to send the Philosopher's Stone into the Speed Force, hoping it would make Savitar lost to the world forever. But, in doing so, Barry was propelled five months into the future, where he saw Savitar kill Iris. Now, Barry might have seen Savitar kill Iris in the future, but, as Jay later told him, the future is never set in stone. What he saw could be one of thousands of possible futures — it doesn't mean that Savitar is right. (It should also be noted that the possibility of Iris dying means that Barry and Jay did not defeat Savitar by sending the Philosopher's Stone into the Speed Force.) Barry seems to want to believe Jay. He doesn't tell Iris about her possible death — in fact, he asks her to move in with him as a Christmas present.

I, for one, am hopeful that Iris doesn't die like in Barry's future. (She deserves better than to be stuffed in a fridge.) But even with Iris alive, if any part of Savitar's prophecy does come true, Team Flash will never be the same.