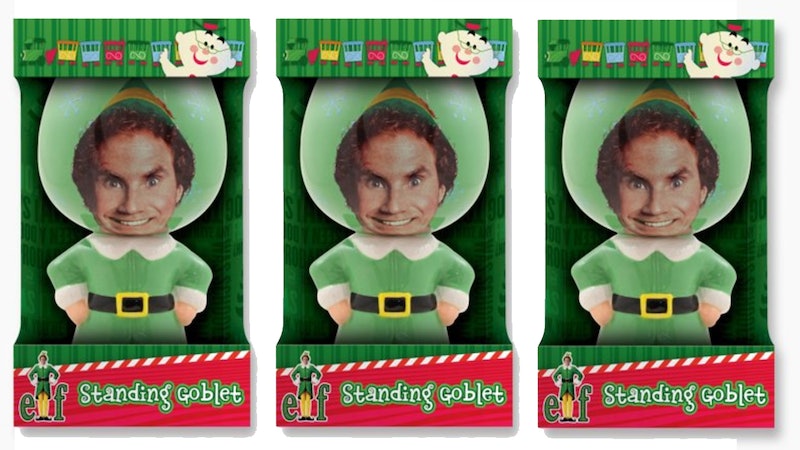 Where were you when you realized you could be drinking every beverage, all day long, out of this Buddy the Elf standing goblet? Was it right here, right now? Don’t be ashamed. We all learn eventually, and today is your day. Let us rejoice, be glad, and bask in the glory of only ever drinking from a Buddy the Elf goblet!

But wait! How does one procure such a goblet? Was it only available as a limited-edition Elf DVD add on? Will you need to rifle through the glassware section at your local thrift shop? Must you make a deal with a Santa Claus? No, my gobletless friend. You just need to look on Walmart.com.

For $22.99, you can be the proud owner of a Buddy the Elf Standing Goblet. The goblet—and yes, “goblet” is the correct word for this drinkware—is a bright, almost arresting, green. The bowl features Buddy the Elf’s classic phrase “I’m a cotton-headed ninny-muggins” on one side. On the other is a photo Will Ferrell’s face in character as Buddy the Elf. The photo is oddly proportioned and Ferrell’s expression is admittedly terrifying.

You may have noticed this product is called a “standing” goblet. That’s likely because the lower half of the goblet is not a stem, but Buddy the Elf’s lower half. That’s right, you hold onto Buddy’s legs and torso and sip out of his brain. ‘Tis the season, y’all.

Currently, there are only four Buddy the Elf goblets left on Walmart.com, but fear not! The internet is vast and full of other places to buy Buddy the Elf goblets. You can get on for $29.09 on MyPartyShirt.com, the site responsible for the goblet. However, MyPartyShirt currently only has two left in stock. Amazon also has some available at a significantly lower price: $12.75 plus shipping. It doesn’t appear their goblets are in limited supply.

At 1.5 Pounds, the standing goblet isn’t a subtle piece to add to your collection. It’s the kind of goblet that would make your other cups come to life, Beauty and the Beast-style, just so they could inch away from it. This Buddy the Elf goblet is kind of a monstrosity, and I love it.

In addition to being a brilliant white elephant gift, there are many occasions and situations which require a Buddy the Elf goblet. They include, but are not limited to:

If you really want to go all out putting your Buddy the Elf love on display, you could head to Chicago. That’s where one restaurant is recreating the spaghetti from Elf. Miss Ricky’s, the restaurant inside Virgin Hotels Chicago, is offering the Spaghetti Sundae for a limited time in honor of the film’s 15th anniversary. For $15, you can indulge on spaghetti topped with a combination of fruity sauces, crushed candies and cookies, various chocolate topping, and syrup. Chef Moosah Reaume, who created the dish, called the Spaghetti Sundae “the biggest sugar bomb of your life.”

You could also try to recreate the Elf spaghetti on your own if you won't be able to make it to Chicago before Christmas. Although, after eating that, you’ll probably need to fill your Buddy the Elf goblet with Pepto Bismol.