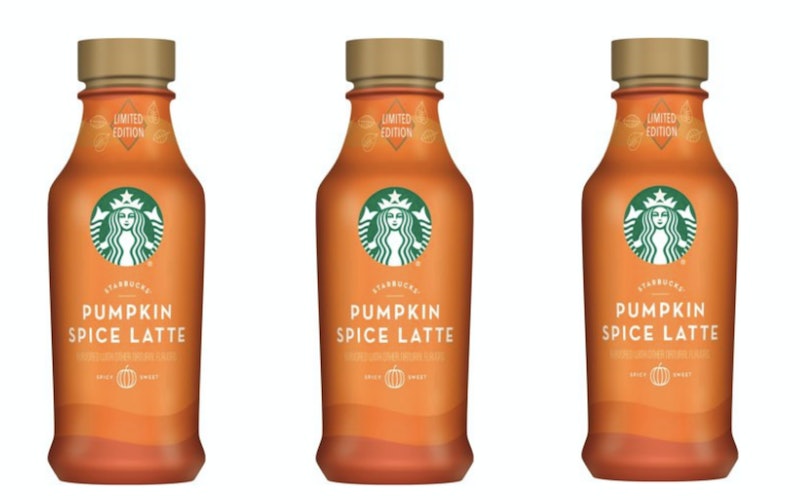 With fall formally underway since the equinox has passed, pumpkin products are aplenty. But none compare to the most legendary fall beverage: the Pumpkin Spice Latte. The cult favorite has become Starbucks' most iconic drink. The Pumpkin Spice Latte (or PSL) is no longer just an autumnal sip; the PSL is a lifestyle. The only downside of the drink is its restrictive availability. While the latte will be available in most stores through the Thanksgiving holiday, it's not always easy to get to a Starbucks location. Luckily, now you can now get your fix by purchasing a 40-ounce Pumpkin Spice Latte bottle at Walmart.

Delish reports for a limited time — presumably the fall season — Walmart super center locations are selling the massive 40-ounce bottled Pumpkin Spice Lattes for less than the cost of most Venti-sized lattes (which are 32 ounces). Spotted at a Washington state Walmart for just $4.53 (keep in mind prices may vary store to store), the chilled espresso bottles contain around FIVE servings of coffee. Talk about a bang for your buck.

As for the actual PSL on the Starbucks in-store menu, the window in which you can ~actually~ order one of these scrumptious, autumnal sips in the store is a bit unclear. You can definitely snag one now through Halloween. The official Pumpkin Spice Latte Twitter stopped being active on Halloween last year, so that may technically be when pumpkin season turns to peppermint season in the eyes of Starbucks. Those who have worked in retail or fast food service know that things like PSL syrup aren't truly gone until there is no more stock. So, theoretically you could snag a PSL until next year; don't count on that though.

In the 15 years since its debut in 2003, the evolution of the PSL from drink to icon has been legendary and unprecedented. The exploding popularity of Instagram and Twitter led to the development of the PSL hashtag (and the use of the abbreviation, in general), the official Twitter account, and even its own Instagram. The Pumpkin Spice Latte even contributed the creation of this year's Leaf Rakers Society, a Facebook group devoted to all things fall (and the PSL itself, naturally).

PSL haters have often resorted to the argument that Pumpkin Spice Lattes don't even contain real pumpkin. While that was once the case, the PSL has in fact contained real pumpkin since 2015, during which time caramel color was also removed. Whether or not the massive PSLs Walmart carries contain real pumpkin is a little unclear. The 14-ounce version only lists seven ingredients on its label, with one being "natural flavors." It would stand to reason pumpkin is one of these, though.

In addition to massive bottles of PSL, Walmart also carries a number of other seasonal Starbucks goodies including pumpkin spice ground coffee, pumpkin spice K cups, and Pumpkin Spice Cookie Straws — so if you're worried you're going to miss Peak Pumpkin Season, get yourself over there, and make sure to stock up on the 40-ounce bottle while you're at it.