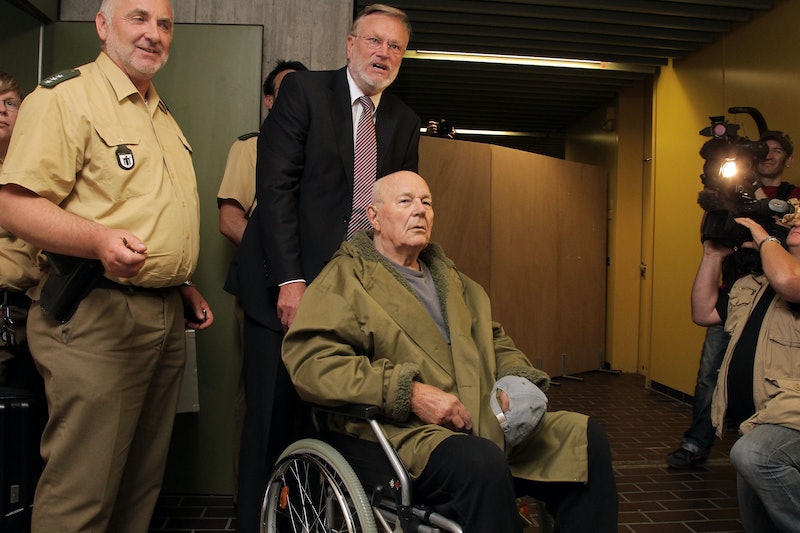 Netflix's new docuseries, The Devil Next Door, examines whether a retired Ukrainian-American auto-worker named John Demjanjuk was Ivan the Terrible, a notoriously cruel Nazi guard at the Treblinka concentration camp during World War II. The question, at surface level, is simple: he either was or was not the same man. But the answer is so complicated, it takes five hours of television to answer.

As reported by the New York Times, Demjanjuk was born in the Ukraine in 1920 and captured by the Germans in 1942 — a year after being drafted into the Soviet Army. What he did during the rest of the war is the core issue of Devil Next Door.

As the Times continues, Demjanjuk married his wife, Vera Bulochnik, in 1950 after meeting her at a German displaced persons camp. There, they had their first child. They emigrated to the U.S. in 1952 and settled in Ohio, where they had two more children. However, their lives was upturned in 1977 when Holocaust survivors began identifying Demjanjuk as Ivan, which he firmly denied. Eventually, his citizenship was revoked, and he extradited to Israel to stand trial.

During the case, conflicting evidence was presented. The prosecution centered their argument around an SS identification card from the Trawniki Nazi training camp, which they claimed was Demjanjuk's, per the Times. But the defense contended that it was a forged document. A key witness, Holocaust survivor Eliahu Rosenberg, also identified Demjanjuk as Ivan, but it was later revealed that he'd previously testified Ivan was killed in a prisoner uprising during the war. Furthermore, it was brought to light that Demjanjuk's birth name was Ivan, and he had only changed it to John when he came to the U.S.

Demjanjuk maintained his innocence throughout the trial, claiming it was a case of mistaken identity. According to the Associated Press, his defense lawyer Yoram Sheftel argued that Ivan the Terrible was actually a man named Ivan Marchenko, who Ukrainian guards at Treblinka said looked much different than Demjanjuk. Though, as the prosecution pointed out, Demjanjuk gave his mother's maiden name as Marchenko in a 1948 U.S. visa application.

Ultimately, Demjanjuk was convicted and sentenced to death in April 1988. But that was not the end of his legal battles: in 1993, his conviction was overturned by the Israeli Supreme Court due to reasonable doubt. Demjanjuk returned to the U.S. for a time, but was again extradited in 2009, this time to Munich, Germany to stand trial for war crimes unrelated to Ivan the Terrible. Finally, in 2011, Demjanjuk was convicted on 28,060 counts of accessory to murder, which is how many people are believed to have been killed during his alleged service at the Sobibor camp in Nazi-occupied Poland. He was sentenced to five years in prison, but died in 2012 as a free man while seeking an appeal.

To this day, Demjanjuk's family continues to defend his innocence.

More like this
The Dog & His Handler In 'Gunther’s Millions' Are Worth, Well, Millions
By Gretchen Smail
'That '90s Show' Is Officially Coming Back For Season 2
By Gretchen Smail and Grace Wehniainen
The 'Freeridge' Cast Shared Their Hopes For A Potential Season 2
By Grace Wehniainen
You Might Want To Rewatch This Key 'On My Block' Scene To Understand 'Freeridge'
By Grace Wehniainen
Get Even More From Bustle — Sign Up For The Newsletter
From hair trends to relationship advice, our daily newsletter has everything you need to sound like a person who’s on TikTok, even if you aren’t.