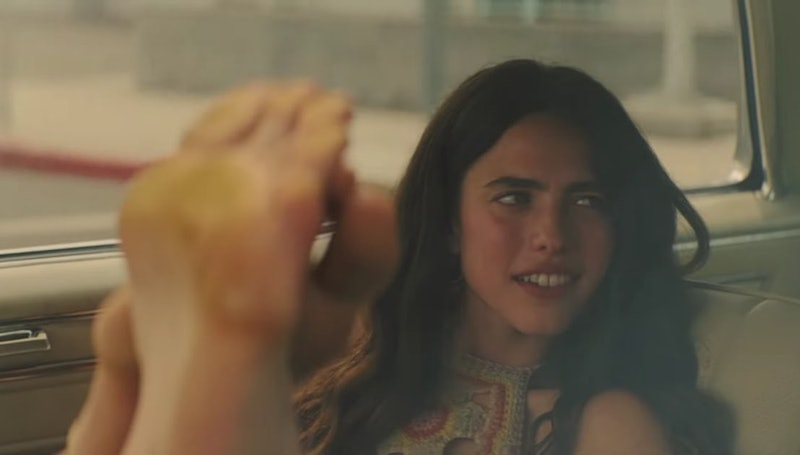 Quentin Tarantino's latest movie, Once Upon a Time in Hollywood, opening July 26, is a film that mixes history and fiction. Taking place in 1960s Los Angeles, it centers around actor Rick Dalton (Leonardo DiCaprio) and stuntman Cliff Booth (Brad Pitt). But the film also includes other actors playing real-life people, such as Margot Robbie, who portrays Sharon Tate, an actor married to Roman Polanski, who was murdered by the Manson family in 1969, and Damon Herriman as Charles Manson himself. With that in mind, it may be difficult to keep track of which Once Upon a Time in Hollywood characters are totally made up and which aren't. Margaret Qualley's character Pussycat, for example, is a bit of a mystery. It seems that she's not totally fictional, but not 100% based on a specific real person either.

In Once Upon a Time in Hollywood, it's Pussycat who lures Booth and Dalton out to the Manson compound on Spahn Ranch, possibly to recruit them to the family. Manson famously took in vulnerable young women looking for community and meaning in their lives, so you may wonder as you watch the film whether Pussycat really did live on the ranch. Her name alone is a big hint; Pussycat is possibly a stand-in for "Kitty Kat," the nickname of real Manson family member Kathryn Lutesinger. According to Manson: The Life and Times of Charles Manson by Jeff Guinn, Lutesinger's boyfriend, Bobby Beausoleil, was the one who brought her into the Manson fold. As a transient member of the cult, Lutesinger didn't always get along with Manson, claims the historical blog All That's Interesting. At one point, the site claims, she fell asleep during one of his speeches and woke up to him punching her in the face.

Lutesinger was five months pregnant when Beausoleil was arrested for the murder of musician Gary Hinman. Pregnant and terrified after his arrest, Lutesinger and another member fled the ranch. When the Hinman investigators realized who she was, they questioned her about what she knew about Hinman's murder and Manson's cult.

According to Helter Skelter: The True Story of the Manson Murders by Vincent Bugliosi and Curt Gentry, Lutesinger told them that another Manson family member, Susan Atkins, had gone with Beausoleil to Hinman's home to collect money and that she had later bragged about stabbing a man in the legs.

But Hinman wasn't stabbed in the legs. What Atkins was actually referencing was the death of screenwriter Wojciech Frykowski, who was killed along with Sharon Tate. Lutesinger's info may have actually helped police solve Tate's murder. "That scared, pregnant 17-year-old helped bring down one of the most infamous cult leaders in history," All That's Interesting writes.

Once Upon a Time in Hollywood, however, doesn't exactly follow the course of history, but to reveal too much would give away Tarantino's stylized adaptation of the events. Qualley has said, though, that researching the Manson family history did indeed give her "terrifying nightmares." She told Paper Magazine that Tarantino gave her documentaries to watch about the murderous cult, and she would listen to Manson's favorite psychedelic music. That said, Qualley did enjoy making the film, and "had some good experiences."

Once Upon a Time in Hollywood includes fictionalized versions of real people, but the twists Tarantino adds to the story are what make this film more than a biopic or historical narrative. Though she's probably based on Kitty Lutesinger to some degree, Pussycat's relative anonymity only adds to the film's '60s trippy ambiance.