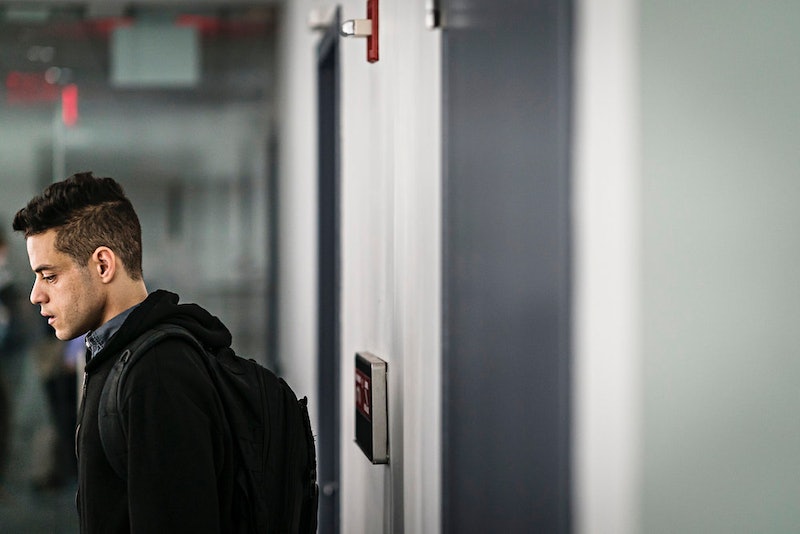 Mr. Robot's most shocking episode yet, "eps3.4_runtime-err0r.r00," is also its most technically impressive. While the attack on E Corp will make for a riveting, explosive hour, the most impressive element is that the Nov. 8 Mr. Robot episode appears to have been filmed in a single shot. The episode trades off perspectives between Elliot and Angela as protesters storm the E Corp tower. The action moves from the entrance to the upper floors with seemingly no edits. While it looks like this Mr. Robot episode was really shot all in one take, it's actually the result of some sneaky editing techniques.

Mr. Robot has always been willing to experiment with its structure, whether that's dedicating long stretches of time to Elliot's fever dreams or turning into a TGIF-style sitcom for half an episode. The show has employed extended one-take shots before, including the post-credits scene from Season 1 with Whiterose and Phillip Price having a meeting amongst the one-percent, or the Season 2 still-shot of the Dark Army's drive-by shooting aimed at Dom and Darlene. While the show has flirted with long-takes before, nothing in Mr. Robot or television history can match the ambition of "runtime-error," which takes the show's love of one-take shots to an ambitious zenith.

The long-take shot, often called a "oner", has become something of a popular spectacle in the past decade. Long takes have been around since the beginning of film, but in the past few years, complicated long takes in film and television have been gaining attention. The gold standard of the television "oner" is the six-minute sequence that closes out Episode 4 of True Detective. It's a violent, tense journey through the Louisiana projects, and there is not a single edit in the entire scene.

However, MTV News reported that despite the final shot being one take, the filmmakers behind the episode had a back-up plan. "The director built in possible edit points if two takes had to be combined to make the perfect version of the shot," Kevin P. Sullivan wrote, "but ... the sequence everyone saw in the episode is, in fact, a true single take." These "edit points" are what make extra-long one-takes like the Mr. Robot episode achievable.

Possibly the defining example of using editing to achieve the appearance of a continuous shot is the Oscar-winning film Birdman, which appears to consist of one shot spanning multiple locations over the course of nearly two hours. However, in reality, the filmmakers choreographed moments that would allow them to splice in an edit without the audience noticing.

In an interview with Variety, Birdman colorist Steve Scott said: "Where are those moments when you would never notice a cut? Well, in the pan [quick, sideways motion of the camera]. So let's go into the middle of the pan and cut there." If you watch Birdman and notice that the camera lingers on a door or a musician for seemingly no reason, it's likely that it was used to disguise an edit.

In an interview with Salon, Mr. Robot creator and director Sam Esmail admitted that while the "eps3.4_runtime-err0r.r00" episode is meant to look as though it was one-shot, it is actually "the product of smoothly joining 30 tracking shots filmed at several locations over the equivalent of nine days." This ambitious Mr. Robot episode skews more towards Birdman than True Detective when is comes to the filmmaking approach.

Despite the editing needed to make it happen, the episode is still an impressive technical achievement, and it's no wonder that USA is making the bold move of presenting the episode entirely commercial-free. This episode of Mr. Robot is setting the bar for one-take television higher than ever before.