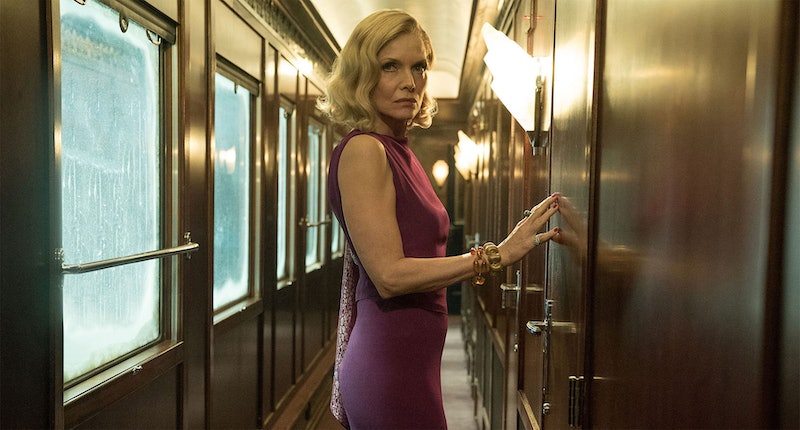 Edward Ratchett (Johnny Depp) is found dead in his train compartment on the Orient Express; a dozen, seemingly unconnected suspects deny any involvement, and Belgian private inspector Hercule Poirot (Kenneth Branagh) is desperate to solve the case. This is the set up for the newest big screen adaptation of Agatha Christie's classic novel Murder on the Orient Express, in theaters Nov. 10. In the movie, as with the book, Poirot discovers that the secret to solving the case actually lies in another murder: the famous Armstrong case. Christie's novel might be fiction, but the details of the Armstrong case are real, despite it being a fake name for an actual true crime event.

In the world of Murder on the Orient Express, the Armstrong case was a highly publicized murder involving the death of 3-year-old Daisy Armstrong, the daughter of a wealthy American family. Through a wild series of events, including ransom money and false accusations, Daisy's death led to the death of both of her parents and her nanny. And still, the culprit, gangster Lanfranco Cassetti, went free on a technicality. If the details of the Armstrong case sound familiar, it's because Christie based the story on one of the most notorious crimes of the 20th century: the kidnapping of the Lindbergh baby.

In 1932, aviator Charles Lindbergh's baby son, Charles Lindbergh Jr., was reported missing from the family's New Jersey home. Lindbergh, of course, was a famous American pilot known for flying from New York to Paris, and the story of his missing child made headlines worldwide. In 1932 and 1933, the Lindbergh case dominated the news cycle, thus providing ample inspiration for Christie. And the unsolved crime became the perfect case for the author's fictional detective Hercule Poirot, who had already appeared in two of her novels.

The case was still unsolved when Murder on the Orient Express was published in 1934. Despite the many mysteries surrounding the case of the Lindbergh baby at the time of the book's release, what details were known match up perfectly with the Armstrong case. For example, in both cases, the kidnapper asked for ransom money — $50,000 in the case of the Lindbergh baby, which was paid — but the child was never returned. Police in both cases falsely accused a nanny of being in on the plot, causing the nanny to commit suicide. And, finally, in both cases, the missing child was tragically found dead.

At the time of publication, Murder on the Orient Express provided fictional answers to a case still very much a mystery. In the book, the Armstrong case, though tragic, has been solved and (unorthodox) justice has been served. In real life, Murder on the Orient Express was released to an audience of readers still craving answers, which might help explain its instant success. Soon after the book's release, Bruno Hauptmann was found guilty of the Lindbergh kidnapping and was sentenced to death in 1935, not unlike the resolution of the Armstrong case in the book.

The case of the missing Lindbergh baby was not the only real event that inspired Christie's book. One of the twists in the story occurs when intense snowfall causes the train to stop, leaving passengers stranded while Poirot continues his investigation. According to Christie's official website, this was inspired by a 1929 blizzard in Turkey that caused the real Orient Express to stop in its tracks for six days. Christie herself traveled on the Orient Express multiple times, and once even found herself on train stopped for one full day due to weather conditions, an experience that also influenced Murder on the Orient Express.

The mystery and setting for the new movie might feel larger than life, but the true nature of the Armstrong case proves that sometimes the truth really is stranger than fiction.