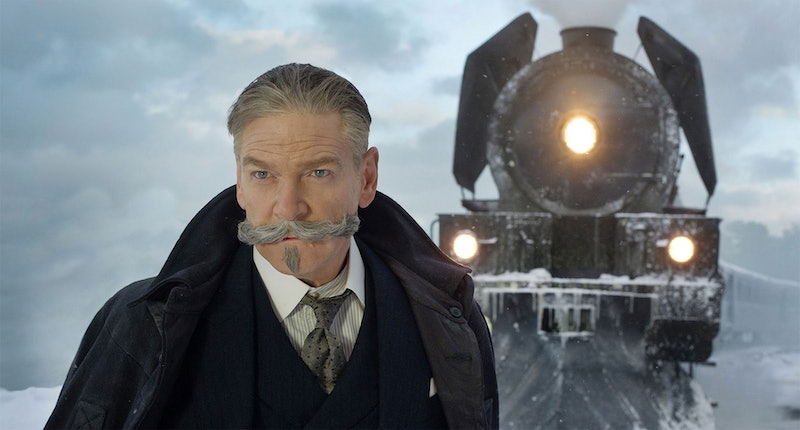 One of the most hotly anticipated films still to come in 2017 is Murder on the Orient Express. The whodunnit period piece boasts an intriguing murder mystery, stellar costuming, gorgeous imagery, and an abundance of big stars, including Daisy Ridley, Johnny Depp, Judi Dench, Michelle Pfeiffer, Penelope Cruz, and director Kenneth Branagh. But where did the story originate? Is Murder on the Orient Express a true story, or does it come from some other source?

It's actually not a true story. The film is instead based on a rather famous novel by author Agatha Christie. The book Murder on the Orient Express was published in 1934, and was Christie's tenth work featuring her most enduring protagonist, detective Hercule Poirot, following seven other novels, a short story collection, and the 1930 stage play Black Coffee. Poirot would go on to feature in dozens of works by the author over her decades-long career. Save for Sherlock Holmes, he is probably the most famous detective to come from literature, and Murder on the Orient Express is arguably Christie's most recognized work featuring the Belgian sleuth with the killer mustache. And since it is such a famous book, it's not surprising that the 2017 film is not the first screen adaptation of the book — not by a long shot.

The book was first adapted to the big screen in 1974 in a film called, you guessed it, Murder on the Orient Express. That version stars Albert Finney as Poirot (Branagh stars as the detective in the new version) and also features big stars of the day like Sean Connery, Lauren Bacall, Ingrid Bergman, Vanessa Redgrave, Jacqueline Bisset, and Michael York. It was both a critical and commercial success, and seemed to keep audiences satisfied for at least 27 years, when a TV movie adaptation was produced.

The 2001 version is considerably less star-studded than its predecessor or successor given its smaller made for television budget, and also features fewer characters and takes place in the modern day. Alfred Molina stars as Poirot, while Meredith Baxter, Leslie Caron, and Peter Strauss play supporting roles. Another TV adaptation occurred in 2010 as an episode of the series Agatha Christie's Poirot, with David Suchet as Poirot, and featuring Jessica Chastain, Barbara Hershey, and Toby Jones. Through all of these adaptations, it's been established that Murder on the Orient Express is a fictional work, but Christie was at least partly inspired by true events while writing the novel.

For one, the Orient Express was a real passenger rail line that ran between Paris and Istanbul beginning in the late 1800s. Christie herself rode the train in 1928, and made note of its layout to include in the novel, according to agathachristie.com. The late author's website also states that a 1929 incident where the train was stalled for six days by a blizzard, along with a separate lengthy rain delay which occurred while Christie herself was on board, inspired the plot of the train being stuck in the snow while Poirot attempts to solve the story's titular murder.

But perhaps the most notorious real life inspiration for the story came from the infamous Lindberg kidnapping. In 1932, internationally renowned aviator Charles Lindberg's infant son was kidnapped and held for ransom, only to later be found dead. The case was one of the biggest news stories of the early 20th century, and served as Christie's inspiration for the eerily similar "Armstrong baby kidnapping" of the novel — a crucial clue in Poirot's case — according to the Mirror.

Murder on the Orient Express is based on a famous Christie novel rather than a true story, but even though the story is a work of fiction, some of its details were still ripped from the headlines of its day, which explains why it feels so real.