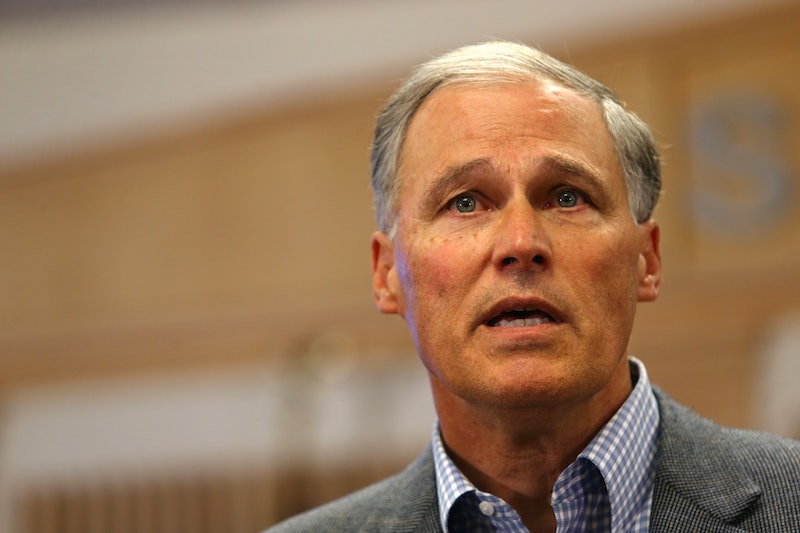 President Trump presided over an annual governors' meeting on Monday, and there he met with something he didn't exactly look prepared for: a Democratic governor directly confronting him over an idea he had put forward. Specifically, Washington Gov. Jay Inslee deconstructed Trump's gun control approach piece by piece, and Trump did not look comfortable hearing it.

Inslee took issue with Trump's proposal to arm teachers in order to protect schools, which the president specified at the meeting would only put guns in the hands of approximately 20 percent of teachers.

"Whatever percentage it is, speaking as a grandfather, speaking as the governor of the state of Washington, I have listened to the people who would be affected by that," Inslee said, beginning his rebuttal to the idea:

Inslee finished his point with a slightly more personal comment on the way this president chooses to publicly discuss policy.

I just suggest we need a little less tweeting here and a little more listening. So let's just take [arming teachers] off the table and move forward.

The president, however, didn't seem to enjoy hearing a direct disagreement with an idea that he had been pushing. Trump glared at Inslee with pursed lips and crossed arms for the entire time that the governor was talking. When Inslee finished, Trump responded by saying that a number of states already did have armed teachers and then quickly handed over the floor to someone who shares his ideological viewpoint more closely, Texas Gov. Greg Abbott.

Several national media outlets immediately picked up on the exchange, though, commenting both on Inslee's comments and Trump's closed-off body language. There had already been whispers that Inslee could be a potential Democratic presidential candidate in 2020, and this has now certainly given him a boost in that regard.

Inslee was not the only governor to outwardly disagree with Trump's proposal to arm certain teachers — even some Republican governors stated their disagreement — but Inslee presented his position the most forcefully, and he was one of only two Democratic governors to speak at the meeting.

Inslee, a progressive from a particularly progressive state, isn't new to the fight to curb gun violence. He served in the U.S. House of Representatives from 1992 to 1994, and reportedly lost his re-election bid because he voted for the Federal Assault Weapons Ban — which, incidentally, would have taken guns like the AR-15 used in the Florida shooting off the market.

He's expressed support for a bill currently making its way through Washington's legislature that would ban bump stocks. It recently passed the state House, and now the Senate will discuss it before Inslee could potentially sign it into law.

The Seattle Times reports that Inslee used the national spotlight he'd recieved to help his own campaign.

"I told the president about the people I've been talking to. I told him I hope he'd start listening to them, too. But in the meantime, I'm going to confront him with everything I've got," he wrote in a campaign email sent out on Monday.