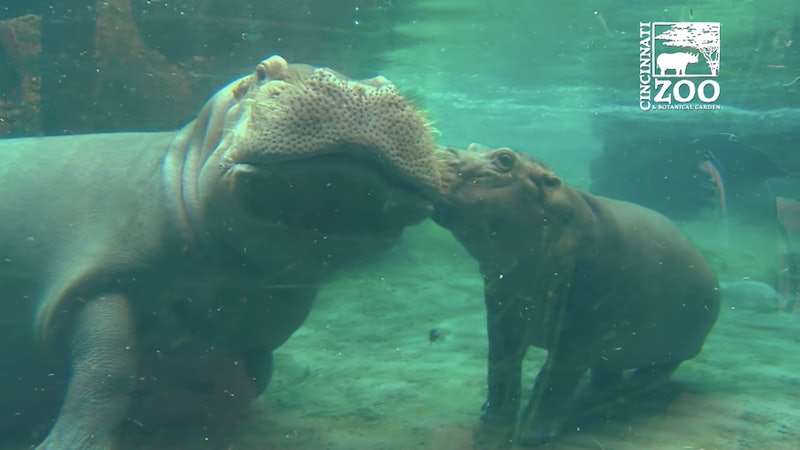 If you haven’t heard of Fiona the Hippo by now, don’t be too hard on yourself, but that needs to change immediately. Not only have videos of Fiona been viewed more than 100,000 times on the Cincinnati Zoo’s Facebook page, Fiona just got her own show on Facebook’s new platform for original video shows, Facebook Watch. Oh, and there’s an illustrated children’s book about Fiona in the works as well. The book will be written by the Cincinnati Zoo's director, Thane Maynard, and will be titled Saving Fiona: Science, Social Media, and the Story of a Baby Hippo. But you came here because we promised a video of precious Fiona passing gas, and on that promise we will deliver.

On Sept. 21, the Cincinnati Zoo (Fiona's home) posted a video to Twitter of everyone's favorite baby hippo, well, farting. It might not be cute when your boyfriend does it, but it sure is cute when Fiona does because she is the only pure and good thing left in this world. (Especially because it's oh-so-delicately expressed in the form of bubbles underwater, and how could anyone hate on that?) In the world's most perfect eight-second clip, young Fiona moseys around underwater, and then does the deed without thought or hesitation — because Fiona, if nothing else, does as she pleases.

So how did one little baby hippo become so famous that even her farts get attention? It all started when Fiona’s parents, Bibi and Henry, decided to make a little hippo baby. About six months after that, Fiona was born six weeks premature, and had to receive care around the clock to survive. Now, Fiona weighs a healthy 400+ pounds and draws crowds that could rival most human celebrities. In fact, the Cincinnati Zoo’s communications director, Michelle Curley, told Entertainment Weekly that she’s never seen one of their animals attract this level of admiration before. “I’ve never seen anything like it. People have Fionamania,” Curley said.

In some corners of the internet, Fiona is more than just a miracle baby — she’s also become an icon of body positivity. When the Cincinnati Zoo posted an image of the growing hippo’s neck rolls on Twitter last month, many of the hippo’s fans praised the Cincinnati Zoo for being one of the few places to actually celebrate gaining weight while female. As Twitter user, Taylor Welch, put it: “Honestly, I would trade opposable thumbs in order to be Fiona the Hippo and get congratulated on how much my neck rolls have grown.” And in the words of Twitter user @abxlangel, “Can society be more like this zoo please and appreciate women's bodies in every shape or form!!!!”

As adorable and inspiring as all of this is, the animal welfare activist in me can't get over how both American culture can rally behind one hippo family without addressing the fact that 95 percent of Africa's hippo population has disappeared entirely. Although the hippo is native to 29 African countries, most of the Earth's remaining hippos have to be confined to protected areas in order to survive. Hundreds of hippos are shot annually in the name of protecting humans. And despite their vulnerable conservation status, hippos are still killed for their meat, fat, and ivory tusks.

If you love Fiona the hippo as much as the rest of the internet does, that's awesome. I'm right there with you! But none of this changes the fact that hippos are very close to becoming extinct, and we all have a part to play in preventing that. So the next time you watch a video of Fiona farting under water or playing with her mom, consider looking into what you can do to help keep hippos alive. Because as Fiona has shown us, hippos really do make the world a nicer place to live.