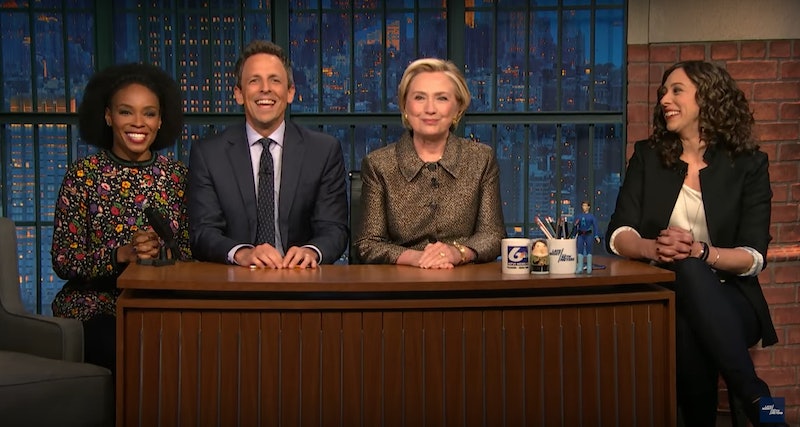 Despite her shocking defeat in the presidential election one year ago, former candidate Hillary Clinton still has a sense of humor — especially when it comes to her failed campaign and the "fair share of Chardonnay" she indulged in afterward. In a surprise appearance, Clinton showed up on Late Night with Seth Meyers on Thursday night to help with the "Jokes Seth Can't Tell" segment. After writers Amber Ruffin and Jenny Hagel provided Meyers with the punchlines to his first few jokes, they brought on their special guest to tackle the next specific jokes.

Meyers started off with this breaking news: "According to a recent article, chardonnay is making a comeback." "And they said I wouldn't be able to create jobs," Clinton responded with a satisfying nod. Next the Late Night host dove into, "The retractible roof on Atlanta's NFL stadium is not working properly." "Oh, well at least that ceiling's broken," Clinton quipped to audience hoots. It was also a sore reminder that one year ago, the United States came the closest it ever has to electing its first female president — a glass ceiling that remained in tact after Trump's upset win. Until next election, or the one after then, it seems.

With Clinton on a roll, Meyers gave her one last go: "According to a recent report, koalas may be extinct by the year 2040." "And according to Fox News, that's my fault," Clinton tacked on as the punchline. As the approval rating for President Trump plummets to below 38 percent, some Trump supporters are still looking for ways to shift blame and negative attention to Clinton. Even with the election one year in the past, today the former Secretary of State is still making the rounds on conservative and fake news outlets.

While commentators have cited the distribution of fake news and the alleged Russia collusion as possible contributing factors to Trump's win in the 2016 election, Clinton also took responsibility for the loss while Senate Minority Leader Charles Schumer (D-NY) blamed Democrats as a party whole. Although Clinton won the popular vote, she ultimately ceded a shot at the presidency after losing crucial swing states in the electoral college.

After her painful and unexpected defeat, Clinton famously took some time to reflect and recover in the woods. Clinton also relied on prayer, yoga, and Chardonnay among other things before venturing back out in the public. Since then she has taken the loss in stride, releasing a book titled What Happened and appearing on late night shows from Steven Colbert to Jimmy Fallon. Upon the one year anniversary of Trump's election, the hashtag #ThankYouHillary started trending.

Some people have cited Clinton's political ambition and Trump's alarming presidency as motivation for more women to run for office. The 2017 election saw many first-time winners break barriers in their respective races, from women to people of color to LGBTQ candidates.

After the "Jokes Seth Can't Tell" segment, Clinton stayed on to chat with the late night host. She and Meyers haven't always agreed on political topics. In her book What Happened, Clinton laid some of her election loss blame on Bernie Sanders, her Democratic primary opponent. Sanders' attacks on her paved the way for the "Crooked Hillary" smear campaign, she argued. Meyers was much more skeptical, however, and addressed the argument on his show in September:

Hillary Clinton, don’t blame Bernie because Donald Trump called you names. I promise you he was going to do that anyway. It’s not like Trump watched Bernie at the debates and thought, "Criticizing Hillary? That just might work!" And hey. You think Trump needed Bernie’s permission to be an asshole? Assholes don’t need permission. That’s what makes them assholes.

Meyers appealed for Clinton to instead blame the Electoral College, noting, "We shouldn’t be running the most important elections on Earth on a system designed over 200 years ago to appease slave owners. If 'American Idol' ran their voting like this, we’d all have a Sanjaya CD in our cars.”