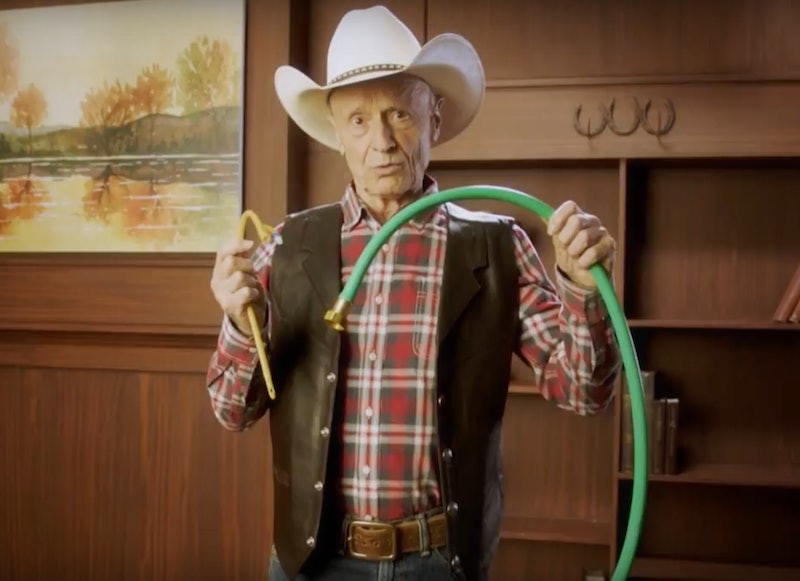 Just weeks after covering possible Republican Obamacare repeal and replace plans, John Oliver took on the actual American Health Care Act. "Try and think of it as the legislative equivalent of Pirates of the Caribbean 5: The Curse of Johnny Depp Getting Divorced & Needing the Money," Oliver jokes. "And as will be the case with that movie, the early reviews of this thing have been rough." But even if many Republicans are not happy with the law, there's still a chance it could become law. So watch Oliver's new ad for Donald Trump on healthcare.

It may be the only way to convince Trump this plan is a mistake. If you think back to the beginning of the season, Oliver made the point that the only way to truly reach Trump is to air messages on morning cable news shows, particularly on Fox News. Trump consistently references stories that he sees on them. So Oliver's team mimicked a catheter ad starring a retired cowboy to get Trump a message about how nuclear weapons work.

Now the catheter cowboy is "riding again" and doing the same thing for the AHCA. "Who better to tell Trump what this bill will do than someone who stands to be hurt by it, someone in his 60s, in rural America, with an unspecified medical condition that requires constant treatment?" Oliver asks. Well watch the ad and see what the cowboy will tell Trump, assuming he's tuned in, on Wednesday morning:

Hi, it's me again. I'm a professional cowboy and I use catheters. I've been cowboying for 25 years and there's two things I know: I don't like pain when I cath and healthcare is a complicated business. Everybody knows that. Literally, everybody.

After the "Nobody knew healthcare could be so complicated" burn, came the policy talk:

Also, if my premium goes up and subsidies go down, I'm going to wind up paying more. That's basic math there, fella. That's like replacing my catheter with a garden hose. I don't want that. I do not like pain when I cath. The point is, if that happens, millions of folk like me might get real angry, which is worth thinking about if you're the sort of person who really likes being popular. You get that, right? Right?

The cowboy really does pick up a garden hose and hold it next to a catheter, for Trump to get the point. And he sure hopes that president is convinced because he asks him again and again if he "gets that." He says, "You get that, right?" over and over again into the camera as the words, "Paid for by Partially Important Productions LLC" flash on the screen.

So if this ad, which will air on Fox & Friends, has any success, we may see Trump come out against the bill too.

More like this
'Waterloo Road' Is Back, With More Than A Few Familiar Faces
By Sam Ramsden and Vivian Iroanya
Yes, 'The Price Of Glee' Will Be Available To Watch In The UK
By Catharina Cheung
Matt Smith Proves He's Daddy Daemon In This Viral 'House Of The Dragon' Video
By Marina Watts
Prince William Condemns “Unacceptable” Comments Made To A Black Guest At Buckingham Palace
By Shahed Ezaydi
Get Even More From Bustle — Sign Up For The Newsletter