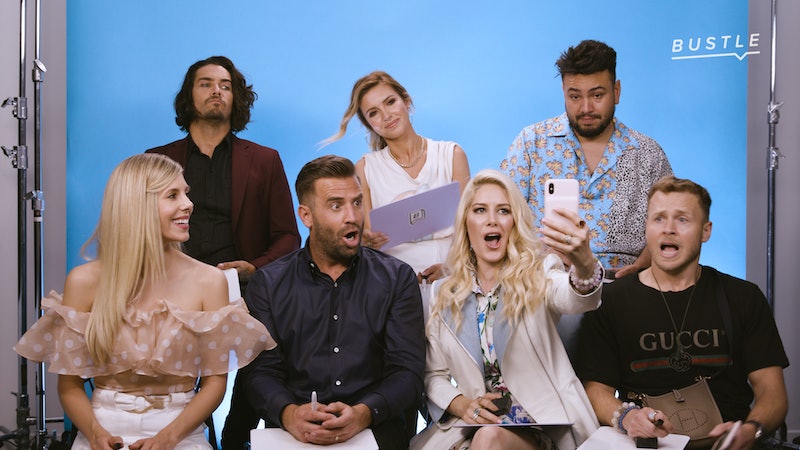 There's nothing quite like a reunion of old friends, particularly when there are years of old drama and grudges to dig up. So it's no surprise that viewers are over the moon about MTV's reboot of The Hills, one of the most iconic reality shows of our time. The cast is notoriously dramatic, but for a new video in Bustle's studios, old grudges took a backseat. The cast of The Hills: New Beginnings played a friendly game of "Would You Rather" and the results are pretty hilarious.

The gang was nearly all there — you'll remember Justin Bobby Brescia, Audrina Patridge, Frankie Delgado, Jason Wahler, Heidi Montag and Spencer Pratt from the original run of The Hills, in addition to new cast member Ashley Slack, who is Jason's wife. The questions put their allegiances to each other to the test in the most fun way possible and there's plenty to learn about how these folks operate with one another after all the history they've endured.

You might be surprised by some of these answers, but then again, what's a friendship without a few playful digs? Before they dive headfirst into the constant drama that is The Hills once again, let's see what they have to say on these sillier topics.

First up was personal style — would everyone rather have their wardrobe chosen by Heidi or Ashley? Everyone said Ashley, except for Frankie, who said he'd rather have Spencer in charge of his looks. A bold choice that seems like kind of a risk!

Next we asked if they'd rather give up sex or social media for a year, and in a group of people that makes so much of their living based on sharing their lives with the public, that might not always be an easy choice. Spencer chose to give up sex for that reason alone, claiming that it was a "business decision." He needs social media to sell those crystals, after all!

The cast went on to say they'd definitely let Frankie handle their social media presence before they'd let Justin anywhere near it — a decision Justin Bobby deemed "so rude." He's posted on Instagram a whopping dozen times in the past calendar year, though, as opposed to Frankie, who's posted four times in the past 24 hours. So perhaps they're making the correct decision.

Other things we learned from this game? No one really knows how to spell sriracha, but they agree they'd rather put that on all their food over whipped cream. Spencer hints that Heidi mysteriously got rid of all the girls he dated before her and Heidi says she'd rather live in a castle in the sky rather than an underwater palace, so she can be closer to heaven.

It was quite a journey through all these "would you rather" questions, but everyone had fun. Who knows whether this amicable spirit between all of them will last as The Hills: New Beginnings gets into full swing, but for now, at least, it's all fun and games.