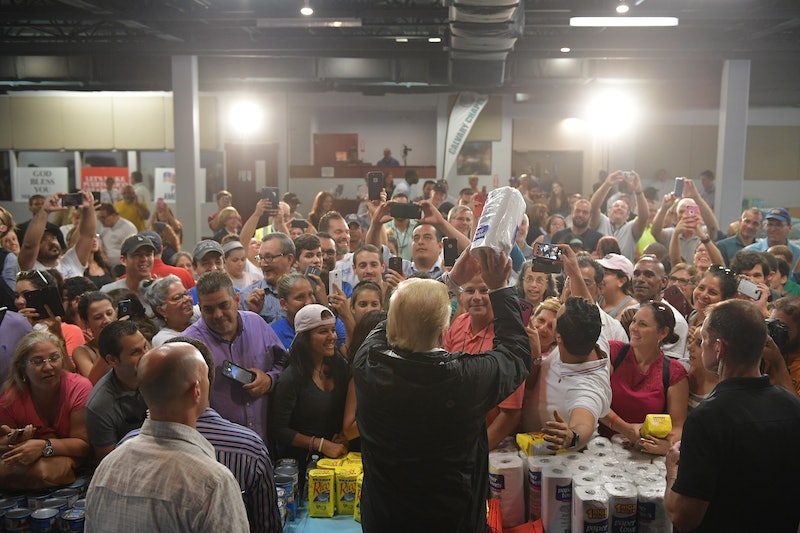 Donald Trump has carried out some eyebrow-raising spectacles in Puerto Rico after the powerful Hurricane Maria. In addition to criticizing San Juan mayor Carmen Yulín Cruz, giving a golf trophy to the Puerto Rican victims of Hurricane Maria, and telling locals in the affected region that Hurricane Maria had "thrown our budget a little out of whack," Trump justified throwing paper towels at hurricane-ravaged victims during his recent visit to Puerto Rico.

The defense from the president came during an interview with Mike Huckabee on Trinity Broadcasting.

They had these beautiful, soft towels. Very good towels. And I came in and there was a crowd of a lot of people. And they were screaming and they were loving everything. I was having fun, they were having fun. They said, ‘Throw 'em to me! Throw 'em to me, Mr. President!’ So next day they said, ‘Oh, it was so disrespectful to the people.’ It was just a made-up thing. And also when I walked in, the cheering was incredible.

"The cheering was deafening," Trump told Huckabee. It isn't clear which cheering Trump was referring to as the repeatedly-shared video only showed several people exclaiming, "Ah!" and "Oh!" until those expressions, too, audibly simmered down and were replaced with quizzical looks from the audience. In fact, after throwing at least seven rolls of paper towel into the crowd, the president only stopped when an attendee in the audience presumably asked for a selfie and both posed for the camera.

The president's paper towel incident took place on Tuesday when he was visiting Puerto Rico. After Trump's video surfaced in media reports, many observers found the president's gesture tone-deaf and disrespectful to the locals who just witnessed remarkable geographical and infrastructural devastation caused by the Category 5 storm.

Twitter users took to social media to air their views. One user said, "[I] thought I couldn't hate Trump more until I saw the clip of him throwing paper towel rolls at Puerto Ricans like it was candy at a parade. It was degrading to [Puerto Rico] citizens. He has downplayed this disaster. To say he is disgusting is a ridiculous understatement."

"Trump once again shows the world how tactless and embarrassing he can be. I'm referring to that free paper towel throwing in Puerto Rico," another stated.

Huckabee didn't raise any thought-provoking or hard-hitting questions about the perceived insensitivity in throwing paper towels at hurricane victims. Instead, during the interview with Trump, Huckabee excitedly told the president, "You were a rock star!"

The entire interview is worth watching, especially for the sake of trying to understand how Trump rationalizes his decisions and statements. In one particularly amusing part of the show, Trump took credit for the word "fake" while criticizing mainstream media for its "unfair" depiction of him. "I think one of the greatest of all terms I’ve come up with is 'fake,'" Trump said, "I guess other people have used it, perhaps, over the years, but I’ve never noticed it." To be clear, Trump claimed that he has never noticed a person deploy "fake" as a descriptor in the 71 years he's lived so far.

The bizarre interview wasn't just limited to Trump justifying his paper towel episode or his quasi-ownership of the term "fake" but other strange bits, too. For instance, Trump called Las Vegas shooter Stephen Paddock, who killed at least 59 people on Sunday night, "probably smart."

Out-of-context chunks of text can be misleading but Trump's full statement, even in its entire context, is just as outlandish. "This was a sick person — but probably smart," Trump told Huckabee. He also accused Iran of collaborating with North Korea, and said his tax plan "is not a tax [cut] for the rich." Quite an interview, indeed.