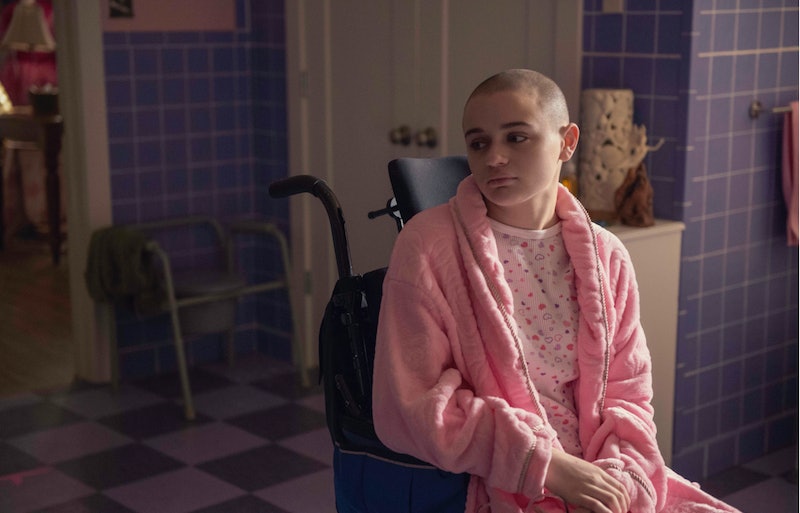 Spoilers ahead for Episode 5 of The Act Season 1. The Act portrays Gypsy Rose Blanchard as a naive and isolated young woman. She hasn't attended a traditional school, and her protective mother, Dee Dee, allows her little freedom to make friends or talk to anyone without her supervision. So, Gypsy turns to the internet — sneaking out of bed to watch makeup tutorials on YouTube, and chatting with men online. Eventually, that curiosity leads to Gypsy exploring her sexuality on The Act — which, even knowing the show is a fictionalized interpretation of real events, can feel uncomfortable and intrusive to watch given the dark context of her story. However, it also illustrates that Gypsy's circumstances have complicated every aspect of her life, including the ones that all young people go through.

In the show, Dee Dee manipulates her daughter into believing she is younger than she actually is. She tells doctors that Gypsy is mentally handicapped and falsifies documents to misrepresent her age. She also encourages Gypsy to indulge in princesses, fairy tales, and other child-like entertainment, and interjects whenever topics of dating and sex arise. But as Gypsy, who is in actuality somewhere in her late teens or early 20s, begins to reach the throes of adulthood, she becomes increasingly curious about the world — and men — around her. She starts to lust after the handsome boy mowing the lawn outside of her window, and begins an online relationship with a man named Nick (a character based on Nicholas Godejohn, Gypsy's real-life ex-boyfriend who was convicted and sentenced to life in prison for his role in Dee Dee's eventual murder).

However, Gypsy's circumstances further complicate the already messy, complex nature of human sexuality. Due to her repressive upbringing, it feels jarring to see her jump so suddenly into an intense sexual relationship, particularly since she hasn't had much of an opportunity to learn or talk about sex before engaging in it. Her second-ever kiss, as far as we know, also leads to her first time, and she's missing a lot of the baby steps that may have better prepared her for what to expect — both physically and emotionally.

Certainly, there are other young people who don't receive comprehensive sex education before having sex, but Gypsy's situation is inarguably more layered. For Gypsy, Nick isn't just a boyfriend, he is a life raft — someone she sees as her only chance to escape a toxic home. That doesn't mean Nick is pressuring or forcing her into anything, but it inevitably shifts their dynamic.

All of which is to say that The Act — in more ways than one — falls into a gray space that feels conflicting and hard to navigate. Gypsy is someone who's spent her whole life stripped of her agency. Sexual experimentation grants her the sense of freedom and independence she's clearly been craving. And in some ways, that's empowering. But it can just as easily be seen as a reaction born from trauma. It's likely that, in The Act, Gypsy, too, feels stuck in that gray space — and seeing it unfold only sheds more light on her mindset.