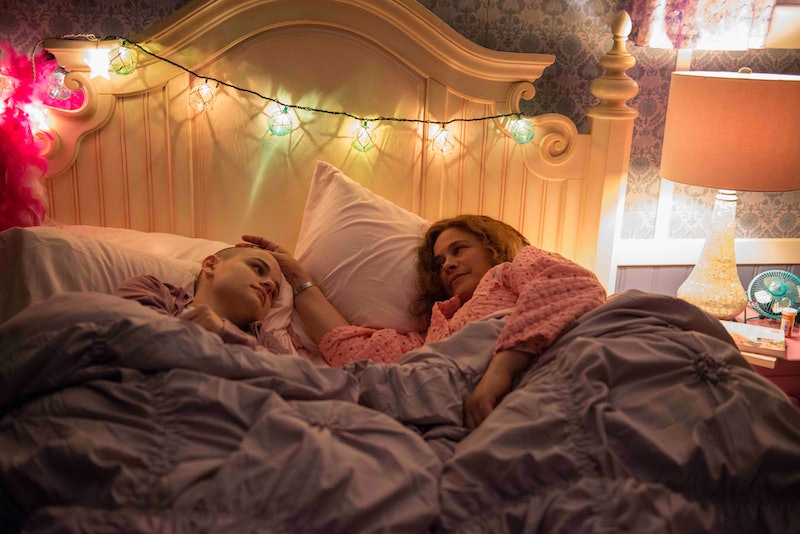 Spoilers ahead for the first three episodes of The Act. In Episode 2 of Hulu's The Act, Gypsy Rose Blanchard (Joey King) wheels herself into the bathroom to look into the mirror, only to be horrified by the face staring back at her. After sneaking candy every night because her mother, Dee Dee, falsely told her she's allergic to sugar, she had to get all of her rotted teeth removed. Her mouth is swollen and bruised, her head is still shaved, and despite her previous attempts to feel more feminine and grown up (her mother has also been lying about her age), her self-image has been nearly destroyed. It's a deeply uncomfortable and heartbreaking scene to witness, but it's just one of many contained within the show's three episodes thus far — which is exactly what makes The Act so hard to watch. Even though, by now, most viewers are familiar with the true story the series is fictionalizing, seeing it happen, not just hearing about it, can make even the most seasoned true crime fans squirm.

Documentaries like HBO's Mommy Dead and Dearest have already outlined Gypsy's real case in detail. After being raised to believe she was disabled and chronically ill, Gypsy orchestrated a plot to murder her mother with the help of her then-boyfriend, Nicholas Godejohn. (Both admitted to their roles in the murder, and have since been convicted and sentenced to prison). But The Act doesn't portray the story in the way true crime fans have become accustomed to — through interviews and photos and expert analysis. Instead, it takes the most gruesome aspects of Gypsy and Dee Dee's life together and splays them out in vivid detail: the gaping stab wounds on Dee Dee's dead body, Gypsy's look of disgust as she pulls out her decaying teeth. It's one thing to be presented with the cold, hard facts — it's another to see them play out in front of you, even knowing the show has taken some creative liberties.

With more straightforward true crime, you can often feel desensitized to the story, devouring every lurid detail as you would a prestige drama. Amid all the inevitable theorizing and speculation, it's easy to forget there are real stakes — and people — involved. There's a certain degree of separation that seems less morally conflicting.

The Act, of course, is a dramatized version of real events, but the feeling is markedly different. Watching Gypsy and Dee Dee's relationship grow increasingly toxic, you feel less like an active listener and more like a passive observer. You're not just hearing Gypsy's story — you're watching every grisly moment as if you're in the room as it happens, unable to help, and yet unable to look away.

Another particularly chilling scene comes when a social worker visits the house, and Dee Dee sprints to the medicine cabinet to give Gypsy "sleepy baby" pills. When the woman enters, Gypsy is too strung out to talk, but even when she's able-minded, she's torn between wanting to protect her mother and wanting to escape her. And though safely at home, you feel just as trapped and suffocated as the character you're watching.

Some critics have mentioned that The Act, while compelling, might be too difficult for some viewers to stomach. Others have praised its daringness to put a mirror up to the darkest parts of humanity, no matter how painful. Whether or not The Act goes too far depends on your own ethical boundaries, and that's a debate that's sort of inherent to all true crime. How do we reckon with television that can be unpleasant to watch, but still might have an important story to tell? And how do we decide how much discomfort we're willing to endure when watching? Ultimately, everyone has to find their own limits, but it can be harder to do so when watching a dramatized narrative in lieu of a more detached documentary.

Whatever your feelings about The Act and the complex questions it raises, one thing is clear: the show isn't afraid to submerge its audience in every dark corner of this story. Proceed at your own risk.