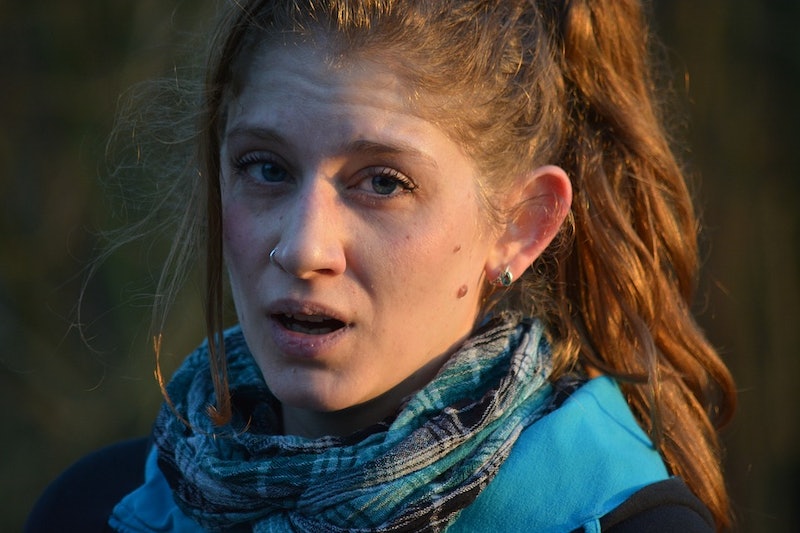 Ever since birth control was first made available to women nationwide, we've been presented with all kinds of information about contraception, and we've learned a lot ourselves from using it firsthand. There are some common side-effects we know to look out for when we first start taking hormonal birth control. We expect to see things like like weight gain, swollen breasts, and more intense mood swings, but we also know that these side effects don't happen to everyone who takes the Pill.

Over the years, we've learned about the scary side effects of hormonal birth control, like increase of risk for blood clots or certain cancers, and even depression, in some cases. Even though these are worth considering, and they can be sort of frightening, they don't tell the whole story.

"With every bad usually comes a good," Alyssa Dweck, M.D., gynecologist in New York, assistant clinical professor OBGYN, and author of V is for Vagina tells Bustle. It's important to know both sides of the coin so you can make the best contraceptive choices based on your own health history. Keep in mind some of the below side effects only affect a small percentage of the population, so just because you read it, doesn't mean it will happen to you. As always, bring any specific questions to your doctor, and the two of you will figure it out together.

So, with that in mind, here are a few of the ways you might not realize birth control could be messing with your health.

It Could Increase Your Risk For Depression

"The birth control pill has recently been shown in a study to perhaps increase the chance of being diagnosed with depression in young women," Dr. Dweck tells Bustle. The University of Copenhagen published a study last year that surveyed 1 million Danish women between the ages of 15 and 34 over the course of 13 years. They found that women on the mini-pill, which is progestin-only, were 34 percent more likely to be diagnosed with depression, and the women on the basic Pill (estrogen and progestin combined) were 23 percent more likely to be depressed.

However, Dr. Dweck notes that "there were some limitations to the study," so you shouldn't take it as gospel. For example, she reminds us that the study was taken in a place where there is a lot less sunlight than usual during the day, which could have something to do with the higher rates of depression. More importantly, though, keep in mind that the actual numbers are quite low. About 2.2 out of 100 women on hormonal birth control became depressed, and it seems to be much more common in women who are predisposed to mental illness.

It Makes You More Likely To Contract Yeast Or Bacterial Infections

"These things are complicated with various influencers, but the Pill may be a part of it," Dr. Dweck says. It's not an extremely common side effect, but they're certainly things to consider, so if you've struggled with either of these infections in the past, you may want to take the necessary precautions to ensure you don't catch them again.

It Could Increase Your Risk For Blood Clots

There's been a lot of talk lately about how dangerous the Pill can be when it comes to risk for blood clots or pulmonary embolism. It's pretty much the number-one risk you hear of in conversation about the birth control pill. A study last year at the University of Nottingham in England showed that women who take the newest forms of the Pill are 1.8 times more likely to develop blood clots, which could travel to the heart or brain and cause heart attack or stroke. Yikes.

“Anything containing estrogen ups your chance of blood clots,” Dr. Dweck confirms. It's certainly something to think about if you're thinking about going on the Pill. Dr. Dweck says there are other factors that significantly increase your risk for blood clots, such as obesity, genetic predisposition for developing blood clots, and smoking cigarettes.

You Might Be More Likely To Develop Cervical & Breast Cancer

While your risk of developing endometrial and ovarian cancers lowers when you take the Pill, Dr. Dweck says, "The one cancer that may go up with Pill use is cervical cancer." The journal The Lancet published data from 24 worldwide studies, showing that women who take the Pill are more likely to develop cervical cancer, but that risk goes away after they stop using this form of contraception.

Dr. Dweck is hesitant to say the Pill directly causes cervical cancer, though. She says many women on the Pill don't use condoms, so they "therefore are automatically exposed to a higher viral load of HPV." This may have something to do with the higher chance of being diagnosed with cervical cancer.

Additionally, studies from the Collaborative Group on Hormonal Factors in Breast Cancer revealed that women who are or were on the Pill at some point have a slightly higher risk of developing breast cancer than those who have never taken it.

Just because you take the Pill doesn't mean all of these things will happen to you. Because they have affected Pill-taking women before you, though, they're definitely worth talking about with your doctor. Keep in mind that there are a lot of choices out there, so if one form of hormonal birth control doesn't work, there might be another that feels like it was tailor made for you.