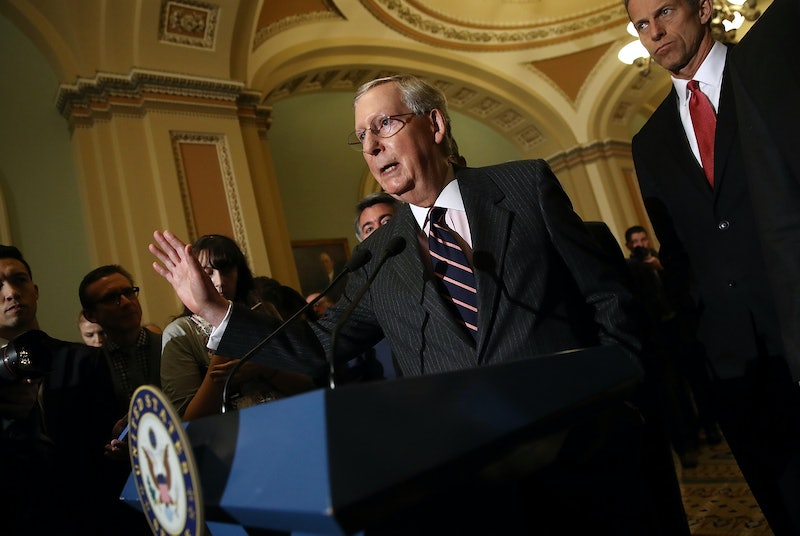 On Tuesday evening, Senator Elizabeth Warren was officially sanctioned and silenced on the Senate floor when she tried to read a letter written by Coretta Scott King during Senator Jeff Sessions' Attorney General confirmation debate. While this incident inspired a powerful feminist rallying cry, Mitch McConnell's words about Warren were also sexist because of the condescending, "mansplaining" way in which he chose to speak about his female colleague—and the way in which he avoided rebuking the male Senators who subsequently read King's letter after Warren was silenced.

Warren was silenced on the Senate floor as she began to read a letter from King criticizing then-nominee for Attorney General Jeff Sessions' civil rights record. In describing the decision to sanction Warren, Senate Majority Leader Mitch McConnell stated, "She was warned. She was given an explanation. Nevertheless, she persisted,” seemingly implying that Warren's actions had merited the invoking of the (rarely used) silencing rule.

McConnell's words about Warren epitomized the concept of "mansplaining," when a man speaks to or about a woman in a condescending or patronizing way. McConnell's words imply a lack of respect for Warren; they come across as very demeaning and are similar to words one might use to address a child, not an adult, colleague, and fellow senator.

The words McConnell used to describe Warren's actions, coupled with the fact that several male Senators, including Jeff Merkley, Sherrod Brown, and Bernie Sanders, were subsequently allowed to read portions of King's letter on the floor without being sanctioned sends a very clear message that sexism is still very much alive and well in the U.S. Senate. According to McConnell's spokesperson, male senators who read King's letter aloud weren't silenced because Warren's speech preceding the reading was the apparently the actual cause for sanction.

Following Warren's silencing on the Senate floor, fellow senators as well as thousands of people on social media rallied to show their support for her. Indeed, McConnell's words about Warren, particularly the "she persisted" phrase, were widely circulated on social media as a feminist "call to action" of sorts, praising Warren's actions and reminding women everywhere to "persist" in fighting for justice, as Warren and many other brave women have done in the past.

The fact that social media managed to turn McConnell's sexist and disparaging words and actions into a unified call to action for female empowerment is wonderful and amazing. Indeed, I am certainly in favor of taking ownership of words meant to be discriminatory and disparaging (case in point, "nasty woman") and turning them into powerful rallying cries to fight the very sexism they were meant to perpetuate.

Nonetheless, while it is absolutely important to embrace these words as a call to empowerment, it is still also imperative to also acknowledge them for what they were in their original iteration—sexist, mansplaining remarks. It is also crucial to not let McConnell off the hook for his utterly disrespectful words about his colleague and fellow Senator.

I believe women (and men) should absolutely persist in taking back McConnell's words and using them to inspire positive change, yet also simultaneously persist in making sure McConnell and the senators who voted to silence Warren are held accountable for their actions.