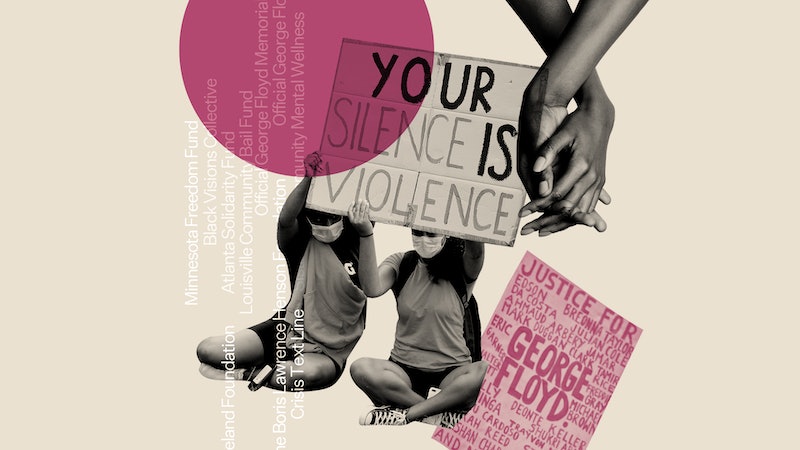 We watched the video of George Floyd’s death — all eight minutes and 46 seconds of it — endlessly. We saw the images of disgraced former Minneapolis police officer Derek Chauvin’s knee lodged into Floyd’s neck as two officers helped keep Floyd pinned to the ground, and as another stood by and watched him die. That video broke every Black person's heart in America, not only because it was disgusting to watch another member of our community die at the hands of the police, but because we were already at our boiling point, on the edge of what our mental health could take.

In the two weeks preceding George Floyd’s death, several other stories of injustice and brutality against Black people made national and international headlines. Thanks to Black activists, the story of Ahmaud Arbery, a 25-year-old Black man who was chased by three white men and shot dead in a coastal South Georgia neighborhood, received widespread coverage. The problem is that Arbery was killed in February and the men weren’t arrested until the video of his death became public in May. Even then, it was public outrage that caused Georgia officials to take legal action, not an obligation and oath to work for their constituents. Black people in America finally felt a glimmer of hope at the arrests and the promise of a potentially neutral judge after five district judges recused themselves. But before we were able to exhale, Breonna Taylor was headline news.

In mid-March, Louisville police officers used a so-called “no-knock” warrant to barge into the home of Breonna Taylor, a Black woman, in the middle of the night. The 26-year-old award-winning emergency room technician was shot by police at least eight times. Breonna was left dead, and the officers who raided her home and killed her are still employed. It took months for the story to receive national attention, and when it did, we were already coping with the loss of Ahmaud Arbery. But we still couldn’t exhale, because looming around the corner in May was George Floyd’s death and Amy Cooper using her privilege in an attempt to harm a Black man.

What Amy Cooper, a white woman, did to Christian Cooper (no relation), a Black man, in New York’s Central Park put a spotlight on the microaggressions Black people experience daily. As her dog tore through planting, she encountered Christian, who was bird-watching and asked her to leash the dog, since they were in a part of the park that required it. Instead of following directions, she called the cops, changing her tone, pitch, and inflection to appear traumatized and in deep fear of Christian. (As of May 29, it was still being debated whether Amy would face charges of falsifying a police report.) Her apology is not accepted by the Black community. She is the kind of white woman that Black parents warn their kids about, for fear that her racism could get their kids killed.

This all came into the Black American public consciousness around the same time. We were at our breaking point. Wouldn’t you be?

Now, add these tragedies to the countless other killings of Black men and women that go without national attention, or the ones that did get coverage: Michael Brown, Eric Garner, Tamir Rice, Jason Harrison, Tanisha Anderson, Walter Scott, Tony McDade, Freddie Gray, Aiyana Stanley-Jones, Botham Jean, and Atatiana Jefferson, to name a few. We haven’t even gotten to the fact that simultaneously, Black Americans are dying at an alarming rate from the coronavirus, due to underlying health conditions, health inequities, poor quality of care, and housing and transportation discrimination.

Knowing that my parents, grandparents, and the matriarch of our family, Lucille Young — my 104-year-old great-grandmother — have been here before is demoralizing. But we don’t have the option to stop fighting for justice.

Companies and non-Black people who describe themselves as “allies” can do the real work alongside us and demand change. Companies that post public remarks about racial disparities on social media without taking action internally are useless. If you want to be a true change agent, start by looking at leadership teams and hiring practices. Are Black people represented at every level of your company? Have you provided resources for Black employees dealing with grief and trauma over these deaths and injustices? Have you provided training to make sure your non-Black employees are not being insensitive to the real experiences of Black colleagues? If not, those should be your immediate first steps.

Non-Black people must understand that your Black friends are not your therapists who can release you from your white guilt. Non-Black people must consider that Black people are exhausted. It’s time to take the initiative to explore the deep-seated racism in this country and find solutions on your own. Black people did not create racism. It’s not solely our burden to end it. Organizations like Color of Change, Minnesota Freedom Fund, NAACP Legal Defense and Educational Fund, and Advancement Project are excellent places to start. Take on the issues of racism and oppression as your own. Denounce family and friends who make off-color comments about the movement — every single time they do it.

President Obama called on the police and public to create a “new normal,” because turning back is no longer an option. This year has made one thing crystal clear — things may never go back to how they used to be. Ask yourself: Why would we ever want them to?

More like this
At 28, Rosie Perez Risked Her Career To Stop Playing Stereotypes
By Gabrielle Bondi
Watch Jacinda Arden’s Devastatingly Honest Resignation Speech
By Sam Ramsden
8 Charities To Donate To During Black History Month
By Alexis Morillo
These Artists Are Reimagining Black History Month To Create A Better Future
By Katie Mitchell
Get Even More From Bustle — Sign Up For The Newsletter
From hair trends to relationship advice, our daily newsletter has everything you need to sound like a person who’s on TikTok, even if you aren’t.