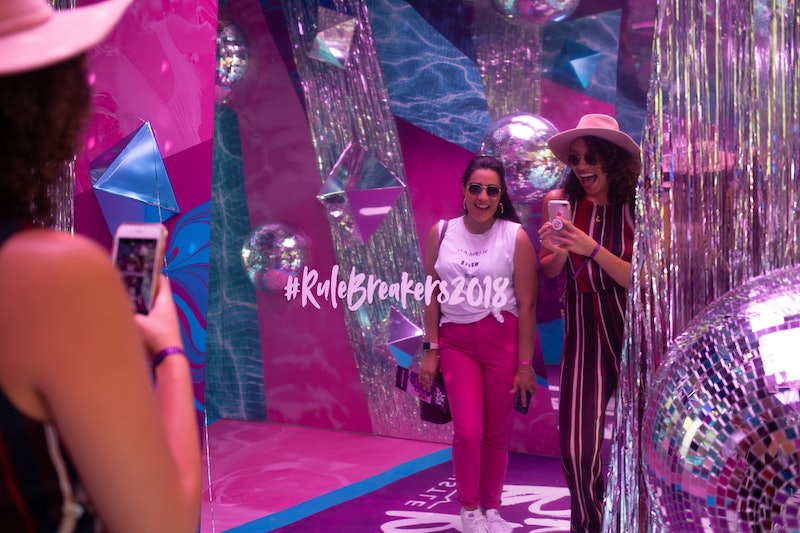 Learning rules is a crucial part of a child's cognitive development. Some are important for kids to follow, while others are important to break, and everyone has early memories of feeling the consequences of doing both. Those experiences are revealing, and often hilarious, so we asked people at the Bustle Rule Breakers event on Saturday about their first memories of misbehaving.

Some people said that it was difficult for them to be transgressive as kids. "I had to be taught to break rules, specifically," said Becky, who's now 39. She explained that a summer camp counselor helped her overcome that discomfort within the relatively "safe" environment of camp, where there were "no actual consequences." The counselor "had to convince me to break into the canteen and steal candy and ice cream at night," Becky said. "She had to convince me that it was OK to go skinny-dipping in the pool when nobody was watching."

Younger kids often have a less flexible approach to rules than adults do — to them, things are often either "right" or "wrong." Scholastic Early Childhood Today notes that preschoolers can get "confused or annoyed if they sense a rule is not being consistently enforced or broken." According to Today’s Parent, children in the middle of their adolescence (6-8) often want to pay special attention to whether rules are being followed to determine whether situations are "fair."

Alexa and Shailyn, who have been friends for over two decades, said that they both had an easier time following rules at school but a harder time at home. Sometimes frustration came when one of them did something that the other perceived to be "wrong." Shailyn said that she often didn't make her bed and that Alexa would "get so annoyed with me." Alexa laughed, adding that the messiness bothered her so much that she'd step in herself: "I would make her bed."

Children gradually learn to create rules for themselves, as opposed to just accepting the ones they're taught. Some psychologists think this happens as they gain more personal experiences. These experiences help their prefrontal cortexes develop, which allows them to engage in more reflective thinking, according to a 2015 report from the Institute of Medicine and National Research Council.

Elisa, 25, describes how she "screamed a lot" when she wasn't supposed to as a kid because she "wanted to be heard." She remembers one time specifically when she was at an event with her dad and interrupted the male speaker with her shrieks. She adds that the feeling of wanting her voice heard is something that "I bring with me to this day. I'm a petite woman, and I feel like often times people don't take me seriously for that reason."

Other examples people gave for youthful rule-breaking carried less emotional weight but are unforgettable nonetheless. "One time I microwaved gummy bears and it exploded," said Alison, 33. "My mom was so mad because it was all sticky." When asked why she'd opted for that particular experiment, she said, "I wanted melted gummy bears! I thought it would turn into liquid and me and my sister could drink the gummy bears or something." Liquid gummy bears for the rule breaking win.