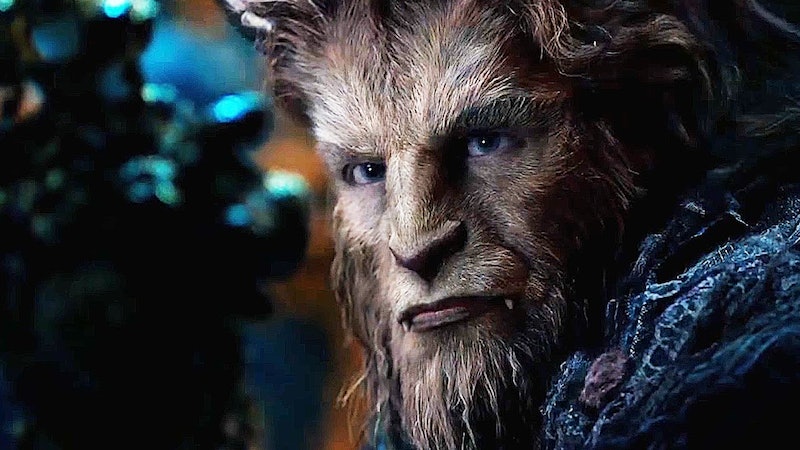 The opening narration of Beauty and the Beast presents us with a question as old as time: But who could ever learn to love a Beast? Trouble was, that question was never answered — because what was supposed to be a "beast" was clearly the collective manifestation of every hipster you'd ever dated, minus, like, one pair of thick-rimmed glasses, and Arcade Fire on vinyl (but to be fair, there wasn't much of that happening in the 1800s yet, so I've heard).

I mean, I'm not complaining. It makes it a lot less squicky when you're like, "Oh, I ship this? But it's also bestiality? But I also want them to make out and am weirdly attracted to his antlers??" Because upon closer examination, this is no half-human, half-animal, but just your garden variety Brooklynite out on a Sunday bike ride to catch the Wes Anderson matinee with the rest of their plaid-clad friends. (Guys, I own, like, 10 beanies. No hate.)

If you missed it the first time because you were enamored by the glory the French countryside and singing teapots and the indomitable duo of Audra McDonald and her tiny dog, then no worries, because I could basically write you a thesis on Hipster Beast. BE MY GUEST:

I Mean, Look At His Hair

And all the hipster beards in Portland wept, for there were no worlds left to conquer.

I've actually hinged this entire belief that the Beast is a raging hipster on his LITERAL GUFFAW when Belle says Romeo and Juliet is her favorite Shakespeare work, and how he then proceeds to judgmentally AF say, "Of course," and drag her to the library because there are "better things to read." This is literally as close as Disney can get to calling someone basic without calling them basic. He might as well have thrown his lukewarm almond milk stevia flat white in her face.

He Throws Wild Parties In, Like, The Middle Of Nowhere?

Yeah, you're not Lyft-ing home from this hot mess. But it's so ~exclusive~ that everyone's willing to make the trek, even if you risk getting literally eaten by wolves to get there. This is the 1800s France version of that hidden speakeasy in Williamsburg adjacent to ZERO subway lines that your cool friends are always trying to drag you to when there is a perfectly respectable happy hour across the street from your office, thank you very much.

He Loves Paris, But He's Also Totally Over Paris

Belle is, like, clearly having a moment on that Black Plague-ridden tower of sad scraps, and the Beast is all, "Wanna go to the Notre Dame? But I mean, like, whatever, it's so played out, amirite?"

His Palace Is Basically The Brooklyn Of The Monarchy

I obviously have a lot of questions about the French governing system in regard to the Beast — like, who's running this show? Is there still a king? Is everyone just running amok? Gaston referenced a war, but like, who was leading it if their supposed ruler was a 7-foot-tall walking buffalo? — but the obvious answer is that he lives in some kind of satellite palace to the main one, perhaps a summer palace, if you will. Aka, where hipsters flock — to the prettier, less congested version of Manhattan, just across the river.

His Real Name Is Supposedly Adam, Which Is The Most Hipster Name Of All Time

DON’T @ ME, ADAMS. You know your truths.

In conclusion, the movie should be retitled Beauty and the Unrepentant Hipster, a fitting remake for the millennial generation. That being said, if the Beast is a hipster, Gaston is that guy who swiped right on everyone on Tinder and has a bunch of gym selfies and an eggplant emoji as his bio, so... Belle made the right call.