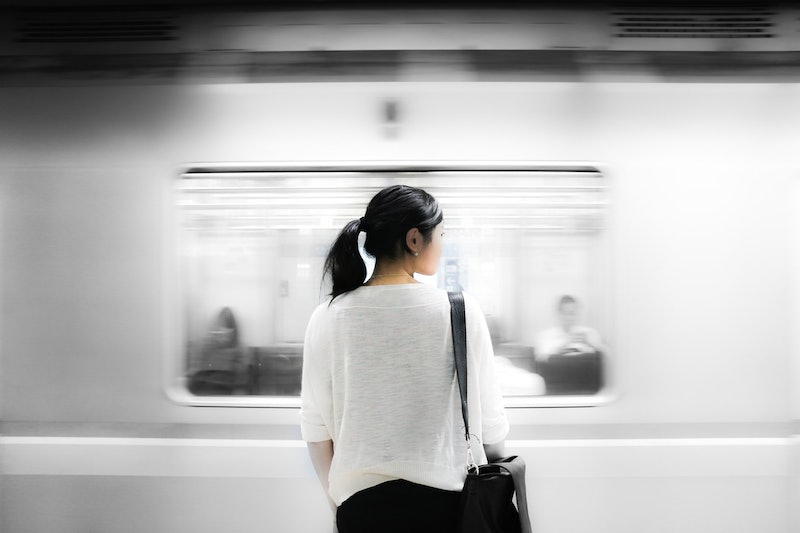 If you think you're the only one not killing it at life right now, it's not true. Today's curated social media culture might make it seem like it's just you who's not living the dream, which is why we need to talk about Millennial women and depression. I'll let you in on a secret: You're not the only one who doesn't have it all figured out. One in five people ages 18 to 35 report being depressed, especially at work, with Millennial women being twice as likely to experience depression as men. So, why is the rate of depression so high among Millennial women?

"There is a generation of young women who seem overworked and underwhelmed," Los Angeles based Licensed Marriage and Family Therapist Michele Goldberg tells Bustle. "They have adopted this notion that they must have a successful career in order to be valuable, falling into achievement addiction without questioning whether or not their pursuits are compatible with their values."

Additionally, New York City Psychotherapist Katherine Schafler said on her blog that the high unemployment rate for Millennials, coupled with crippling pressure to succeed, makes it hard to maintain a lifestyle that keeps depression at bay.

"The circular thoughts and feelings involved in choosing the right professional and personal trajectories create a vortex of anxiety that spirals you into an anti-climactic stuckness."

While it might feel like everyone but you is busy "having it all" as you scroll through your Facebook feed, here are a few things to remember when it feels like you're failing at life.

Social Media Is Not Real Life

Depending how old you are, you might not remember a time without the internet, cellphones, or social media. These technological advances have created a truly global society, which is good. They have also given a whole new meaning to the term "keeping up with the Joneses," where failing is perceived as socio-economic or cultural inferiority, which is err, not so good.

"Instead of building a relationship with themselves, identifying and regulating their emotions, women are busy engaged in an indefinite conversation with thousands of other people," Goldberg says. "Of course the highlight-reel phenomenon doesn't help."

Before our 24/7 digital culture, there was still a fair amount of posturing that went on as people presented the best version of themselves to their friends and neighbors. But, in today's social media maelstrom, this kind of posturing is pretty out of control, and even I am guilty of it.

A few years ago I was traveling for work, and I posted a picture to Instagram of me and a friend having champagne on his stoop in New York City's West Village. One of my friends, whom I hadn't seen in a few years, commented that she envied my "glamorous" life. I instantly felt a twinge of sadness, because let me tell you that for every night I spent drinking Champagne on a stoop while globetrotting for my job, I spent 10 more battling major depression, and spiraling into a deep pit of despair. I once literally spent several hours crying in the bathroom at the airport in Paris because I missed my flight.

I did not post that moment on social media, which offers a one-dimensional perspective, and it's a pretty safe bet that if you compare yourself to your "friends"online, you're definitely going to end up feeling like crap.

"The conversations [on social media] aren't wholly authentic, and they tend toward an artificially positive slant," Goldberg explains. "The constant distraction social media provides is more dangerous than its false connection. Women are rarely present, rarely mindful of their thoughts, feelings, and body sensations, because they are busy focusing on someone else, something else, by consuming the unending supply of information that regenerates moment-to-moment on their Instagram and Facebook accounts."

In addition to always being on social media, women are over-committed at work, too. Schafler writes that the mixed messages Millennial women receive about "having it all" can result in an inevitable quarter life crisis.

"But there’s no time to slow down when you can have it all (as Millennial women are constantly told)," Schafler said on her blog, "so it’s understandable when so many young women respond to the immense amount of paradox pressure around them by constantly pushing themselves to get up and go, even if they’re too dizzy to see the rabbit hole of depression right in front of them."

Goldberg tells Bustle she has noticed that, when given the choice, Millennial women choose more work assignments for the sense of pride and purpose it affords them, and later to regret that they dedicated all of their time to work tasks when what they hunger for most is relationships and personal connections.

"Unfortunately, some women (not all) still hold onto the biological reality that time matters, and they secretly fear they are wasting their fertile years proving themselves in the workplace," she says. "Having it all has become more of a pressure-filled mandate than an opportunity or choice."

This is a system that sets you up to fail, and U.S. News has tips for how to set boundaries at work so you don't burn out, and you can also have a real life.

It's OK To Ask For Help

While the balanced dual-role life is something you may have envisioned as achievable, the burden of perfectionism you place on yourself in carrying it is often too heavy a weight to shoulder, Goldberg tells me.

"The energy it takes to perform at that level in both worlds is not exhilarating; it's exhausting," she says. "Depleted women have a hard time forging ahead in their family lives when they already feel overextended in their work ones."

A study from the University of Kansas used gender socialization theory to explain why women are suffering at higher rates than men. The study reported that "Society puts certain expectations on people based on their gender from a very young age. ... Women experience significantly higher rates of role overload or feel that they are unable to complete their assigned duties in the work time allowed."

I can relate. With the advent of the smartphone, I eventually found myself in a work situation where I would wake up at 6 a.m. in the throws of an anxiety attack several days a week at the mere thought of addressing the 200+ emails that flooded my inbox overnight. Coworkers contacted me at funerals to ask non-urgent questions. I literally felt like I was always working, and I had no life outside of my job.

While I have struggled with depression all of my life — I hit a new low I was not sure I could recover from. However, I did bounce back; I left that job in favor of something I actually enjoy. It took a long time to get back to being myself, but I did it with the help of a support network. If you feel yourself slipping, it's OK to ask someone to help break your fall.

"You have to stop, challenge the social order, question whether your values are in alignment with your lifestyle, and own your own desires in life," Goldberg advises. "If you want a family, you have to carve out time to date. And, in my practice, many young women feel guilty and reluctant doing so. It's a true bind. We're also farther apart from a community model of social organization than we ever have been, with the result that women feel in competition, adrift, and alone."

Talking About It Makes You Feel Better

If you've been running on fumes, eventually you're going to run out of gas altogether.

"For many young women, the fall is fast, and the landing is anything but soft. Important life decisions are often made from this disoriented, rushed state, typically resulting in living a life that’s not even close to an authentic reflection of who you are and what you want," Schafler said on her blog. "This is about the right time for isolation to set in. Everyone on Facebook is looking happy, refreshed, recently promoted, and engaged, all while you’re binge-watching Netflix and mindlessly snacking on a drug-store inspired menu of processed foods."

Check, check, check. I have watched all seven seasons of Gilmore Girls three times, sometimes while eating Taco Bell. I'm here to tell you that the struggle is real. Schafler added that the key to overcoming this cycle is to normalize the developmental challenges Millennial women face instead of ignoring they exist, and acknowledging that other factors like changes in hormones contribute to depression. By keeping these feelings to yourself you reinforce the notion that you're the only one suffering, and research shows that's simply not true.

"The twenties present a unique curriculum for learning about life, love, self-forgiveness, boundaries, empowerment, self-care and what it means to truly be healthy," Schafler said. "Taking on these lessons alone is not what being independent is about. Whatever being at your best looks like for you, you deserve to be there."

Keep Your Eyes On Your Own Paper

One thing Lauren Graham says in reference to comparing yourself to others, which has been immensely comforting to me, is "keep your eyes on your own paper." This phrase from elementary school just might be the best advice out there for coping in today's over-connected world.

"I’ve just gotten more peace out of worrying mainly about myself, and not getting too competitive or worried about other people’s lives," Graham said in an interview with Main Line Today. "I have a thing I say often, which I did not invent: 'Keep your eyes on your own paper.' And that’s been very helpful to me."

This basically means that measuring your accomplishments against someone else's is not going to make you feel better (trust me, I've gone down this rabbit hole). You are an individual, and there is no magic time frame in which to achieve your life goals. Everyone is different, and that's OK.

When perusing social media, remember that it's not real life, and most of those people are likely struggling too. If you are struggling, tell someone. You can even use an app to find a therapist. I know it's hard, but you can do it, because life is short, and you deserve to be happy — whatever that looks like for you.