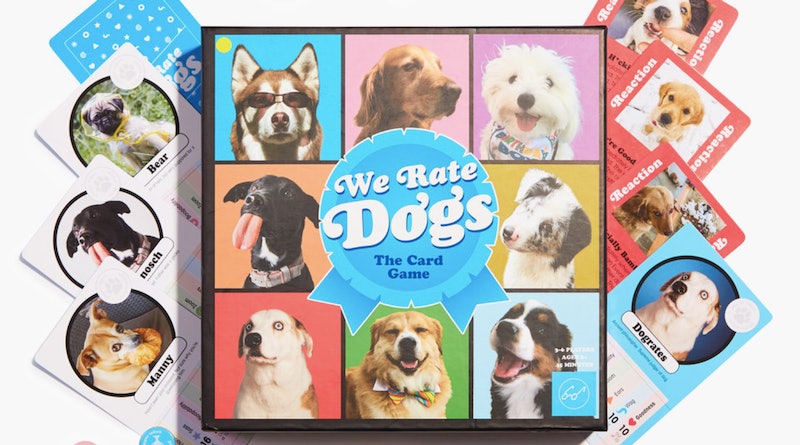 Though this homage to the WeRateDogs Twitter account is a card game, it also has a trading card vibe to it. Each card displays a portrait of a particular pup. Underneath is a bio so you can get to know the competitors a little better. Skipper is, for example, is "volunteering for more belly rubs please and thank you." Below the bios are ranking categories and how that doggo scores. But they're not based on classic dog show standards such as obedience and agility. The We Rate Dogs card game's scoring categories are concerned more with "floof" and "sass". Obviously, the minimum ranking is 10/10. Because doggos are never less than.

You'll want to collect all the cards. But alas, this is a game and not dog portrait collectable art. The card game can entertain three to six players at a time. Each player is dealt seven cards. Pick your favorite dog in your fan of cards and enter it into a dog show against the other players. From there the dogs are ranked in 7 categories including Floof, Sass, Boopability, Zoom, Ears, Wag ,and Goodness. Players can use event cards to improve ratings. But only one goodest doggo will take the hecking title of "Best in Show."

The popular Twitter account WeRateDogs, known as @dog_rates, has been rating dogs since 2015. Pupload a picture of your doggo, send it into WeRateDogs, and receive a rating. Take Golden Retriever Erynn, for example: "This is Erynn. She had a very busy day at the beach. Took a sandy snoozle and found a magical ocean orb. 13/10 will never forget it," WeRateDogs tweets. While it's easy to fall into an endless scroll of ratings on the WeRateDogs Twitter and Facebook, it's now your turn to rate.

This card game is sure to top the pile of board games stacked in the living room. On game night, who wouldn't want to stare at pupper portraits? We Rate Dogs - The Card Game is available on FIREBOX and retails for $28.99. Each game will take approximately 30 to 60 minutes to complete, but who says you only have to play one round each time? Set out a plate of treats and play until each pupper has had their go at Best in Show.

The WeRateDogs Twitter account features doggos of all breeds a pedigree. It doesn't favor pups over senior dogs. It doesn't feature purebreds over rescue mutts. Each type of doggo gets a spotlight and all doggos exceed a 10/10 rating. It is overwhelming perfect. Just like the new We Rate Dogs game. When it comes to playing with cards, Go Fish another day and Rate Dogs today.