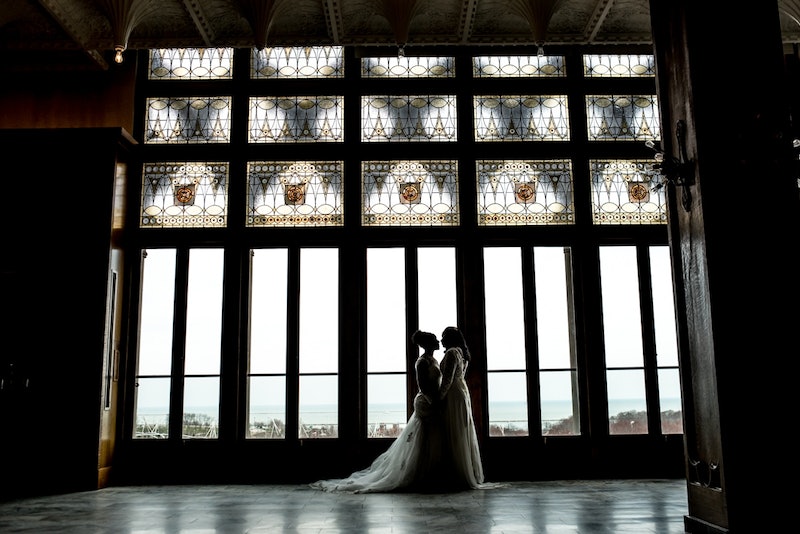 Cassaundra and Alishe White at their wedding. Photo courtesy of Rose Photo.
By Gabrielle Moss
June 5, 2018

From the elegant floral arrangements, to the timeless white gowns, to the reception under absolutely massive bay windows looking out onto downtown Chicago, Cassaundra and Alishe White's April 2017 wedding looked like the end product of lots of traditional wedding planning. But while Cassaundra told Bustle their wedding day felt "like a fantasy," it didn't come together due to years of fevered late-night Pinteresting, or a single-minded quest to find the world's most perfect wedding cake topper. Instead, they entered a competition to be part of a mass gay wedding — and somehow ended up here instead.

From the very beginning of their relationship, Cassaundra and Alishe haven't been a couple interested in playing it safe. When they first met on a dating app in late 2014, neither was looking for anything serious, but within a few months, “I had ‘accidentally’ said ‘I love you’ and then I tried to take it back,” Cassaundra recalled. “That’s how fast we were moving from the beginning.” They moved in together in August 2015, and by September, they were engaged — Cassaundra proposed immediately following their first skydive (she'd originally wanted to do it mid-air, but the skydiving company nixed it).

“When it comes to planning events, we are very flexible and both kind of go with a lot of ambiguity,” Cassaundra said. Which is why, although they had begun planning a fall 2017 wedding and had even gotten serious about renting out a boathouse for the ceremony, Alishe was intrigued when a co-worker told her about an unusual wedding contest brewing at the Chicago Athletic Association Hotel.

Rose Kaz, of Chicago’s Rose Photo, was feeling bleak in the run up to the January 2017 presidential inauguration. The election had left the politically active Kaz dealing with “a crisis of faith about the world and politics,” she told Bustle. Deciding she wanted to take action to “really look forward instead of backwards,” an idea came to Kaz: a mass gay wedding. 15 couples, one day, one major event.

The hotel was immediately interested in Kaz’s vision, and she soon brought on vendors she knew from the wedding world, including Artistic Blooms floral, Leap Weddings videographers, and Marquette Avenue Events wedding planners. It was decided that the event would be called “A Love Supreme,” and couples interested in participating would fill out an application. From that applicant pool, Kaz and company would select 15 LGBTQ couples, who would all have their big day on April 9, 2017, in a large room, divided up into slices like a pie; each couple and their guests would witness every other couple’s ceremony, and celebrate simultaneously.

"All I heard was ‘sharing the day with 14 other couples'"

With that decided, the hotel and vendors put the original call out: “A Love Supreme invites LGBTQ couples to exchange their vows in a nontraditional, shared ceremony with the love of 15 partner couples for a reduced and all-inclusive wedding rate of $4,680 per couple. People of all genders and sexualities are invited to wed the loves of their lives in celebration of the beautiful variety of expressions that form our LGBTQ community.” Couples selected would receive a suite at the hotel, wedding photos and videography, wedding planning, floral arrangements, a DJ, an open bar, and a cake, and could invite 20 guests. Early reactions, remembered Kaz, were mixed: people who heard about A Love Supreme “were either like, ‘Yeah, that’s so great’ or 'So, is it like a drive-thru wedding? I don’t get it.'”

Alishe heard about the event; “I told Cassaundra this would be a great opportunity, we should at least try," she said. Alhough she wasn't necessarily excited about the "sharing a wedding with 28 other people" part, she thought it was a great chance to save time, money, and have a gorgeous wedding. Plus, it mostly felt like a lark — when they applied in January 2017, Cassaundra recalled, “We thought, ‘this isn’t going to happen.’”

So when, just weeks later, they found that it was indeed going to happen, and that they had been selected, the couple found themselves reacting differently. Alishe was excited about the possibilities this wedding could offer them, but Cassaundra was “a lot harder to convince … all I heard was ‘sharing the day with 14 other couples’ or that it was going to happen much sooner [than we had planned], or that we would have a smaller guest list. Not that I was only thinking of the negative — but it was just kind of like, ‘Oh, this is a big shift [from what we had been planning], and it's happening really fast and we need an answer.”

Like Kaz, the Whites had become concerned about the future following the 2016 election — and worried that the new administration might work to overturn same-sex marriage rights. So while they had been excited about their fall wedding, they also wondered, Cassaundra said, if “we need to go a little faster here” than scheduling the wedding in October 2017.

The couple mulled the situation for a few days, and then decided to get on board, ready to enjoy the positives — that they got to work with talented, high-end vendors who would cater to their tastes and wedding colors — and cope with the negatives — like explaining to loved ones that, yes, they were going to be part of an extremely high-end mass wedding. “Some people in my family had heard of it” said Alishe, “like my aunt, who was like ‘Oh my god, this is such a great opportunity.’” But other loved ones “were like, ‘What?’”

"We turned to each other, to try to get through that, because it did kind of feel lonely.”

As the planning process went on, details about the wedding shifted, including timing and the number of couples involved — which made communicating with family members who wanted to be involved in the wedding complicated. “We had to manage everybody and every situation,” noted Alishe, recalling that they gave loved ones some information about the event “but not too much … because honestly, we didn’t have a lot of answers then ... while [the wedding] was a really exciting opportunity, it was frustrating not knowing, and having to tell people that we didn’t know.”

Some details were hard to pin down because the Love Supreme vendors were still figuring them out, too. While the vendors had hoped for a diverse applicant group, most applicants were, according to Kaz, white men in their 30s through their 60s — so, in short, not that different from the kind of people who had traditionally been welcome at the Chicago Athletic Association. “So we sort of re-shifted our focus, and decided we would pick, at random, one lucky winner.” And in March 2017, it was revealed that those winners were Cassaundra and Alishe.

However, this didn’t eliminate the other lingering questions about the wedding. “Early on, we had to tell ourselves, ‘Weddings tear people apart! And we’re not going to be those people!’" said Alishe of dealing with the stress of not knowing all the details. "We had to keep reminding ourselves that, and that the only thing that matters is us.” A number of loved ones dealt with the uncertainty of the planning process by becoming hands-off, backing away from trying to be actively involved in the planning process. “That was very lonely,” recalled Alishe. “It felt almost like, we had to figure out, ‘Why don’t people care [more about the details of our wedding]?’ ‘Why aren’t they trying to help, why aren’t they asking more questions?’ It was because, after a certain number of times [of us saying ] ‘we don’t know, we don’t know,’ [our loved ones responded] ‘Well, tell us when you know something.’”

At a time in the wedding planning process when people are often in near-constant contact with friends and family, Cassaundra and Alishe found themselves a bit isolated. “When you get married, it’s supposed to be a big celebration amongst your loved ones," said Alishe, but she found that even planning a bachelorette party was a struggle. “I had originally planned a bachelorette getaway with my sister and my best friend in June, and then we were getting married in April, so of course that wasn’t going to work…so when that was cancelled, they were kind of like, ‘Whatever.’ It just was…disheartening.”

With family pulling back, “we turned to each other, to try to get through that,” said Cassaundra, “because it did kind of feel lonely.” “I didn’t realize how much it meant for a family to be involved in this day, and that’s just a lesson I had to learn, which was a hard lesson,” said Alishe. Because of that, “we really counted on those conversations with Rose and her team. We really counted on those conference calls where they’d say, ‘We got you, this is going to be beautiful.’ They helped kept our spirits up.” “One of the things the wedding says about us,” Cassaundra added, “is our ability to be flexible and really confident in not knowing. No matter what happens, we’re gonna be OK, and its gonna be awesome, because we believe in ourselves and believe in the people around us.”

However, the Saturday before the wedding, things finally began to come together. The couple threw a party at the hotel for the larger group of friends, family and co-workers they had originally intended to invite. Once they were able to see the space and the design for the wedding, their loved ones began to understand a bit more about the reasons the Whites were willing to take it on faith with A Love Supreme. “I think over the weekend, as everyone started to see the space, and how well the [planners] were putting together everything, they really started to enjoy themselves … and say ‘let's get on board [with the wedding]’” Cassaundra reported.

The next day went by in a blur — as Alishe noted, “When they say it goes fast, it goes fast.” The space lived up to all of their expectations — Cassaundra recalled that the ballroom looked reminiscent of Beauty and the Beast. But their brightest memories of the day are about fully connecting with their families. “It was touching to see my family with tears in their eyes,” said Alishe, “because [planning] had been an emotional rollercoaster, and … I stopped caring who came.” So she was bowled over by the support —“you can feel the love. There were so many comments about how beautifully it came together … it was just a feeling of joy and happiness and relief … we made all the right decisions.”

In the end, the wedding was about more than an unusual opportunity to have a wedding in an unexpected space. “I think it expressed as a couple how we move together," said Alishe. “As a couple, we are very strong — we’re very strong-minded, we’re very strong-willed, and when we want to do something, we do it. I think it also showed that we have good judgment, that love outweighs everything, and we have a sense of clarity and faith in each other and in our process that kind of made people believe in us.”

After all the confusion and not knowing, Cassaundra and Alishe ended up with more than just the memory of a dream wedding — they ended up with a greater understanding of who they are as a couple. And so did their families. “When it’s real, it’s real,” said Alishe. “And I think, so often, people say it, but you don’t see it. And with this experience, I think that people saw it. And I’m so grateful that people saw it [in our wedding], because it made it clear: ‘Yes, I know what I’m doing. Yes, we chose the right person for each other.’ So the wedding kind of made it real for everyone.”