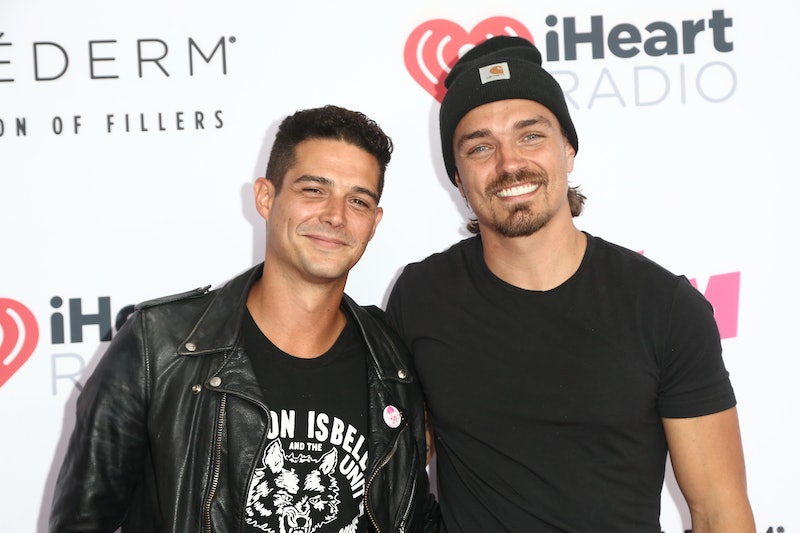 Hannah B. may still be trying to figure out who she shares the strongest connection with on The Bachelorette, but when it comes to super fans like former Bachelorette alums Wells Adams and Dean Unglert, they already know who they think should get that highly coveted final rose. In fact, Wells and Dean revealed their favorite Bachelorette suitors of Hannah B.'s season during a recent chat with E! News, who caught up with the pair during iHeartRadio's Wango Tango Presented by The JUVÉDERM® Collection of Dermal Fillers.

Dean admitted right away that he's been tuning into "every episode" of Hannah's journey and shared that "I've been a Pilot Pete fan since the beginning." He's referring, of course, to Peter who showed up in his pilot uniform during the premiere episode and has been successfully charming the Bachelorette ever since. (The name Pilot Pete is a nod to his Instagram handle.) Needless to say, he's a solid pick to win over Hannah's heart and is quickly becoming a fan favorite as well. (No drama plus a uniform automatically equals final rose material.)

But while Wells definitely agrees that Peter is a worthy candidate, he's rooting for someone else who he thinks could go the distance this season. "I like Tennessee Jed," he said before joking that "there's always a Nashville musician." This is in reference to the fact that prior to his move to Los Angeles, he himself was a DJ in Nashville. Perhaps he sees a little bit of himself in Jed and wants to see him come out on top.

After hearing Jed's name, Dean chimed in that he thinks Jed "seems like a nice guy" while also adding another name into the running based on sheer attractiveness: "Tyler C. is obviously just a good looking dude." But the good guys aren't the only reason Wells and Dean enjoy tuning in every week. As much as they like watching the whole love aspect of it all unfold, they equally relish in all the drama, much like the rest of us. "I really like watching dumpster fires burn," Wells stated. "So I really enjoyed the Luke P. thing, I really enjoyed the Cam thing. It's great."

The "Luke P. thing," as Wells so fitting put it, is in regards to how Hannah reprimanded Luke P. for acting too possessive of her and attempting to flaunt their relationship in front of the other guys she's currently pursuing relationships with on the show.

"It's annoying when Luke P., like, tries to flaunt our connection in front of the guys," she explained at the time. "There have just been some, like, little red flags about how he carries himself that bothers me a little bit. It's like this fine line that I really think is attractive to, like, it's the most unattractive thing I've seen in my life." (Luke P. has since addressed his actions on Instagram and acknowledged his flawed behavior.)

But while drama is fun to watch on the show, those who directly cause it never tend to last long, so Luke P.'s remaining time on the show may be limited. But as for Peter and Jed, whether one of them gets that final rose or not, they can take comfort in knowing they have a couple of Bach alums in their corner.

More like this
JoJo Fletcher & Jordan Rodgers Got Married In A “Playful & Fun” Wedding
By Grace Wehniainen
Kourtney & Travis Crashed His Daughter’s TikTok Live In Their 2nd Wedding Outfits
By Grace Wehniainen
Everything To Know About A Potential 'Love On The Spectrum U.S.' Season 2
By Gretchen Smail
Everything To Know About 'RHONJ' Season 13
By Brad Witter
Get Even More From Bustle — Sign Up For The Newsletter