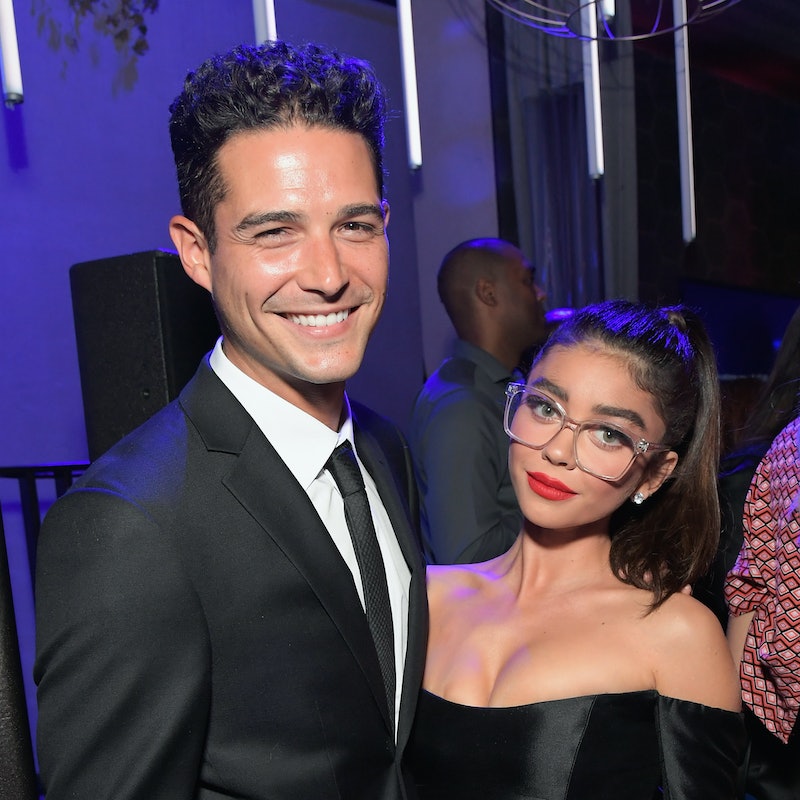 Plenty of celebrities celebrated their dogs on National Puppy Day, but Sarah Hyland and Wells Adams may have won the holiday. They used the special day to share adorable Instagram Stories of their pooches and remind you that every day is National Puppy Day. Sadly, Hyland's post almost didn't go up in time because she was in the hospital — again.

The Modern Family star began dating Bachelor in Paradise's smiley bartender in November 2017, according to E! News. Unlike most relationships, theirs was founded on FaceTime conversations from Hyland's hospital bed. According to a December 2018 interview with Self, the two met for the first time days before she underwent a second kidney transplant after her body rejected the first. The actor was born with a disorder called kidney dysplasia that continues to land her in the hospital frequently.

This time, a combination of symptoms sent her back, including a 104 degree fever, per Entertainment Tonight. She's very transparent about her health journey with her social media followers and fans. "When you stressed from having pink eye and a viral respiratory infection so yo #endo decides to kick down the door and say HELLO,” she wrote on her Instagram Story on Friday, March 22. Along with her kidney issues, Hyland suffers from endometriosis.

If anything, her regular hospital stays have revealed the essentials for admittance. "Always bring face masks and a silk pillow to the hospital," she wrote on Instagram from her bed. It's also made her appreciate the little things in life, like making it home just in time to post her pups in honor of the national holiday.

"I'm still sick," she said in a video on her story on Saturday. "I just wanna be better." But continued time with Adams and their doggos (and some fierce drag queens) are helping her remain positive. "Heaven is man, pup, @rupaulsdragrace," she wrote in the next story over a video of Adams sleeping on her shoulder.

In her interview with Self, Hyland talked about how grateful she is to have a supportive boyfriend while dealing with such chronically painful medical issues. Before entering this relationship, she learned how to be independent despite them. For example, she chose a kidney dialysis center close to the Modern Family set so she could continue working while receiving treatment. She's still that independent woman, of course, but Adams has made the valleys a lot easier to endure.

"We met each other for the first time three days before my transplant," she told Self. "He was texting me in the morning before I went into surgery, and we were FaceTiming the entire time I was in the hospital." She went on to say that he makes her feel the most beautiful, despite everything she's gone through and the scars she bares from going under the knife multiple times.

“He was there through all of that," she said. "I think that's why I feel the most beautiful in his eyes, because he still finds me beautiful after seeing all that. It was a really intimate start to a relationship to have to go through those hurdles at the very, very, very beginning when you're just even getting to know a person."

If they can conquer surgery in the first week of their relationship, what can't they get through? Every couple has something to learn from Hyland and Adams. Here's to hoping Hyland is feeling better soon, and that her pups are giving her lots of extra love.