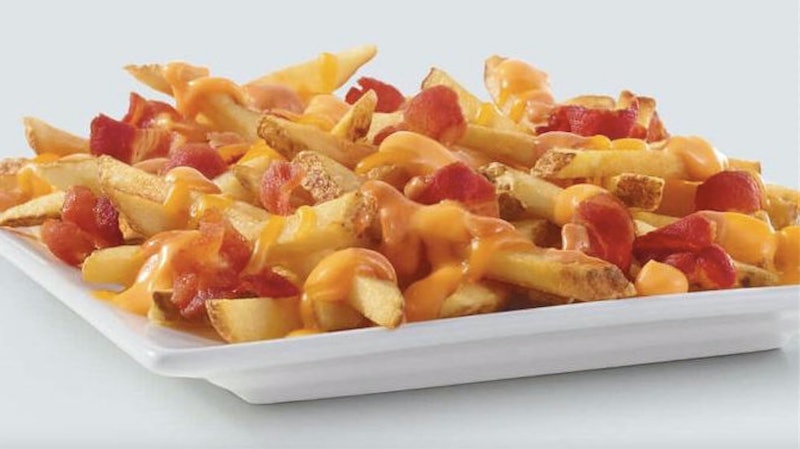 French fries — scratch that — any fried potato is a contender to be one of the most versatile foods in existence. It goes without saying the crispy, salty, golden snack is a marvel in itself, but when you add some extras, you're really in for a treat. You could approach eating french fries (and what with which you accompany them) any number of ways, but one pairing reigns supreme: cheese. With the introduction of Wendy's S’Awesome Bacon Fries, the chain is joining a growing group of embracing the storied potato and cheese relationship in more accessible ways.

In the U.S., arguably the most classic combination is fries and ketchup. In other parts of the world, accompanying dipping sauces vary; the Belgian pairing of mayo and fries comes to mind. But, professional fry eaters know when it comes to taste, dipping doesn't even compare to being drenched in gold (gold being cheese, naturally).

Though its name is, er, awesome, S'Awesome Sauce doesn't do a great job of describing what it actually tastes like. Food & Wine Magazine did a little investigation on the topic when the sauce first debuted in 2017. According to its report, Wendy's S'Awesome Sauce is serious business, having necessitated two years of formulation. The final product is a sauce that Food & Wine reports "mixes crowd-favorite condiments" to combine "tangy, sweet and smoky into one savory flavor". A tweet from last year describing the sauce (at which time was only called signature sauce) reveals that it is creamy, so perhaps you can expect it to at least somewhat resemble the ever-controversial Mayochup.

The addition of S'Awesome Bacon Fries comes only a month after Wendy's introduced a complementary main course: the S’Awesome Bacon Classic Cheeseburger. The burger, like the fries, embraces melted American cheese, three strips of applewood-smoked bacon (whole, not crumbled lie on the fries), and, of course, S'Awesome Sauce to a fresh beef patty. Crinkle cut pickles, sweet onion, and lettuce finish off the sandwich, and the final product is served on a lightly toasted bun. Plus, since it is Wendy's — home of the legendary Baconator — double and triple-stacked sandwich varieties are also available.

If it wasn't already there, Wendy's just might rise to the top of your list of favorite places to snag some french fries, thanks to its newest promotion. It doesn't matter if you're a little peckish or absolutely famished — for one dollar you can snag any size of Wendy's fries. That's right: at participating Wendy's, you can order a small, medium, or large fries for a buck. During the limited time promotion, just imagine how many fries you can for FIVE dollars. If you put a french fry bar at your next party, there is no question it will be a hit.