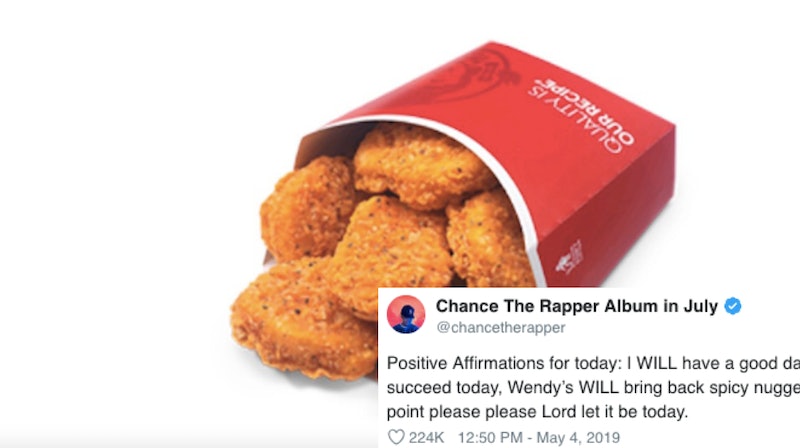 Wendy's lovers are fans of many things the fast food chain offers. The classic nuggets. The Frostys. The fries dipped in the Frostys, but probably not the fries on their own. And now, another beloved menu item is returning. Wendy's is bringing back Spicy Chicken Nuggets thanks to Chance the Rapper and 2 million other Spicy Chicken Nugget fans.

As reported by WAFB Baton Rouge, on Saturday, Chance the Rapper tweeted some positive affirmations. And while two of them were pretty general, the last one was a specific hope about Wendy's: "Positive Affirmations for today: I WILL have a good day, I Will succeed today. Wendy’s WILL bring back spicy nuggets at some point please please Lord let it be today."

At first, Wendy's responded directly to that tweet, "It won’t be today, but there’s always a chance." But then, later in the day, Wendy's posted Chance's original tweet along with this message:

Y’all keep asking, so here’s your chance. The people in charge say if you guys can get our tweet (this one right here) to 2 Million likes, they will bring SPICY CHICKEN NUGGETS BACK. Let’s freakin’ do this!

Wendy's also posted in response to the other "it won't be today" tweet to Chance, "Or maybe it will be today...we struck a deal with the boss finally, but it's gonna take some work."

Chance's tweet was posted on Saturday morning, the Wendy's 2 million likes challenge tweet was written Saturday afternoon, and by the wee hours of Monday, May 6, this happened:

Apparently, the person who does Wendy's social media is a fan of Spicy Chicken Nuggets! That, or they're just excited that they played a crucial role in making this happen. Naturally, Chance the Rapper then retweeted Wendy's tweet, bringing things full circle.

Wendy's got rid of Spicy Chicken Nuggets back in 2017, but they remained in seven cities: Austin, Dallas, and Waco, Texas; St. Louis, Missouri; Chicago, Illinois; and Madison and Milwaukee, Wisconsin. In a "break-up letter" released by the company in March 2017, Wendy's wrote, "Right now you’re questioning, 'why and how could this happen?' Well, simply put, not everyone in every city loved our Spicy Nuggets as much as you did." The letter then explained why some cities were keeping them: "While this is hard, there is some good news in all of this and that’s because not everyone felt the same way."

It's hard to trace what happened to Spicy Chicken Nuggets after that point, but it seems they eventually left those remaining cities, as well. For one, they don't appear on the general Wendy's menu online. For two, the "break-up letter" had this telling line: "These towns are all serving spicy nuggets…at least they are at the time we write this letter." And for three, Chance is from Chicago. Yes, he's a touring artist, who probably wants spicy nuggets in any city he's in, but if they were still available in his beloved hometown, he probably wouldn't be quite as concerned.