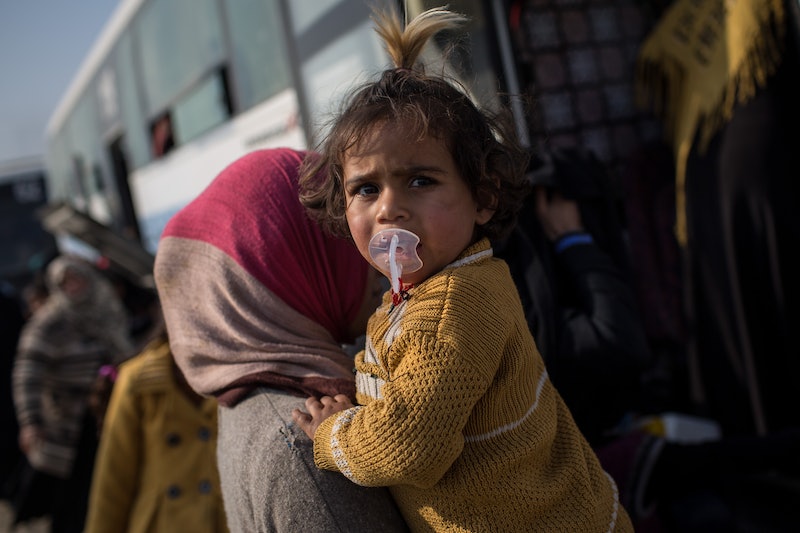 On Thursday, the U.S. military continued its offensives against ISIS strongholds in the Middle East by dropping the nation's largest and most powerful non-nuclear bomb in Afghanistan. White House Press Secretary Sean Spicer said that the United States "took all precautions necessary to prevent civilian casualties," but it has not yet been confirmed that no civilians were killed in the MOAB bombing of Afghanistan.

The Massive Ordinance Air Blast Bomb (MOAB), otherwise known as "the mother of all bombs," was developed in 2003, and has never been used in combat. However, the Pentagon did reportedly consider using the bomb that same year in Iraq, Marc Garlasco, a former Pentagon senior targeting official under Bush, told the Intercept. Ultimately, officials decided not to use the MOAB due to concerns for civilian safety.

In the same interview with the Intercept, Garlasco described the administration's decision:

We were going after a target, I would say, in a similar manner. But the concern there was that once the weapon was put forward as an option, we reviewed it, did a collateral damage estimate, and well let’s just say the collateral damage was impressive. It was decided that the civilian harm greatly outweighed the military gain.

The Trump Administration targeted an ISIS cave complex in the Nangarhar Province of Afghanistan, and the White House has said that the Afghan government was kept "in the loop" about the bombing. Furthermore, the strike, according to Afghanistan's U.S. command, "was designed to minimize the risk to Afghan and U.S. Forces conducting clearing operations in the area."

But the strike comes at a controversial time for the Trump administration. On Thursday morning, the military announced that a U.S. strike in Syria killed 18 Syrian fighters aligned with the United States earlier this week, and the Pentagon is currently investigating two previous American-led airstrikes that may have killed civilians in the Middle East.

In fact, Airwars, a nonprofit organization that tracks bombings, reported that March has been the deadliest month for civilians that the group has ever recorded. That figure surely worries those concerned that Trump's aggression in the Middle East may risk destabilizing the region and threaten U.S. soldiers.

The Pentagon has not yet announced how many casualties the MOAB caused, and the Los Angeles Times reported that no reports of civilian deaths have been recorded thus far.

However, that could still change. Chances are, the public won't know much about the effectiveness of the bomb or if any civilian casualties were involved until the U.S. military conducts a thorough investigation.