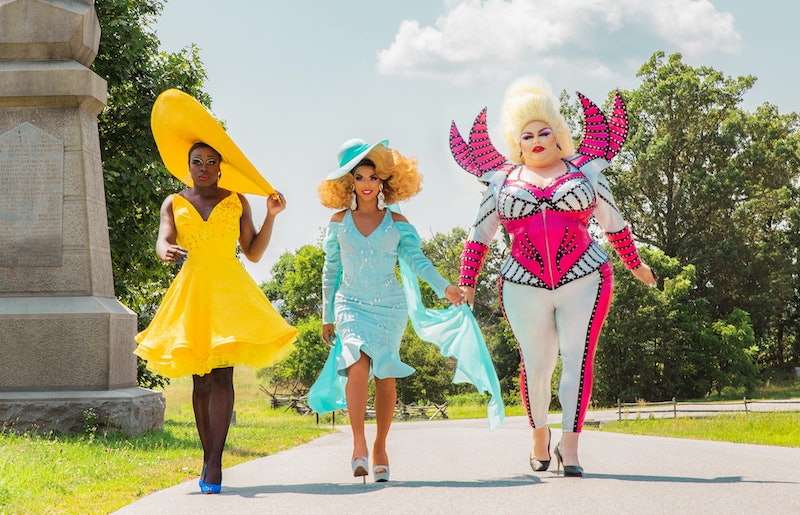 The next time you need a cathartic cry, instead of rewatching Queer Eye for the dozenth time, try HBO's We're Here. Out April 23, the show is a sublime Drag Race-Queer Eye hybrid starring three of the drag world's biggest icons: Shangela, Bob the Drag Queen, and Eureka O'Hara.

Not unlike Queer Eye's Fab Five, the queens on We're Here set out to make over the lives of people in small town America. But instead of transforming their homes, wardrobes, and refrigerators, this trio empowers their newly initiated "drag daughters" by putting them in full hair and makeup and helping them star in their very own shows. "Welcome to gay Six Flags," Shangela tells Bustle, because it's an emotional rollercoaster you'll want re-ride every time the credits roll.

The six-episode series highlights Hunter, an aspiring drag queen seeking community; Erica, a former anti-queer conservative Christian who wants a renewed relationship with her estranged bisexual daughter; and Darryl, a Gettysburg College administrator who wants to be a better ally, among many others. Though their stories are all different, they share a desire for personal growth at their core.

"It's actually [more] about the human experience and our connection to other people than it is about drag," Bob the Drag Queen explains. "Drag just happens to be a great package to experience it all." Shangela agrees. "Drag has a transformative power about it that instills in you a greater confidence," she adds. "It gives you that greater oomph... you're creating this beautiful armor for yourself to go out there and conquer anything." By the end of their journeys, that's exactly how their subjects feel.

As you might expect, it wasn't exactly easy rolling up to rural communities in full drag and magnificently elaborate, giant RVs (Bob's is literally a giant yellow Birkin). "As much progress as we've made with regard to acceptance for the LGBTQ community, that's not the experience everywhere in our country," Shangela says. "And it's important to stay in touch with the reality that we still have work to do."

In lieu of a red carpet premiere party that was canceled due to the pandemic, HBO and the We're Here crew are hosting a pre-show on YouTube at 8:30 pm. ET, featuring celebrity guests Drew Barrymore, Ellen Pompeo, and more. The network is also offering the first episode to everyone for free on YouTube. And although Shangela is bummed about missing a red carpet event, she's glad We're Here is premiering when stories of hope are needed most.

"It's something that reminds us about the importance of our humanity, our compassion, and our connection between each other," she says. "Everyone, I think, can relate with having a dream but never feeling like you were enough to really achieve it. Everyone can relate to having, you know, situations where your family doesn't support you for being who you are. These are the stories that we're highlighting across America. And even though they're related specifically to the queer community, they're not specifically queer stories."