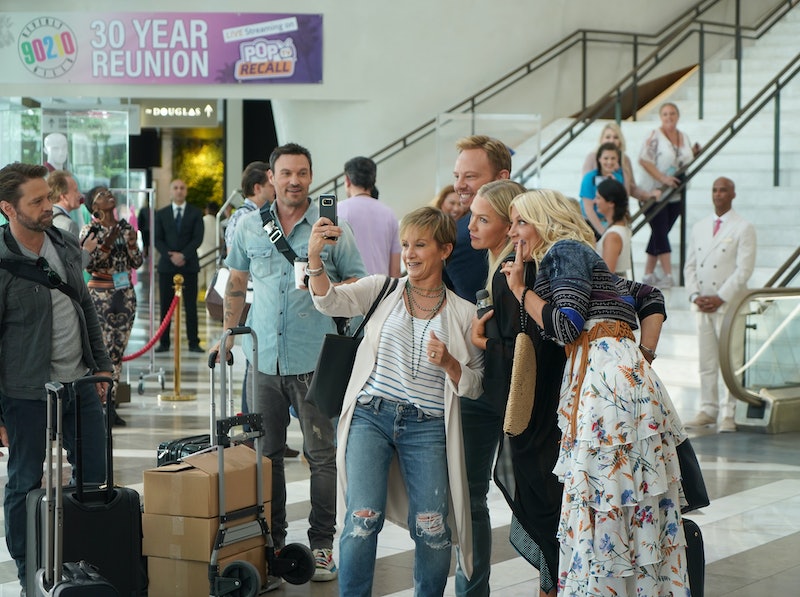 Growing up on a hit teen drama cannot be easy. Between the hours on set and managing the celebrity press, you're going to have to bond in some way. And those bonds can last a lifetime, despite the drama, which is basically the premise of the new Beverly Hills, 90210 spinoff. The revival relies on viewers to have some idea of what went down with the cast offscreen, and if you aren't old enough to have watched it go down in Teen Beat or something, it might surprise you that the BH90210 cast was only sometimes friends way back when.

At least they like each other well enough to get together 30 years after Beverly Hills, 90210 for this meta reboot, which follows fictional versions of all the actors and actresses trying to fictionally revive Beverly Hills, 90210 to revamp their careers, freshen up their public image, and pay some bills along the way. It's nice that everyone gets along now, but according to Jennie Garth, who played Kelly Taylor, the set of Beverly Hills, 90210 wasn't always exactly a welcoming place when she was a teen.

"There were times when it was worse than high school. The environment there was like: Are you kidding me? There was a lot of tension and unnecessary drama on the set," she told the New York Times. Shannen Doherty's behavior on the set of Beverly Hills, 90210 are the stuff of legend, and reportedly why her character Brenda Walsh was written off the show after four seasons. "There was a lot of tension directed from one specific person, and that one specific person had to reap the consequences from that," Garth said.

Of course, not everybody felt this way. Of his time on Beverly Hills, 90210, Ian Ziering, who played Steve Sanders, told Entertainment Weekly, "There was a lot of excitement. There was a lot of camaraderie. The cast hit it off really well." Obviously, everyone's experiences are different, and the pressures of fame can get to people in different ways. It sort of makes sense that the guys might have been aloof to the drama playing out between some of the other cast members.

That said, tragedy tends to bring people together in unexpected ways. According to People, the cast banded together quickly with messages of love and support after Luke Perry's unexpected death following a 2019 stroke. Maybe Perry's death was the thing that bonded them all back together to do BH90210 or maybe they knew it was time for a little reunion.

Either way, Tori Spelling, who played Donna Martin, told People how excited she was to have everyone back together. “We’re all really excited to get back to work with each other every day,” she said. “We’ve come full circle and it feels really great. This is the ultimate high school reunion and we’re going to be back together every day and I’m so excited.”

Whatever went down between the cast way back then seems to be all water under the bridge for now. But it does make for good jokes and plot points on the revival.