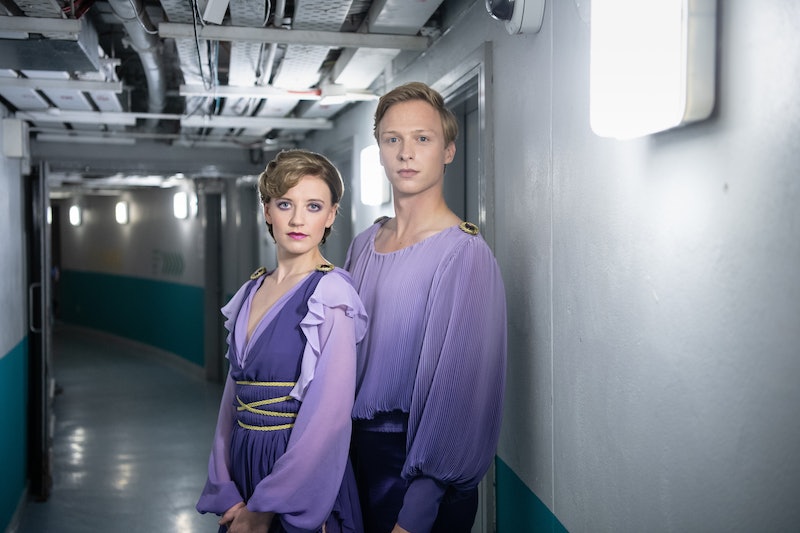 The one-off ITV drama Torvill and Dean will grace our screens on Christmas Day, and tell the life stories of the legendary Winter Olympic champions, Jayne Torvill and Christopher Dean. The drama will include the highlights of their careers, as well the rumoured romance which has followed the pair ever since they burst into the public arena back in 1984. But were Torvill and Dean a couple in real life?

Well, according to the Radio Times, the ITV drama does include a scene which answers this very question. In the scene, which is due to air on ITV1 at 9.15 p.m. on Dec. 25, Torvill and Dean acknowledge their attraction to each other and share a long-anticipated kiss. The romantic moment comes after the skating partners emerge victorious in a competition, however, the Dancing On Ice stars ultimately decide to not allow romance to get in the way of their careers – and any chances of a romantic fling come to an abrupt end.

Both Torvill and Dean have persistently denied there was ever a relationship between them, but did admit to have "dabbled" back when they were teenagers. Speaking to the Radio Times, Torvill said "Because the Boléro is very romantic, the media were convinced we were a couple. One journalist said, 'So, Chris, when are you getting married?' and he said, 'Not yet,' and that was it – there were reports that we were going to get married. I thought, 'Oh no. Why did you say that?'"

The 61 year-old went onto reveal: "We did actually kiss once – before we were a skating couple. We were in the back of the bus going to a league match, and it just happened. It was a one-off. We never talked about it afterwards. We laugh about it now," and continued "Chris comes out with things without filtering them, and on Piers Morgan’s Life Stories he said, "We dabbled. So that’s what it is now – Dabblegate. It was a kiss.'" And skating partner Dean also previously touched upon their teenage fling. He said: "Dabblegate was just a teenage kiss in the back of a bus. We were 14 years old, and teenagers in the most naive sense. We didn’t talk about it much after. The skating was everything and having a relationship just didn’t occur to us."

The fact that both have gone onto marry separately should also put to bed any rumours of a relationship between the Olympic duo. Back in 1990 Torvill married American sound engineer, Philip Christensen, and the couple have since been together for 28 years (and counting). After a difficult struggle with infertility and IVF, Torvill and Christensen decided to adopt – and are now parents to two teenage children, Kieran and Jessica. Torvill has previously opened up about her experiences of motherhood, and said in an interview with The Sun, "As a couple skating together it’s easy for the guy to go off and start a family, it wouldn’t affect his skating, whereas for me it would have stopped what we were doing. So I left it quite late. And I was into my forties by then."

Dean has also gone onto marry, and more than once. In 1991 he wed French-Canadian world ice dance champion, Isabelle Duchesnay, before divorcing in 1993. A year later Dean married American skater Jill Trenary, and then moved to Colorado where they raised their two children, Jack and Sam. However, according to the Radio Times, the marriage ended shortly before he began work on the ITV competition show Dancing on Ice, where he later began a relationship with judge Karen Barber.

This ITV drama sounds like it certainly isn't short on the juicy details surrounding the pair, and I'm sure it will make for some perfect Christmas Day viewing. Bring it on.