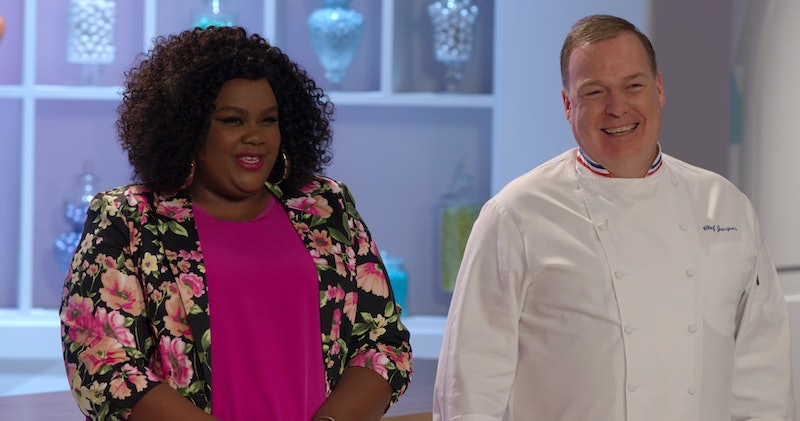 Anyone who’s seen an episode or two of Netflix’s Nailed It likely already knows that one of its backstage crew members also has a pretty great onscreen presence. Hosts Nicole Byer and Jacques Torres have the reigns throughout the cooking competition, which encourages contestants to try their hand at some seriously intricate cakes and cookies. The results are almost always hilariously bad, but what’s funnier is when Wes from Nailed It forgets a trophy or banters with Byer.

He’s listed on IMDB as a stage manager and assistant director, so he was bound to be around all the time anyway, working behind the scenes. But Torres told Vulture that Byer had a hand in making sure he took center stage. “I think Nicole made Wes. Nicole somehow got this idea of calling Wes all the time. He is a good-looking guy and everybody likes to look at him. Am I correct?” he said. Byer was also taking part in the ‘same interview with Torres, and expanded a little on what exactly happened. She said, "What happened was, they were like, 'And Wes is going to bring in the trophy.' And I was like, 'Then where is he? Where’s Wes?' Then it became a thing. Now I just abuse it.”

Byer said people are always asking her if Wes is single, and though she was hesitant to reveal her friend’s social media presence, he seems to already be garnering a following. His Instagram account is public, and he already has more than 9,000 followers, so feel free to give him a follow.

He travels, he celebrates anniversaries with his wife, he casually takes photos with the Terminator. He’s got photos from the Los Angeles Women’s March, from the open seas, and from Peru! It’s pretty great content, and will likely only make you love him more.

He doesn’t mind the followers, according to his comments on Byer's podcast, but he did say he was getting some graphic and unsolicited direct messages. Don’t do that, people! No one wants a creep sliding into their DMs.

Wes appeared on Byer’s podcast, Why Won’t You Date Me? earlier this year, and reminisced on how his role expanded. “It was the day we run through the camera positions, where we’re going to stand, we’re figuring out what the show’s going to look like,” he said, remembering how exactly he first came to be onscreen for the show. They needed to figure out how the trophy for the winner would make its way to the contestant. For the first day, until something else was decided, Wes was chosen to simply bring it out. “And then it became a full-blown thing.”

When it comes to his newfound fame, Wes seems to have a good sense of humor, but he hopes everyone knows he’s actually good at what he does. “It’s funny. It’s weird and embarrassing. Especially because the first and second season, the entire gag is that I’m terrible at my job,” he said. So give the guy some credit.

He and Byer both noted that he’s pretty easy to find on Instagram, and Wes said he neglected to make his feed private before tons of Nailed It fans added him, so that’s a reality he’s currently living. He doesn’t mind the followers, according to his comments on the podcast, but he did say he was getting some graphic and unsolicited direct messages. Don’t do that, people! No one wants a creep sliding into their DMs.

Wes has become a staple of Nailed It, and viewers are obsessed. Hopefully he sticks around just as long as contestants keep baking questionable goods.