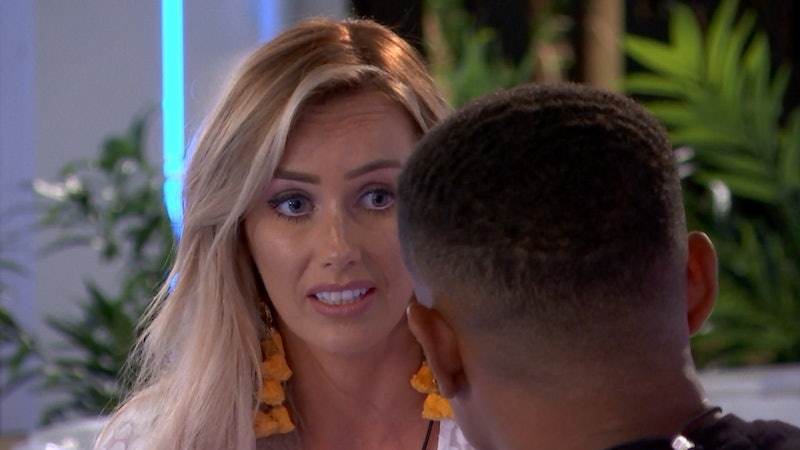 There was a lot to digest during Tuesday night's episode of Love Island, and if the fiery scenes didn't leave you sweating more than the sweltering heatwave currently passing over the UK, well, there your emotional thermostat might need a little restart. The epic episode saw Megan Barton-Hanson dump Eyal Booker before swiftly declaring her intent to pursue a romance with Wes Nelson, and later, doing just that. As a result, Love Island's Wes and Laura split up in possibly the most brutal way possible on national television.

Tuesday's episode began with Megan dumping Eyal, telling him that their banter was just not up to par — or specifically, that he was no Jim Carrey. Following that — and a cheeky kiss with Wes during the Snog, Marry, Pie challenge — Megan then made her feelings very clear to the engineer in a private conversation between the pair, before asking him for yet another kiss.

She explained: “So this is obviously really awkward for me. I’m quite an awkward person. I think it’s pretty obvious that I do really fancy you and I just felt like if I didn’t say something I’d regret it massively. I didn’t know if it was just on a friend level, but more and more I do really find you attractive and I can’t help it."

Megan added: "I don’t want to tread on Laura’s toes and she’s a lovely girl, but from an outside point of view I feel like she’s a lot older and she said earlier she’s in here looking for a husband. To me you’re 20, you’re so much fun and I just wanted to know where your head was at.”

Following their conversation and almost kiss, Wes decided to talk to Laura about potentially making more of an effort getting to know Megan. Pulling Laura to one side, he explained: “So basically, today people have been saying I’ve been off, I’ve been distant, I’ve been not fully affectionate. What I’m saying is, I’m being honest with myself and today I just took time to reflect on what we have and what I feel like in a sense and I feel something’s missing.”

And — as you can probably guess — that went down about as well as a lead balloon.

Ultimately, Laura jumped off the her-and-Wes-ship before she was pushed and told Wes things were definitely over. "I can’t believe you're f**king mugging me off," she added. "It’s a f**king joke. You will never, ever, ever get this chance again. Don’t ever speak to me.”

Viewers on Twitter were pretty much in agreement that ditching Laura was a poor move on Wes' part and that the whole debacle left him looking pretty bad. Here are just a few of Twitter viewers' angry reactions. And, by reactions, I mean memes:

As viewers on Twitter were also quick to point out, a surprising third party who could be blamed for the events leading to Wes and Laura's break-up is one Adam Collard. Some viewers on social media were quick to argue that Adam too played a big part in Tuesday night's proceedings, both in providing a lot of previous examples of switching love interests and also in encouraging him to test the waters with Megan.

Here are the memes for that:

All in all, the episode was pretty uncomfortable to watch and problematic on lots of levels, not least how Laura and Megan spoke to each other after it all went down. So will Wes officially hook-up with Megan? Will Laura look for love elsewhere?