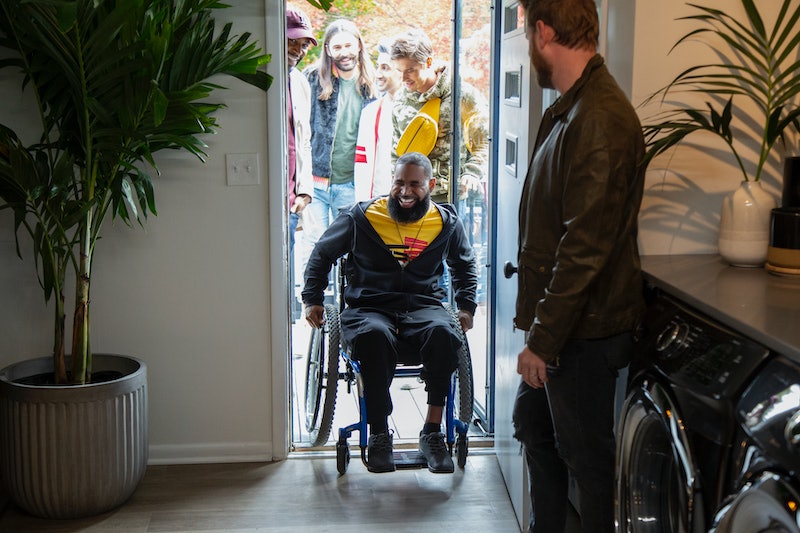 Yet another season of Queer Eye is about to hit Netflix, and that means there's a whole new cast of heroes to familiarize yourself with. Take Queer Eye star Wesley, for example. He's the series' first hero with a physical disability, and per Entertainment Weekly, he even has a nonprofit that benefits other people with other disabilities. Judging by Wesley's Instagram account, that motivational mindsey extends to his everyday life. He's trying to use any hurdles he might have faced to inspire others to succeed.

According to the same EW report, Wesley didn't always get around by wheelchair. Six years ago, he was injured and ultimately left paralyzed by a gunshot wound. Since then, he's been trying to "battle his demons" and uplift his self-image, which is probably what the Fab Five will be helping him with. It's sure to be a tear-jerking story, but Wesley's Instagram feed is anything but gloomy about his circumstances.

We can't define him by his social media alone, though. "My life is bigger than social media," he wrote in one caption. "I want to provide an impact to those in the communities I come from. I take pride in wanting to empower my people to be more, do more, live more."

But still, with that in mind, let's see what we can learn about Wesley based on his IG.

Wesley has many posts about his hometown of Kansas City, Missouri, and is involved in community efforts around the area. "If you have been following my journey then you know that I’ve received some tremendous blessings," he wrote in the caption above. "This only happened because my main focus is all about inspiring others and creating change."

He Has A Daughter

He said being a father to a little girl has given him strength like nothing else has.

He Was Inspired By Nipsey Hussle

Wesley posted a touching tribute to the late rapper Nipsey Hussle, who was shot and killed in May.

Wesley posted earlier this year that he had gone skydiving, despite being paralyzed, and wasn't about to let any physical limitations destroy the plans he had.

"I have learned to accomplish more things in life all because I’ve opened up a book. My fear of thinking I could not be successful has not only went away but now I consider myself fearless," Wesley wrote. "Reading has made me a beast in life it gave me power when no one else could."

Wesley said after growing up overweight and facing complications after his injury, he's taken dietitian courses and is taking better care of his body. Maybe he'll teach Antoni a thing or two!

Wesley definitely seems like the kind of exceptional example Queer Eye likes to spotlight, and rightfully so. He's been through things that most people can't imagine, and he's using all his life's experiences to help better the people and community around him. Hopefully when viewers are able to see him meet up with the Fab Five, we'll get an even better sense of who he is and what he stands for.

More like this
What’s New On Netflix: The Return Of 'The Umbrella Academy'
By Arya Roshanian
Yes, Luca Bish Really Doesn’t Drink Alcohol
By Shahed Ezaydi and Sophie McEvoy
'Love Island’s Latest Bombshell Has His Mind Set On One Girl In Particular
By Sophie McEvoy
This 'Love Island' Bombshell Is Ready To Dance – Never Mind Step – On Toes
By Sophie McEvoy
Get Even More From Bustle — Sign Up For The Newsletter