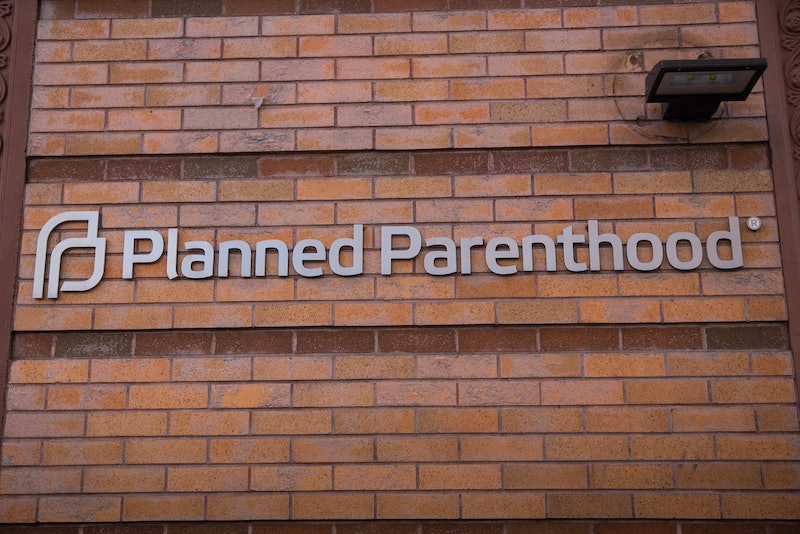 With an ACA replacement bill that would defund Planned Parenthood and restrict abortion access causing chaos, a lot has been focused on Donald Trump's ultimatum that Planned Parenthood could keep its funding if they stopped performing abortions.

Which is odd, because although Planned Parenthood currently receives about $500 million in federal funding annually, but they stress that that money doesn't go toward abortions. “Let’s be clear: Federal funds already do not pay for abortions,” Dawn Laguens, the executive vice president of the Planned Parenthood Federation of America, said on Monday to The New York Times. “Offering money to Planned Parenthood to abandon our patients and our values is not a deal that we will ever accept. Providing critical health care services for millions of American women is nonnegotiable.”

What the Obamacare replacement bill would do is stop Medicaid from working with Planned Parenthood, keeping countless women from access medical care they need— cervical smears, breast cancer screenings, STI tests— just because they continue to perform abortions, which are both legal and not funded by federal funds. It's a terrifying prospect, but the potential impact is probably best understood by those in the field — the abortion providers themselves.

"If Planned Parenthood were no longer able to provide services, access to abortion would drop drastically across the country."

"Planned Parenthood provides essential preventive healthcare for people across the U.S, including abortion services and other essential services such as contraception, STI screening and treatment, and cancer screening," Dr. Marisa Nádas, an OB-GYN at Jacobi Medical Center, NY and a fellow with Physicians for Reproductive Health, tells Bustle. "In terms of access to abortion, Planned Parenthood plays a critical role in our country. Eighty-seven percent of counties in the U.S. do not have an abortion provider, and in many states, women drive for hours to access this essential service. If Planned Parenthood were no longer able to provide services, access to abortion would drop drastically across the country."

Not everyone agrees with abortion —and that's fine, no one is going to make anyone get one. But there are clear negative consequences of prohibiting affordable access to abortion. "There are many negative side effects of decreased access to abortion," Nádas says. "First and foremost, women will still seek and obtain abortions, but it will be under poor conditions, leading to an increase in women dying from unsafe procedures. Women will plunge into poverty as they drain all resources to travel far distances to the nearest abortion provider, and/or to pay out of pocket for their procedure." It's not fair to put those extra pressures on women or our society.

Although the potential health side effects for women affected are horrific, let's not forget one of the fundamental problems — it prohibits women from doing what they want with their bodies. And that represents something bigger.

"Part of agency and determining one’s path is the ability to control if, when and how to have children," Nádas says. "Taking away that control from women means taking away their agency, ultimately making reproduction a barrier to education, economic independence, and self-determination." It's not treating women as people. And it's not OK.

Planned Parenthood Provides So Much More Than Abortions

Planned Parenthood is a vital resource — and there is currently nothing that could fill its gap. Not only is it a huge provider of birth control, it also gives essential health screenings to women who may not have anywhere else to go. In fact, their 2013-2014 annual report put only three percent of Planned Parenthood's procedures as abortion services, and it's really damaging to ignore all of the other services it provides.

"There is no structure currently in place within our healthcare system that could step in to fill the gap that Planned Parenthood would leave if politicians continue their efforts to defund," Nádas says. "Millions of people would be without access to high quality affordable reproductive health services. This means women would not be able to access essential services like screening for cervical cancer and breast cancer."

"This would be a huge step backward for our country in terms of medical and public health advances made over the last several decades."

Maybe that doesn't sound like that big of a deal. Maybe there's an assumption you can just get them elsewhere. But so many areas of the country do not have access to affordable medical care. The consequences of removing services like affordable cancer screenings could be huge. "As a physician, I have worked in several countries outside the U.S. and seen firsthand the devastation of cervical cancer when regular screening and treatment is not available," Nádas says. "This would be a huge step backward for our country in terms of medical and public health advances made over the last several decades."

So when you talk about defunding Planned Parenthood, it's important to realize how far-reaching the effects are.

It Will Effect Women In Need The Most

The extra perverse effect of defunding Planned Parenthood and limiting Medicaid coverage is that it would affect the women who are already struggling. "Already, I see too many women who are denied abortion care because of their income and how that directly affects their well-being," Dr. Willie Parker, Board Chair of Physicians for Reproductive Health and a physician who provides abortions throughout the South, said in a press release. "This bill would chip away at many women’s ability to have insurance coverage for their medical needs and is the opposite of what my patients need for themselves and their families."

Planned Parenthood and Medicaid both aim to ease the financial burden on those who have low incomes and may not have access to other forms of medical care. “Many communities rely on Planned Parenthood for birth control, cancer screenings, and other vital preventive care," Parker says. "For people who rely on Medicaid coverage — including people of color, people with low incomes, and those who live in rural areas — and already face obstacles to getting health care, removing Planned Parenthood as an option would put essential health services further out of reach." If they're already fighting to receiving basic care, are those really the groups who should be punished?

It Goes Beyond Planned Parenthood

The truth is, Planned Parenthood isn't the only potential loss in this bill. "The proposed changes to our national health care system go beyond defunding one organization," Melissa Grant, VP of Health Services at carafem tells Bustle. "The new proposal blocks people who depend on public insurance for essential preventive health care from seeing the doctor of their choice. The government barring people who rely on plans like Medicaid or Medicare from continuing a relationship with their trusted health care provider is wrong and sets a dangerous precedent." Take a step back and look at the whole picture.