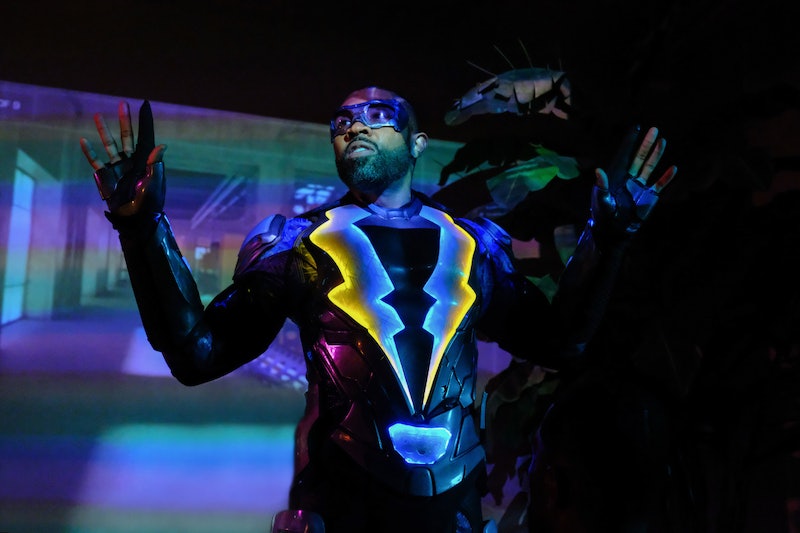 Superheroes are nothing without their superpowers. Without them, they’re just… well, normal people. Black Lightning’s superpowers, as you may be able to guess from his name, have to do with electricity. Interestingly enough, the CW's newest series stars just one of several black superheroes who have electric-based superpowers. However, he's unique because electricity manipulation isn't Jefferson Pierce's only super power.

With that name and that costume, you may be surprised to hear that not all of his superpowers are electrically-based. After all, Jefferson in the comics was an Olympic level athlete, and it takes a kind of superhuman dedication and strength to make it there, no matter what the sport. Black Lightning boasts enhanced stamina, strength and endurance. In addition, he became a master in martial arts, thanks in part, to Batman, while he learned boxing skills from the superhero, Wildcat, who is an acrobat with genius level intelligence.

With a name like Black Lightning though, it would stand to reason that he would be able to throw some around. The general term for the character's electricity-based powers is electrokinesis: the ability to produce, control, and manipulate electricity. Over the course of his career as a superhero in the comics, he learns how to control electricity to do any number of superhuman feats, including using electricity to fly, teleport and heal. Jefferson can also fire off electro-blasts and generate electrical force fields.

But, as mentioned earlier, Black Lightning is far from the only black superhero to have electricity-based superpowers. Look at other comic book characters, like his own daughter, Lightning; Storm from X-Men; Static; Miles Morales; Juice; Black Vulcan; Soul Power; Volt; Shango the Thunderer; Thunder Fall; and Jakeem Thunder. Of course, not all black superheroes have those kind of powers. Black Panther, Green Lantern (John Stewart), and Luke Cage are some examples, however, it is worth considering why there are so many black superheroes with a similar superpower. Charles Pulliam-Moore wrote about the trend for io9, and he argues that it may come from a problematic place. Pulliam-Moore wrote:

“The Black Electricity Trope reads like a distant cousin to the Magical Negro, in that they’re both established formulations of a character whose most defining qualities are a preternatural understanding and command of natural force … The idea that black people are inherently closer to nature is one of the larger undertones to the problematic magical negro trope that many black characters are often hamstrung by.”

Fortunately, the series is far from completely focused on just what Jefferson has the ability to do. The Black Lightning (series co-creator: Mara Brock Akil) premiere opened up themes of family, community, racism, and protest. According to ComicBook.com, Black Lightning series co-creator Salim Akil told press at a set visit, "I’m doing a show about a man who has a family and is trying to affect his community. Someone asked me, what’s the most difficult aspect of doing the show, and it really is me coming to terms with that he has powers, because I could write a whole script without him ever using his powers, which nobody wants me to do.”

With a transition from one medium to another, some things can get lost in translation. The specific powers that the series will reveal that Jefferson has or doesn’t have may not exactly match the comics. Perhaps he can’t fly or teleport in the TV version, but at this point, that's just speculation. At this point, fans know that he's very much a conductor of electricity, and that he's able to fight off several armed assailants at once. But Jefferson's most difficult task will be to protect his students and his family from problems that plague the real world too. And he'll need more than superpowers to do that.